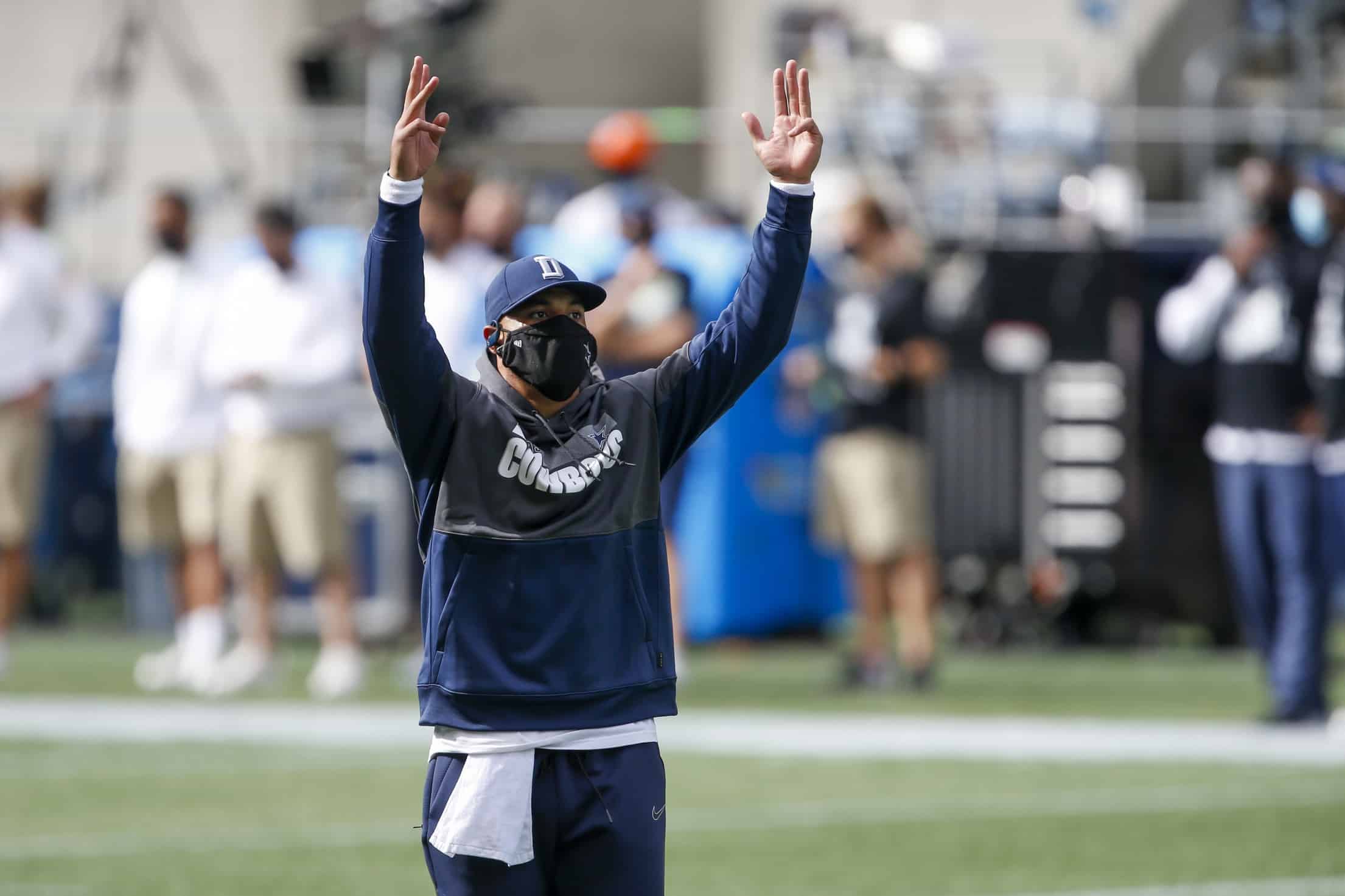 Sep 27, 2020; Seattle, Washington, USA; Dallas Cowboys quarterback Dak Prescott (4) reacts during a pregame warmup drill against the Seattle Seahawks at CenturyLink Field. Mandatory Credit: Joe Nicholson-USA TODAY Sports
What's in this article? Click to show
What is the fantasy impact of Dak Prescott signing with the Dallas Cowboys?
What impact does the extension have on the fantasy value of other Dallas Cowboys players?
How has Dak Prescott performed as a fantasy asset in his career?
Want more fantasy football analysis and news?

After a year of back and forth, the Dallas Cowboys and QB Dak Prescott have come to terms on a new contract to keep him wearing the star for the next four years. Dak Prescott’s return to the Dallas Cowboys has a massive ripple effect on the 2021 fantasy football landscape, as this is a team loaded with incredible talent.

What is the fantasy impact of Dak Prescott signing with the Dallas Cowboys?

In a word, massive. The implosion of the Dallas Cowboys’ offense in 2020 once Prescott’s injury occurred was seismic. They went from the No. 1 offense in football to the New York Jets’ level of anemic. The combination of Andy Dalton, Garrett Gilbert, and Ben DiNucci simply could not maintain the level of play that Prescott could achieve. In fairness, very few players can play at his level, and he now has the bank account to prove it.

According to NFL Network’s Mike Garafolo and Ian Rapoport, Dak Prescott signed a four-year deal worth $160 million that could reach $164 with incentives. $126 million of his contract is guaranteed, and he also negotiated a no-trade clause as well as a no-tag prevision.

For fantasy, the latter part is the crucial piece to note. For us, security is king. Knowing that Dak Prescott is tied to one organization for at least four years helps stabilize his value as we don’t have to worry about a landing spot after one season.

Where does Dak Prescott rank among quarterbacks for fantasy in 2021?

This question’s answer requires a two-part response; both redraft and dynasty fantasy football are different formats for gauging value.

Let’s start with the upcoming 2021 redraft fantasy football season. There is a case to be made for Dak Prescott to be the QB4 off the board in fantasy right now.

After seeing Prescott’s 2020 onslaught (averaging over 27.9 PPR points), it’s hard to ignore the upside. I would have him behind Patrick Mahomes, Josh Allen, and Kyler Murray right now. As for Lamar Jackson and Deshaun Watson, that’s a different story. Jackson has the rushing upside but needs receiving options. As for Watson, without knowing where he is even going to play today, I have to give the nod towards Dak Prescott in fantasy.

When it comes to dynasty, our scope has to widen to a more long-term approach. Knowing Dak Prescott will be on a loaded Cowboys offense for the next four years is massive. Prescott, 27, is my QB5 in dynasty, sitting just behind Watson. He is a locked-in QB1 and, in Superflex formats, should come off the board inside the first round of startup drafts.

What impact does the extension have on the fantasy value of other Dallas Cowboys players?

The first person to start with is RB Ezekiel Elliott. I highlighted him back on January 1 as a buy-low target because apparently everyone had forgotten about him.

From Weeks 1 to 5, Elliott was the RB3 in PPR scoring. He rushed 89 times for 364 yards while scoring 5 rushing touchdowns. Elliott added 24 receptions on 32 targets, 173 yards, and another score. All in all, Elliott averaged 22.3 PPR points per game. The Dallas Cowboys were firing on all cylinders. They were the No. 1 offense in the NFL, and Dak Prescott was looking like an MVP candidate.

From Week 6 on, he was the RB24. His ppg had dropped by 50% to 11.2 in PPR scoring, and the recency effect is real. People forget that Ezekiel Elliott was the only RB in 2019 to be an RB24 or above in every game. Let me ask you this question. How many true workhorse running backs are left in the NFL? Guys who are treated as a three-down RB and aren’t subbed off for a “specialized” player? You can fit them all on one hand.

Cowboys RB Ezekiel Elliott is a top-5 RB who will go in the second round of drafts come August. I would take advantage of this, as Dak Prescott will have this Cowboys offense clicking on all cylinders for us in fantasy.

I lump all of them together because they all saw a similar effect once Dak Prescott was out of the lineup. After all, when an offense can’t move or score, fantasy totals plummet.

Cooper ranked as WR12 in ADP, followed by Gallup at WR31 and Lamb at WR39. With Dak Prescott back with the Dallas Cowboys, these players should all see their fantasy value skyrocket. Additionally, it will not surprise me to see both Cooper and Lamb going inside the top 20 at the position, with Lamb on the verge of a breakout.

How has Dak Prescott performed as a fantasy asset in his career?

In fantasy, the popular thing to do is wait on a QB or think that streaming one weekly is prudent rather than investing the capital early on. I understand this, as I have typically been a champion of the theory. However, there is something to be said about the week in/week out security of a top-end QB brings to your team. That high-end upside is what Dak Prescott brings to your 2021 fantasy team.

During these seasons, he was the QB6, QB10, and QB10, averaging 17.3 points per game (with 4 points per passing TD scoring setting). The most significant part of Dak Prescott’s game is his rushing upside that boosts his fantasy floor. Of his fantasy points per game, 4.21 (24.3%) came on the ground.

While brief, Prescott dominated in his 2020 season

Entering the 2020 season, fantasy expectations were high after adding more passing weapons, and Dak Prescott was on an MVP-type start to the season.

Unfortunately for Dak Prescott, his season was cut short, but not after showing the world he deserves a massive contract. In 4.5 games, Prescott threw for 1,856 yards (371.2 yards per game), completing 68% of his passes (151 of 222) with 9 touchdowns and adding 3 more on the ground.

Dak Prescott’s first five games single-handedly won fantasy managers their weeks, scorching defenses to the tune of 27.9 PPR points per game (QB2). In his four complete games, Prescott was the QB19, QB1, QB4, QB1. Given the timing and the nature of his injury, there is no reason to believe it will carry over into the preseason or Week 1.

While not a tier-one QB in fantasy rankings, Dak Prescott is firmly inside the top 10 at the position, with the chance to be top three each and every week in 2021.