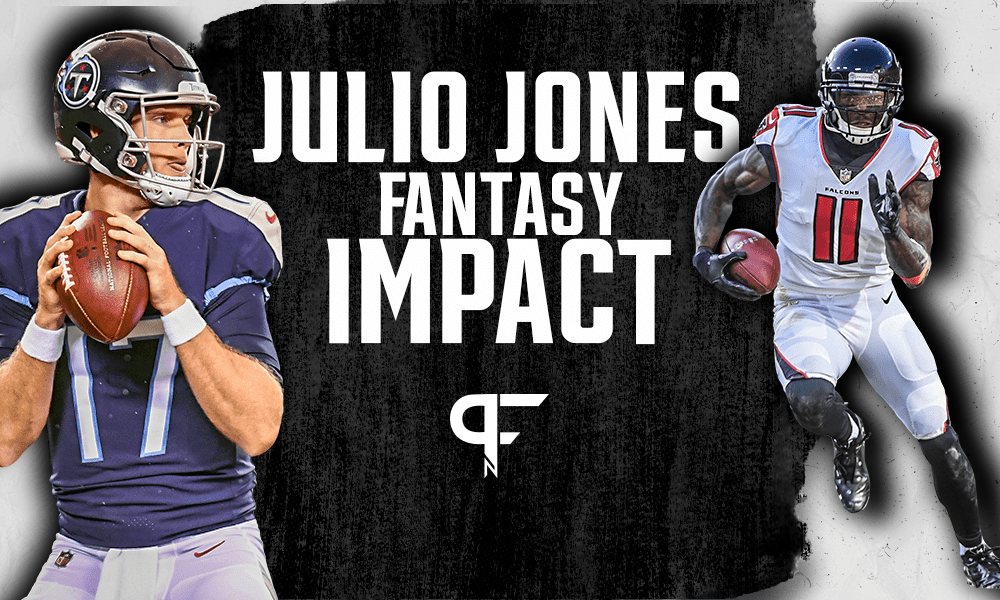 Julio Jones Fantasy Impact: What can we expect from this Titans offense?

After weeks of speculation and rumors, Julio Jones has officially been traded to the Tennessee Titans. Not only does this massive move shake up the NFL, but its ripple effects hit fantasy football managers as well. With the news still fresh in our minds, how does the Jones trade impact the fantasy value of Jones, A.J. Brown, Josh Reynolds, and Ryan Tannehill?

The Atlanta Falcons made it clear they were looking to trade the perennial Pro Bowl receiver during the offseason. For several weeks, the Titans were seen as the leader in the clubhouse, given both cap space and a need for receivers.

Even at 32, Jones remains one of the all-time greats and can take over any game. In 135 regular-season contests, Jones racked up 848 receptions for 12,896 yards and 60 touchdowns. Jones’ 95.5 yards per game is the highest average in NFL history (minimum 100 games).

From a fantasy perspective, Jones has been nothing short of phenomenal. Since his rookie season in 2011, Jones’ average finish in PPR scoring is WR17.5, scoring 310.94 points per season and 18.66 points per game.

How does the addition of Jones impact the Tennessee Titans’ passing game for fantasy?

As mentioned above, there is more than enough room with the Titans for Jones to carve out a sizeable role on offense. With that said, it will not be what he has grown accustomed to with the Falcons and their pass-happy offense. Just in 2020 alone, the Titans ran 9.1 fewer passing plays per game and called for a pass on just 49.7% of their plays (30th) –13% less than the Falcons (ninth).

This makes me wonder if we see a change in offensive philosophy akin to what happened in Buffalo last season after the addition of Stefon Diggs. While I do not believe it will be to the same extreme level of change, the Titans would not bring in Jones and continue to be a low output offense.

The lone knock in fantasy for Jones has always been the end zone, having scored 6 or more TDs just four times. That was always offset by volume, especially in PPR leagues. I don’t see that being the case in 2021, but he is a locked-in WR2 for fantasy. If they did not have someone named Derrick Henry for red-zone purposes, I would have been inclined to move him higher for fantasy.

When the news was announced, that sound you heard was not the songbirds outside your window but the collective groans of all A.J. Brown managers. 2021 was going to be the year he would ascend higher than Dogecoin ever dreamed. With Corey Davis and Jonnu Smith on other teams, Brown had the passing game virtually to himself. For many, he was the WR1 in 2021 redraft leagues, given the projected volume and propensity to find the end zone.

While not the WR1, Brown remains a top-12 receiver in fantasy football after the Jones trade. Even in a “worst-case scenario” where Jones eats up all of the production opened up from Davis and Smith, Brown has already shown he can produce elite receiver numbers.

Will Brown have the season we initially thought? No. But will Brown be a fantastic receiver? Yes. Now paired with Jones, it could lead to his best fantasy season to date.

Josh Reynolds has been an interesting case this offseason. It’s the discussion of talent vs. opportunity. On paper, Reynolds is average. Having played in 24 games for the Rams, Reynolds amassed 1,450 yards and 9 touchdowns on 113 receptions. In 2020, he had a career season with 53 receptions on 81 targets for 618 yards and 2 touchdowns.

But after signing with the Titans and the potential opportunity in front of him, fantasy managers were willing to overlook the play for the chance of high volume. Now, that shot of volume is gone with Jones in the fold. But perhaps this is not a bad thing.

Reynolds now faces teams’ third CB, which could lead to more efficient touches. But without an injury, it is unlikely that Reynolds will see enough targets to be fantasy-relevant for 2021. I would be willing to take a shot on him in best ball for the odd week he does something unexpected. The initial warm and fuzzy feels from the offseason are gone now.

The biggest winner of the Jones trade for both fantasy and the NFL is Ryan Tannehill. The Titans essentially swapped Corey Davis and Adam Humphries for Jones and Reynolds — that’s a massive win.

Fantasy managers also overlook his rushing ability, which is a must for a quarterback anymore. Tannehill rushed 43 times for 266 yards with 7 touchdowns (tied for fifth with Lamar Jackson).

Now, coming off a 40-touchdown season and adding Jones, I can get Tannehill as the QB17 in ADP? Sign me up every single day of the week. I was already higher than the consensus on Tannehill as my QB12, and I will now move him up a few more spots. As one of the last to select a QB in my drafts, I will have my eyes squarely fixed on Tannehill this season. The impact Jones will have on his ceiling for fantasy can’t be understated.

Be sure to follow us on Twitter (@PFN365) to stay current with all things around the NFL and the upcoming 2021 fantasy football season beyond Julio Jones and his fantasy impact on the Titans. Also, continue to visit Pro Football Network for NFL news and in-depth analysis while also visiting our fantasy football section for more coverage and up-to-date rankings.

Fantasy TE Tiers and Streamers Week 7: Is Ricky Seals-Jones a starter in Week 7?