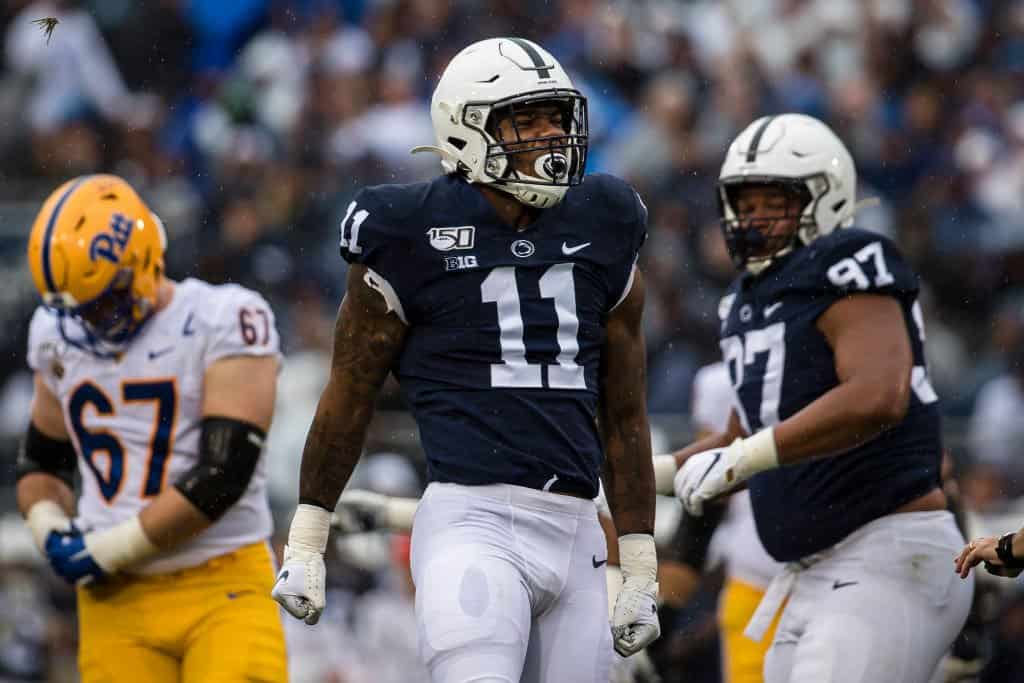 STATE COLLEGE, PA - SEPTEMBER 14: Micah Parsons #11 of the Penn State Nittany Lions celebrates against the Pittsburgh Panthers during the first half at Beaver Stadium on September 14, 2019 in State College, Pennsylvania. (Photo by Scott Taetsch/Getty Images)

How does the most recent 2021 NFL First Round Mock Draft shape up according to Pro Football Network’s Mock Draft Simulator? Let’s break down how the first round of the 2021 NFL Draft could work out and see where players could wind up as teams look to address their needs heading into the 2021 NFL season.

Unsurprisingly, the Jaguars kick off this mock by taking Trevor Lawrence. Lawrence is considered one of the best quarterback prospects to come out of college since Andrew Luck. At this point, it would be shocking if the Jaguars took a player other than Lawrence with the first pick.

In this mock draft, the New York Jets decide that Sam Darnold is not the player they want to commit to as the future of their franchise. Therefore, despite discussions that Fields is falling down draft boards, the Jets take him second overall. Also, drafting Justin Fields would likely indicate that the Jets would be looking to trade Darnold before the 2021 NFL season.

The Dolphins invested heavily in the offensive line last offseason, but the opportunity to add another talented offensive lineman is too much to pass up.

The Dolphins would have the luxury of putting Penei Sewell and Austin Jackson at the two tackle positions. That would allow the Dolphins to kick Robert Hunt inside to guard. During the 2021 NFL Draft process, Hunt was discussed as a potential long-term option at guard in the NFL.

The Atlanta Falcons lost Austin Hooper in free agency and traded for Hayden Hurst last offseason. The upcoming season will be Hurst’s final year in Atlanta unless the team decides to extend him. Subsequently, the Falcons may look for their future tight end in this draft.

Kyle Pitts is viewed by many as a top-10 selection in the 2021 NFL Draft. Adding him to an offense containing Hurst, Julio Jones, and Calvin Ridley would give the Falcons one of the most dangerous pass-catching groups in the entire NFL.

The Bengals need to focus on their offensive line in this draft. However, there is no clear second top-five option on the offensive line with Sewell off the board. Therefore, the Bengals add to their impressive defense from 2021 with Kwity Paye out of Michigan.

After trading Carson Wentz to the Indianapolis Colts, the Eagles are potentially in the market for a quarterback.

The way this 2021 NFL First Round Mock Draft falls, the Eagles can remain at No. 6 and pick up the QB many see as the second-best in the draft in Zach Wilson. Wilson can come straight in and compete with Jalen Hurts in the weeks before and during the 2021 NFL season.

The Lions are currently set to lose all three of their top wide receivers from 2020. Therefore, they need to look to replace at least one in the upcoming offseason. Getting Jaylen Waddle with the seventh selection would give the Lions an immediate playmaker to utilize in the 2021 season.

The Carolina Panthers are searching for their next franchise quarterback. They have Teddy Bridgewater under contract for two more seasons. Thus, they can afford to take a chance on a player like Trey Lance. Lance may need a season or two to develop in the NFL, and this is the perfect situation for that to happen.

The Cowboys need to address their cornerback position in this draft. Their secondary was a clear weakness last season, so adding the top cornerback available would be an ideal situation. Caleb Farley would have the opportunity to become an instant starter alongside Trevon Diggs in 2021.

One of Washington’s priorities this offseason is to add another weapon opposite Terry McLaurin. Putting DeVonta Smith in the Washington offense with McLaurin would give Washington an impressive receiving group, not to mention Antonio Gibson’s third-down abilities as a complement to that.

The secondary has often been pointed to as the 49ers’ Achilles heel over the past two seasons. The selection of Patrick Surtain II in this 2021 NFL First Round Mock Draft makes a lot of sense, given Richard Sherman’s status as a free agent this offseason. Surtain would likely have the opportunity to start early in the 2021 season for the 49ers.

The Colts need a left tackle to replace Anthony Castonzo, who retired this offseason. To get their guy, they give up picks 21 and 54 to move up eight spots.

Rashawn Slater is a player who divides opinions, with some having him close to Sewell and others seeing him as a potential second-round prospect. However, he would get the chance to come in and play with an excellent offensive line in Indianapolis.

The Vikings need to make several upgrades to their defense. They are set to start two second-year corners in Jeff Gladney and Cameron Dantzler in the 2021 NFL season. Adding Jaycee Horn would give the Vikings a set of three young cornerbacks who could be a foundation of their defense over the coming years.

The Patriots love to build their defense around versatile, talented linebackers, and in this 2021 NFL First Round Mock Draft, they get their heir apparent to the position. Micah Parsons would be the ideal candidate to continue the New England tradition of strong, impressive off-ball linebackers.

With Kenyan Drake set to depart the Cardinals this offseason, adding a running back in the 2021 NFL Draft is an intriguing option. Therefore, getting a player of Najee Harris‘ quality would give the Cardinals a potent backfield to aid Kyler Murray. Stopping those two talented runners would be tough for opposing defenses.