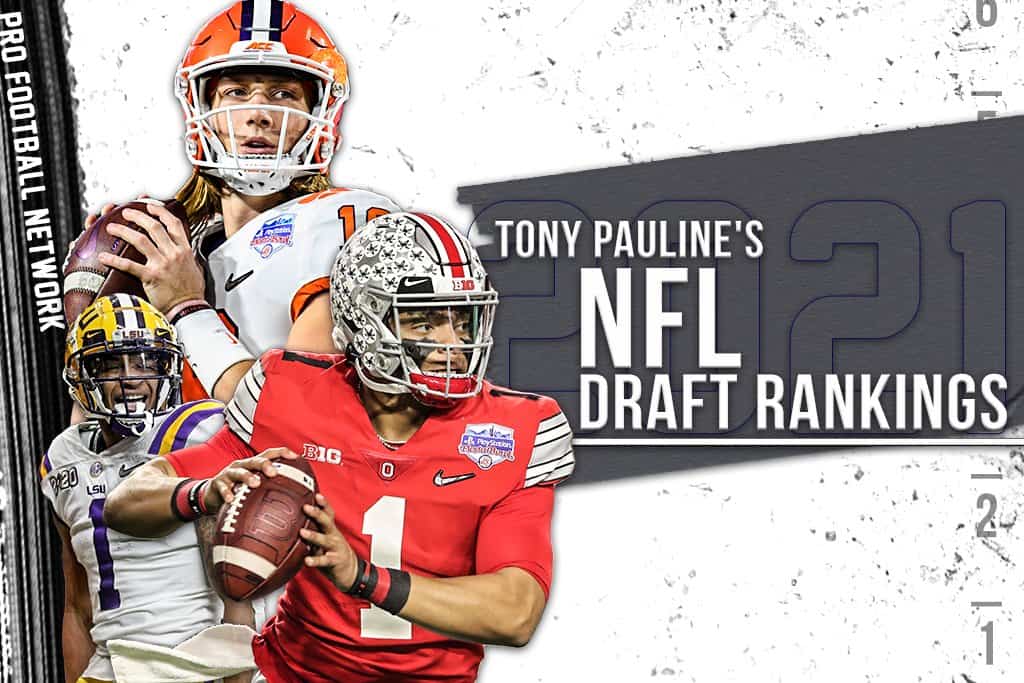 The NFL Draft is finally here! Teams around the league have finalized their player rankings and assembled their draft boards. Meanwhile, my final draft board has 873 graded 2021 NFL Draft prospects.

NFL Draft Prospects 2021 | How the board shakes out

My final 2021 NFL Draft board presently breaks down as follows:

Almost from the beginning, Trevor Lawrence was anointed as a franchise quarterback in the NFL and a player who would eventually be the first pick of the draft. And after breaking down the film, there’s no reason to doubt any of that.

Lawrence possesses all the skills to carry a team in the NFL — physical, mental, and intangible. He does an incredible job leading the offense, possesses the ability to make all the throws, and consistently makes proper choices. Lawrence is a big-bodied pocket passer, but he possesses the foot speed to pick up big yardage with his legs.

Ja’Marr Chase is a dominant game-controlling receiver who projects well to the NFL. He’s smooth and fluid, quickly releases into pass routes, and immediately gets to top speed. Chase also possesses a burst of speed that helps him separate from opponents.

Chase is a gifted athlete and natural receiver who dominated at the college level and should easily adapt to the NFL. He projects as a number one wideout at the next level and is a terrific 2021 NFL Draft prospect with incredible upside.

From the onset of his career, Penei Sewell was projected as a potential early draft pick at the all-important left tackle position. Sewell possesses the footwork, agility, and movement skills to hold down the position at the next level. He also projects well in a zone-blocking scheme. He must improve his strength at the point and develop a nasty attitude, but Sewell comes with tons of upside.

Kyle Pitts is an amazingly athletic pass catcher who’s a receiver in a tight end’s body. He’s agile, fluid, and a natural pass catcher. Pitts was a dominant tight end who took over games at the college level. And he usually did so against the opponent’s top cornerback. He has tremendous upside.

If there’s a faster-rising prospect in the nation than Zach Wilson, I’m not aware of him. Except for the fact he’s short, Wilson checks all the boxes you want in a quarterback at the next level. He is smart, tough, athletic, and has the arm strength necessary to make all the throws.

Patrick Surtain was a terrific cornerback for Alabama the past three seasons. He comes with the size, play speed, and ball skills to start in the NFL. Though lacking polished ball skills, his physical skills and bloodlines lend me to believe Surtain will develop into an outstanding NFL cornerback in the near future.

DeVonta Smith was incredibly productive for Alabama and is a complete receiver with a polished game for the next level. The lack of size will scare some teams off, and Smith is a scheme-specific wideout. If properly used in the slot or off the line of scrimmage, I believe Smith will be very productive at the next level.

Micah Parsons is a tremendous athlete who forces turnovers with big hits and explosiveness. He offers the ability to develop into a three-down defender, but he must polish his instincts and be quicker diagnosing plays rather than relying on sheer athleticism to get to the action. He’s a scheme-versatile linebacker, though I prefer him as a traditional weakside 4-3 outside ‘backer.

From the point of view of physical skills, Justin Fields grades as highly as any quarterback in this draft and has the strongest arm of any of the top quarterbacks. He also struggles with his reads and is slow to process what’s happening on the field, which is a red flag. Fields absolutely has starting potential at the next level and could lead a franchise, but he will need the right coach who is able to match the mental skills with his physical ability.

Jaycee Horn is a large, athletic defensive back who plays aggressive football. He displayed tremendous development in his game last season and has all the necessary tools to develop into a No. 1 cornerback on Sundays. Horn comes with huge upside, and in time, he should develop into one of the better defenders to come from the crop of 2021 NFL Draft prospects.

You can sort my 2021 NFL Draft prospect rankings below by team or by position. You can also utilize the search function to quickly find whatever you may be looking for.

Mobile users: Please note that the rankings are best viewed in landscape mode.

Be sure to give PFN’s free 2021 NFL Mock Draft Simulator a spin, which now includes both sim-initiated trades and user-initiated trades. Take control of your team and build your perfect haul of 2021 NFL Draft prospects.