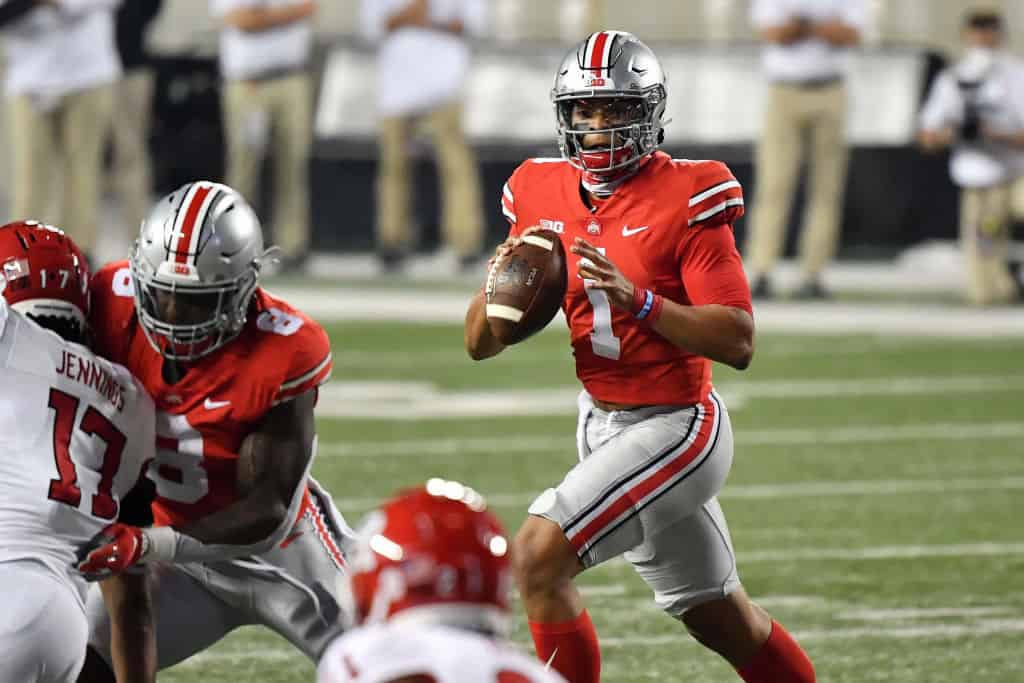 COLUMBUS, OH - NOVEMBER 7: Quarterback Justin Fields #1 of the Ohio State Buckeyes passes against the Rutgers Scarlet Knights at Ohio Stadium on November 7, 2020 in Columbus, Ohio. (Photo by Jamie Sabau/Getty Images)
What's in this article? Click to show
Is Justin Fields slipping down NFL Draft boards ahead of his pro day?
Tony Pauline’s information on Justin Fields’ NFL Draft stock
Are Justin Fields’ processing concerns legitimate?
Steve Verderosa mirrors recent sentiments in “Breaking Down the Board” debut
What does this mean for Fields ahead of his pro day?
Want more 2021 NFL Draft prospect news? Want to do your own mock draft?

Ohio State quarterback Justin Fields will continue to train ahead of his pro day, currently scheduled for March 30. In the meantime, the fluctuations of his 2021 NFL Draft stock are out of his control. Recent reports suggest that Fields’ stock might be slipping in the eyes of NFL evaluators.

Is Justin Fields slipping down NFL Draft boards ahead of his pro day?

No matter what, Justin Fields will be a first-round quarterback in the 2021 NFL Draft. He was one of the top quarterbacks in the class heading into the 2020 season. In the ensuing campaign, he largely solidified that status.

Although Fields had a few less-than-stellar performances in Big Ten play, particularly against Indiana and Northwestern in the Big Ten Championship, he reclaimed control with a terrific showing in the College Football Playoff.

An injury limited his ability to play up to his potential in the Buckeyes’ title loss against Mac Jones and the Alabama Crimson Tide. But in the first round, against Clemson Tigers quarterback Trevor Lawrence, Fields single-handedly willed his team to victory.

Fields’ talent remains apparent. At his best, he was viewed as a QB1 challenger. Nevertheless, beyond Fields’ raw abilities, there are other factors to consider. And according to Pro Football Network NFL Chief Draft Analyst Tony Pauline, he is hearing that Fields’ draft stock is dropping on some boards.

According to Pauline, there are concerns in the NFL community revolving around Fields’ ability to consistently scan the field and go through his progressions.

Those numbers are staggering in a vacuum, and they allude to a more daunting possibility. What if Fields doesn’t quite have the consistency, from a processing standpoint, to live up to his astronomical draft billing?

In his comments, Pauline went on to address some of the contextual cues in the discussion but reiterated Fields has been dropping down some boards because of this issue.

“I, at the time, said that we don’t know if it was a fact that the 200+ times his primary target was open and there was only seven times he really had to look away from his primary target. However, there are some people out there that are telling me Justin Fields has fallen down their boards, because while they think while he is a great physical specimen and he’s got tremendous arm strength, and is a great arm talent, they think that there is a concern there about staring down a primary target and not being able to process things that quickly. I don’t know that I completely agree with that, but that is the word from some teams out there.”

There are some inconsistencies with Fields’ processing, and the concerns surrounding his relative lack of volume with processing bear weight.

However, it’s also important to note that Ohio State’s offensive system heavily employs WR option routes — that is, wide receivers often decide where to break at the top of their route stems. Fields was forced to wait to throw the ball in these situations until his primary receiver made their decision. That may have contributed to the delay and lack of full-field awareness on some snaps.

Yet, even with that in mind, it is a legitimate concern that Fields will have to adjust from that WR option offense and learn to scan the field more efficiently at the next level. In spurts, he showed that he has the capacity to scan the field. However, consistency is necessary, especially at the NFL level, where windows open and close faster.

On top of this, Fields’ processing also shows up at times under pressure. The Ohio State quarterback can make suspect decisions under duress. If he can’t process quickly enough in the NFL, he’ll enter those situations more frequently.

Steve Verderosa mirrors recent sentiments in “Breaking Down the Board” debut

Verderosa referenced Fields’ inability to beat out Jake Fromm at Georgia, as well as Fields’ tendency to hold onto the ball and avoid anticipatory throwing. Ultimately, Verderosa declared he did not have Fields graded as a first-round quarterback in the 2021 NFL Draft.

Verderosa did acknowledge that watching tape is only a small part of the scouting process. Scouting also involves gauging a player’s leadership ability by canvassing coaches and teammates. It also involves getting a read on a given prospect’s practice habits and training regimen.

Verderosa acknowledged that his process has only included tape up to this point. However, he reiterated that he would not draft Fields in the first round off of the tape.

A silver lining in Fields’ low grade from Verderosa

Although he graded Fields harshly, Verderosa also acknowledged the projective element of draft evaluation — that is, players are drafted for what they can be, not what they currently are. Verderosa used Josh Allen as an example of a talented quarterback who wasn’t refined enough at first. Yet, he improved and eventually lived up to his draft billing.

“Always talk about what they can do first, because the negative stuff will stick in people’s memory banks a lot more than what a guy can do. Justin Fields is a risk/reward player. If this guy is able to figure it out, go to the right place with the right coaches, he could really flourish. The big talk about Josh Allen up in Buffalo was, ‘he’s not accurate’… but guess what? He got some really good coaching and he played great this year. Players get better. For Justin Fields, I hope it happens.”

Verderosa’s final quote is important because it strikes at the heart of draft evaluation. Fields may not receive a raw first-round grade from Verderosa, but his round grade doesn’t doom him to a second-round career in the NFL.

Fields can improve, and his physical traits give him a rare foundation to build upon. Additionally, quarterbacks with Fields’ raw talent tend to go earlier than their raw grades suggest because they possess that developmental upside, while other passers don’t.

What does this mean for Fields ahead of his pro day?

Applying these findings to additional context, a drop out of the first round is still not warranted for Justin Fields. He’s still a top-notch physical talent at quarterback, a solid leader, and with an NFL coaching staff, he could make the necessary schematic transitions.

However, in a 2021 quarterback class that’s strong at the top, there isn’t much room for error.

Trevor Lawrence is an immaculate prospect who recently showed out for the Jacksonville Jaguars and other NFL teams at his pro day on February 12. Zach Wilson is surging, and reports claim that at least one team has Wilson as their QB1. And even beyond that, North Dakota State quarterback Trey Lance is also an exciting talent and could challenge Fields if these concerns persist.

Fields won’t be able to go back and correct his errors on tape, but he will be able to connect with NFL teams and perform damage control at his pro day in late March. There, Fields can show off his talent as a thrower. He can also answer questions surrounding his projection in interviews. Fields might be slipping down draft boards, but a player of his caliber can only slip so far.