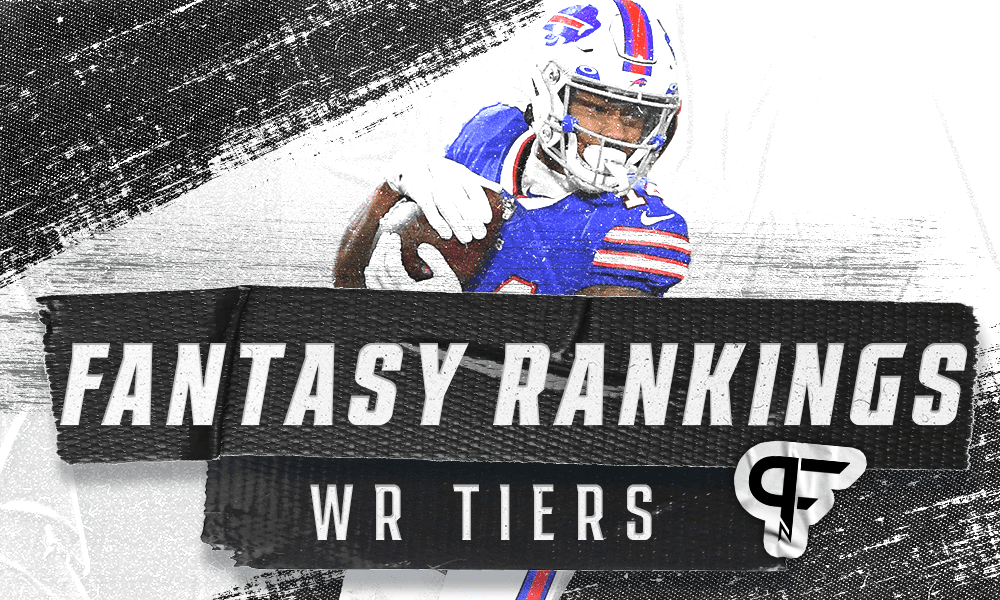 2021 Fantasy Football WR Tiers: Davante Adams and Tyreek Hill in a tier of their own

While we meticulously comb through and critique individual player rankings, approaching positions with a tier-based approach could be the better way to go for fantasy football when it comes to the actual draft. Using tiers in fantasy football for position groups like WRs, there could be substantial value to be found rather than only chasing the big names.

Why use WR tiers rather than rankings for fantasy football?

We would all love to live in a perfect world where we take our top-ranked player at every selection, but that’s just not realistic during the draft. Now in the draft, name recognition plays a massive role in how we perceive talent and upside. But odds are they are not the only player with a similar fantasy outlook.

If you knew four players were projected to all finish with identical fantasy seasons but were going nearly a round apart in ADP, you would always choose the latter player who is the better value. That is what tiered-based drafting is all about — looking for players at a value. In this case, we are looking at WRs and using tiers to find the better pick in fantasy football drafts at their given value.

Each position has a different point where there’s a considerable drop-off in talent and opportunity. Understanding which round that drop-off comes depends on scoring settings and the flow of each draft. Therefore, always remain fluid as your draft shifts from one position run to the next. For now, let’s take a look at my WR tiers for the 2021 fantasy football season.

Which wide receivers belong in the elite tier of fantasy football?

Davante Adams and Tyreek Hill are the only two players who I am willing to put in the top spot in rankings given the consistency and upside that we have seen. Now, this is assuming Aaron Rodgers is playing. I think we can all agree that Adams isn’t likely to record 18 touchdowns with Jordan Love.

Assuming Rodgers plays, they are the only two receivers I could justify taking inside the first round of fantasy drafts.

Tier 2 WRs are receivers who could be the WR1 in fantasy football.

Did you know that DeAndre Hopkins has seen 150+ targets in six straight seasons and has finished as a top-five receiver in five of them? I get the Cardinals added A.J. Green and Rondale Moore, but they will have minimal impact on Hopkins in 2021. Imagine if he found the end zone a few more times? You’d be looking at the WR1 in fantasy.

Tier 3 fantasy football WRs have some of the highest upside at the position.

A.J. Brown was looking like he could have set the record for targets in 2021. Then, the Titans went out and brought in Jones as any smart organization would do. While Brown might not see 180 targets, 120 is still well in range.

Even if he is not the WR1, that will not stop him from being a WR1. Brown proved his TD rate was no fluke. On just 106 targets in 2020, Brown was the WR12 with 1,075 yards and 11 touchdowns. Amongst receivers who saw at least 50 targets, Brown had the fourth-highest points per target at 2.3 and was seventh in points per reception at 3.48.

DK Metcalf ended as the WR7 with 271.3 PPR points and was a WR2 or better in 50% of his games last season. In just two years, Metcalf has 2,203 receiving yards and 17 touchdowns. Not bad for a guy who had a lousy three-cone.

What Justin Jefferson did was simply historic. He did what no other wide receiver in the game’s history had done by turning 125 or fewer targets into 1,400 yards. He did that as a rookie.

The question is, where can Jefferson go from here? I will not bet against him, but his 70.4% catch rate and 15.9 yards per reception scream career-bests. With that said, Jefferson deserves his spot in the upper tiers of fantasy football WRs for 2021.

WRs in Tier 4 are some of the best value in fantasy football drafts. Those who prioritize target hogs can look no further than Keenan Allen, Allen Robinson, Terry McLaurin, and Michael Thomas. Every player in this range has the opportunity to see 140 targets in 2021.

In fact, Robinson and Allen did that last season with 151 and 147, respectively. Although Allen recorded just 992 yards, I expect to see him used more than as just a chain mover (7.0 average depth of target) in 2021 with Anthony Lynn gone.

After playing with Nick Foles and Mitch Trubisky in 2020, Robinson will begin the season with Andy Dalton, but eventually, Justin Fields will be under center. The sooner this move happens, the higher Robinson’s ceiling could climb.

Despite playing with Dwayne Haskins, Alex Smith, Kyle Allen, and Taylor Heinicke the last two years, McLaurin has somehow recorded 2,037 yards and 11 touchdowns. For all the jokes, Ryan Fitzpatrick is a significant upgrade and has no issue taking risks, letting players like McLaurin win for him. I don’t think top six is in the range of outcomes, but McLaurin should be no worse than a WR1 in 2021.

Please do not forget about Thomas on draft day. I feel there is this massive misconception that Thomas cannot succeed with Taysom Hill under center. But the truth is Thomas was the WR15 (16.1 PPR) while averaging 9.3 targets, 7.5 receptions, and 85.8 yards. He saw over 30% of the targets during this stretch. And we consider Hill to be the lesser of the options between him and Jameis Winston.

Regardless of who is under center, Thomas will be the focal point of the passing game. Emmanuel Sanders and Jared Cook are on other teams, and he has no competition for touches outside of Alvin Kamara. Thomas is one of the best players in the NFL and can be a 100-reception and 1,200-yard receiver with whoever the Saints decide to place at the helm.

I love every one of the wide receivers in this tier for fantasy football. Each brings a level of consistency and value. The biggest thing they have in common is the uncertainty of whether or not they are even the WR1 on their own team.

While never the hot, trendy name, Robert Woods has been as consistent as it gets despite sharing the field with Cooper Kupp. Over the last three seasons, Woods has finished as the WR11, WR14, and WR14 in PPR formats. Now, Woods gets an upgrade under center from Jared Goff to Matthew Stafford. He is being undervalued yet again in drafts but has weekly high-end WR2 upside.

I love D.J. Moore. Anyone who knows me knows this. In three years, Moore compiled 208 receptions, 3,156 yards, and 10 total touchdowns. He became fifth all-time in total receiving yards before turning 24.

Last season, there were only three WRs with 93+ yards in eight or more games: Ridley, Diggs, and D.J. freaking Moore. Oh, and he did that with Cam Newton, Kyle Allen, Taylor Heinicke, Will Grier, and Teddy Bridgewater throwing him the ball.

The two concerns are a) can he steal targets from Robby Anderson and b) can Joe Brady and Matt Rhule “fix” Sam Darnold?

Amongst Tier 5 WRs are Dallas Cowboys receivers Amari Cooper and CeeDee Lamb. On any given week, both Lamb or Cooper could blow up. On any other team, they would be the dominant alpha. But together, they cut into each other’s ceilings. The most significant boost to both Cooper and Lamb is the return of Dak Prescott. In their five games together, Cooper was the WR8 (17.8 ppg), and Lamb was the WR11 (17.1 ppg).

Both Tampa Bay WRs find themselves a part of the same tier as well for fantasy football as both Mike Evans and Chris Godwin present intriguing questions.

You are not going to find a more consistent WR than Evans. All he has done since entering the NFL seven years ago is surpass 1,000 yards every year and scored 8 or more TDs in five seasons. Evans has finished as a top-12 fantasy WR five times and never outside the top 24. But does he have the ceiling to outperform his ADP significantly and even jump into the next tier of fantasy football WRs?

Then there is Godwin. After a breakout season in 2019, Godwin saw his season derailed by both injuries and the addition of Antonio Brown, who is back for the 2021 campaign as well. Godwin had at least 6 targets in 10 of 12 games last year and should be projected in a similar scenario in 2021. The issue is that he failed to go over 100 yards until Week 17 and lacks week-winning upside without an injury to Evans or Brown.