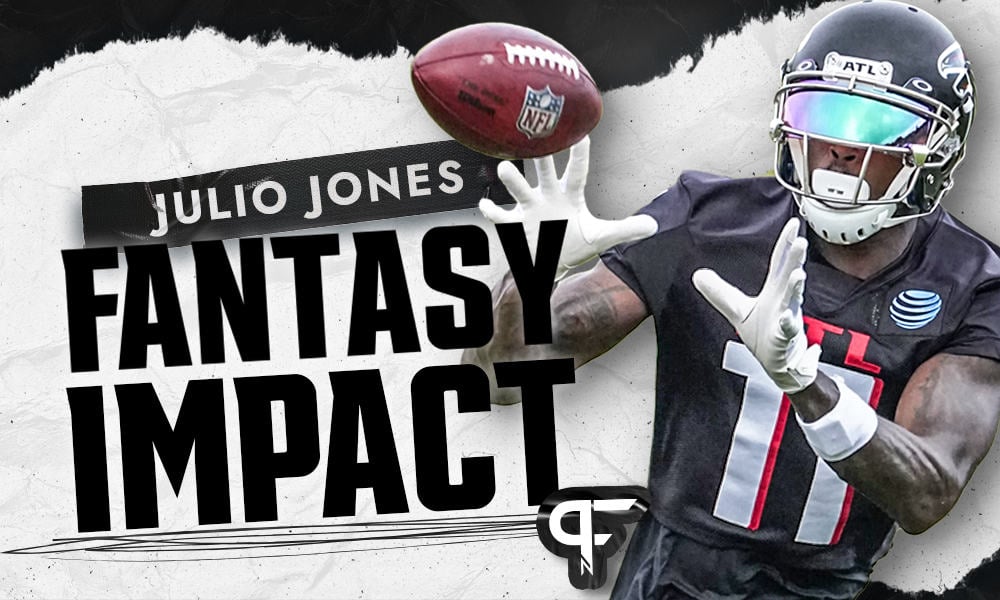 By Tommy Garrett
June 6, 2021
What's in this article? Click to show
Julio Jones has been traded to the Tennessee Titans
How the Jones trade impact the fantasy value of Calvin Ridley, Kyle Pitts, and Russell Gage?
Want more fantasy football analysis and news?

After what was a relatively calm few weeks since the draft, the content machine that is the NFL kicked into full gear as it appears Julio Jones has played his final snap for the Atlanta Falcons. While the focus has been applied to where Jones would end up, what about the players he leaves behind and the potential fantasy football ramifications? With Jones having been traded, how does this impact the fantasy outlook for Falcons’ pass-catchers Calvin Ridley, Kyle Pitts, and Russell Gage in 2021?

Julio Jones has been traded to the Tennessee Titans

Before we dive into the fantasy impact this could have on Ridley, Pitts, and Gage, let’s look at how we got to this moment. For those who tuned out after the NFL Draft, this might seem like it came out of nowhere. To a certain extent, it has, but it reached its crescendo on Monday [May 24] after a phone call while on FS1’s show “Shannon and Skip: Undisputed.”

On live TV, Shannon Sharpe called Jones on the phone and asked him, rather bluntly, if he wanted to stay in Atlanta. Jones quickly responded, “No, I’m outta there.” We can get into whether or not Jones knew he was on the air. Regardless, we got what appears to be an honest answer and one that corroborated reports.

According to a source, NFL Network’s Insider Ian Rapoport also stated that Jones requested a trade “a few months ago.” The team then agreed they would listen to offers. ESPN’s Adam Schefter also reported Atlanta was asking for a first-round pick in exchange for the perennial Pro Bowl receiver. They ultimately got a second-round pick in return for the former Alabama receiver.

Few WRs can match the consistency of Jones in fantasy football

It’s hard to overstate how incredible and consistent Jones has been throughout his illustrious career with the Falcons. His stats continuously jump off the page. Even at 32, he remains one of the all-time greats and can take over any game. In 135 regular-season contests, Jones racked up 848 receptions for 12,896 yards and 60 touchdowns. Jones’ 95.5 yards per game is the highest average in NFL history (minimum 100 games).

From a fantasy perspective, Jones has been nothing short of phenomenal. Since his rookie season in 2011, Jones’ average finish in PPR scoring is WR17.5, scoring 310.94 points per season and 18.66 points per game. Furthermore, this includes his injury-shortened 2020 and 2013 campaigns (in 2013, he played just five games). If we remove those from the equation, Jones was the WR7.5 over those remaining eight seasons, producing 356.7 PPR points (18.56 ppg).

Even in what we consider a “down year,” Jones posted some of the best numbers of his career. His 15.1 yards per catch was his highest since 2017, and his catch percentage of 75% was the best of his career.

Jones is as elite as they come, and it’s hard to overstate the impact his departure would have on the Falcons’ offense. With that being said, few teams in the NFL have the talent that the Falcons do. From a fantasy standpoint, Ridley, Pitts, and Gage could all elevate their game and increase in value now that Jones is headed to a new roster.

How the Jones trade impact the fantasy value of Calvin Ridley, Kyle Pitts, and Russell Gage?

If Jones is dealt, what would that mean for the remaining weapons in Atlanta?

With Jones, Calvin Ridley is a WR1. Without him…he is still a WR1 for fantasy

Since his selection in 2018, Ridley has been exceptional. Where a generational talent would overshadow most receivers, Ridley has the talent to carve his own path. Yet, I don’t know if he receives the respect he deserves despite his WR22, WR27, and WR5 respective finishes to start his career.

Ridley has shown time and time again that he is more than capable of leading the Falcons’ offense. For fantasy, Ridley is a WR1 with or without Jones. With Jones now in Tennessee, Ridley deserves top-five consideration in fantasy drafts.

Pitts is primed to break every rookie TE record for fantasy

By now, you are likely sick and tired of every draft and fantasy analyst singing the praises of Kyle Pitts. But I am here to tell you he deserves it and then some. He is an outlier in every sense of the word.

It came as no surprise to see Pitts break the record as the highest-drafted tight end in NFL Draft history. There is a strong case to be made that he is the second-best receiver in this class. But luckily for us, he plays a position devoid of week-winning talent outside of a select few names.

If you have played fantasy for any length of time, you are well aware that rookie tight ends never deliver. Since 2010, only Rob Gronkowski and Evan Engram have finished as TE1s (top 12) as rookies. But Pitts is not a traditional tight end. He is more of a massive slot receiver who carries TE designation.

With Jones in the lineup, Pitts was looking in the range of 90 targets. Should a Jones trade take place, we might be looking closer to the 115-120 range. For reference, only Travis Kelce and Darren Waller surpassed this total in 2020 (145 each).

Tight ends will be a massive focal point of Arthur Smith’s offense. Last season, they accounted for 29.6% of Tennessee’s targets which was fourth-most in the NFL.

Pitts was already going to be a producer from Day 1. Now, he has the chance to set the world on fire. I would not be surprised if he finishes as a top-five TE and shatters every record along the way. I don’t know what the odds are for Pitts as the Offensive Rookie of the Year, but I am about to put my money where my mouth is.

Pitts and Ridley should dominate in fantasy now that Jones is out of the picture.

Gage is a very sneaky fantasy WR should Jones get traded

Everyone has “my guys” in fantasy. Those who you believe in and try to get on every roster. Last season, Gage was one of “my guys.” I was touting him when I made my projections last May. There was an opening in the high-volume passing attack of the Falcons, and Gage went on to put up career-high totals in 2020.

Playing in 16 games (eight starts), Gage corralled 72 of his 109 targets for 786 yards and 4 touchdowns, setting career-highs across the board. He even added 1 score through the air as a passer and could have thrown a second passing touchdown if it were not for a drop. Gage blew away his WR89 (304 overall) ADP and ended the season as the WR37 in PPR leagues with 181.1 points (11.3 ppg).

Even in games where Jones was available, Gage saw virtually no change in production. In the nine contests together, Gage averaged 10.93 PPR points compared to 11.01 in the seven games without him.

During the offseason, the Falcons did not bring in any competition for touches at WR, which secures Gage’s role on the offense now that Jones is out the door. Gage will operate on the perimeter opposite Ridley, with Pitts roaming the slot. He could be in the range of 18% of the targets in 2021.

Gage has seen little change to his 2020 ADP in current drafts and is coming off the boards at WR77. On the contrary, I would expect this to change if Jones leaves. However, I doubt we see Gage reach a range I would consider beyond his potential value. He is one of the best values at receiver and one I will continue to stash in every draft.

D/ST Rankings and Streamers Week 7: Trust the Patriots in a divisional bout