Matthew Stafford upgrade over Jared Goff in L.A. is bigger than people realize

By Lucas Ellinas
June 8, 2021
Facebook
Twitter
ReddIt
Linkedin
Email
Jump around this article Click to show
Matthew Stafford has a clear edge over Jared Goff in terms of traditional statistics
The difference between Stafford and Goff is even more apparent when looking at their advanced metrics
Stafford’s arrival makes the Rams a playoff threat
Want more NFL news and analysis?

The Los Angeles Rams made headlines in the NFL offseason when they sent Jared Goff and several draft picks to the Detroit Lions in exchange for Detroit’s longtime starting quarterback Matthew Stafford. Most view this move as a simple upgrade for Los Angeles, but the advanced metrics suggest that they might be underestimating just how true that really is.

It only takes a quick look at the two quarterbacks’ box score statistics to see that Stafford is an upgrade for the Rams over Goff.

Goff had arguably his worst full season in the NFL, throwing for 3,952 yards, 20 touchdowns, and 13 interceptions. Excluding his rookie year in which he played in only seven games, those 20 touchdowns were a career-low.

Stafford, meanwhile, had a resurgence after suffering an injury in 2019 that caused him to miss half the season. He bested Goff in every category, totaling 4,084 yards, 26 touchdowns, and 10 interceptions. Notably, Stafford earned those statistics despite playing on a much worse team than Goff did. The Rams managed a 9-6 record and even won a playoff game despite Goff’s mediocre play.

The Lions, on the other hand, failed to capitalize on Stafford’s solid season, finishing the year at 5-11. It certainly appears as though both teams achieved their respective records in spite of their quarterbacks’ efforts, not because of them.

Stafford and Goff’s differences may seem obvious enough when looking at their box scores, but the gap between them is more significant than you might think.

To illustrate this point, let’s turn to the Offensive Value Metric (OVM). The OVM is a grading system created by the (Bx) Movement to evaluate players based on how much influence they had on their respective offenses, rather than purely on their box score statistics.

Last season, the two quarterbacks were on opposite ends of the OVM spectrum. Stafford’s grade of 26.24 ranked 10th in the NFL among all qualifying quarterbacks. Goff, on the other hand, earned a grade of 19.74, the sixth-lowest amongst quarterbacks.

As such, not only was Stafford more statistically successful last season, he also contributed vastly more to his offense than Goff did to his.

Examining the advanced metrics behind the two quarterback’s OVM grades

In order to explain the gulf between Stafford and Goff’s OVM grades, we need to look at the advanced metrics involved in calculating a quarterback’s grade. In the chart below, you can see how each of them performed on the most important of those statistics, along with how they ranked relative to the other quarterbacks who played enough snaps to qualify.

As you can see, while Stafford’s completion statistics are subpar, he consistently pushed the ball deep downfield. Meanwhile, with the exception of his completion percentage, Goff struggled in every area. Even there, he failed to crack the top 10 in any metric — something Stafford did twice.

From this, we can say that while they had rather similar completion statistics, Stafford attempted far more difficult passes than Goff did. In fact, his passes were more difficult than most in the league for that matter.

For a further examination of the two players, let’s look at how they performed on a week-to-week basis. The charts below show the two quarterbacks’ weekly grades, marked by the black dots. For comparison, the league-average grade for quarterbacks in 2020 is marked by the yellow lines. 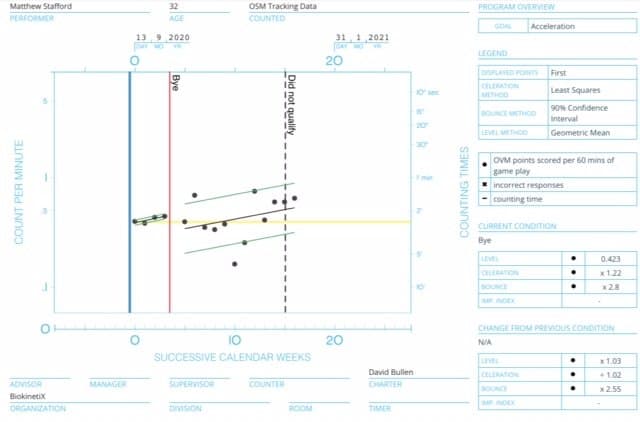 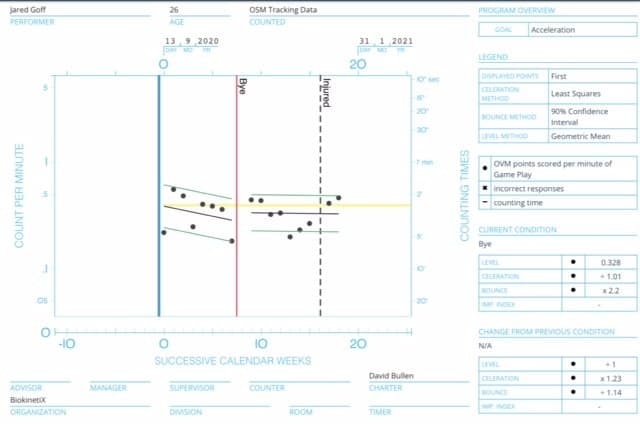 While both players had their inconsistencies, the data shows that Stafford was the better player overall. This despite him earning the lowest grade between the two players at 9.67. Fortunately, that game appears to have been an outlier, as only three of Stafford’s grades last season were below 20. Contrarily, he had two grades above 40, both of which ranked inside the top 20 grades earned by all quarterbacks last season.

On the other hand, while Goff’s worst grade (10.8) was slightly higher than Stafford’s, more than half of his grades were below 20. His high of 33.01 was far lower than Stafford’s as well, and it didn’t even crack the top 100 quarterback grades from 2020. Taking their entire seasons as a whole, it’s clear that Stafford was the more impactful of the two quarterbacks.

Clearly, Stafford represents a significant upgrade for a team that won a playoff game despite Goff’s struggles. It’s a beneficial arrangement for both parties. The Rams have a solid team, and with Stafford at the helm, they can be legitimate playoff competitors for the first time since the team fell apart in Super Bowl LIII.

Meanwhile, Stafford has the chance to prove that he can actually lead a team to significant success. During his 12 seasons with the Lions, he only made the playoffs three times and failed to earn a win during any of those attempts. Stafford can finally show that the Lions’ woes during his time in Detroit were indicative of flaws with the organization, and not with him.

Keep Reading! How Jameis Winston will impact the Saints’ offense as the starter in 2021