By Lucas Ellinas
June 2, 2021
Facebook
Twitter
ReddIt
Linkedin
Email
Jump around this article Click to show
Justin Jefferson and Justin Herbert both had historically great rookie seasons
Jefferson’s advanced metrics blow Herbert’s out of the water
The NFL awards are historically biased against wide receivers
Despite not winning Offensive Rookie of the Year, Jefferson seems set to have a phenomenal career
Want more NFL news and analysis?

The 2020 NFL Offensive Rookie of the Year, Justin Herbert, had a phenomenal season. As a result, he received 41 of the 50 votes for the award. Nevertheless, one could argue that the player who earned the other nine votes, Minnesota Vikings wide receiver Justin Jefferson, had an equally excellent rookie NFL season. In fact, examining the advanced metrics reveals that the voters might have made the wrong choice.

Additionally, Herbert’s statistics ranked competitively when compared to other non-rookie quarterbacks last season. He was sixth in passing yards and 10th in passing touchdowns.

However, it wasn’t just Herbert who broke records last season. Jefferson totaled 1,400 receiving yards, the highest by a rookie since the AFL-NFL merger, and he ranked even better than Herbert did relative to his position, coming in at fourth in receiving yards across the NFL last season.

Clearly, while Herbert was excellent, Jefferson matched him in terms of his traditional statistics.

Jefferson’s advanced metrics blow Herbert’s out of the water

With both Jefferson and Herbert producing remarkable box score statistics in 2020, we need a different method for comparing them. As such, let’s turn to the Offensive Value Metric (OVM). The OVM is a grading system created by the (Bx) Movement to evaluate players based on how much they contributed to their respective offenses, rather than purely by their box score statistics.

Jefferson performed exceptionally well on this metric, earning the highest OVM grade of any rookie last season, at 33.2. He also ranked 27th out of 98 qualifying wide receivers, which isn’t bad for a rookie.

Herbert, meanwhile, received a much lower grade of 23.9. Quarterbacks tend to grade lower than wide receivers on average, but Herbert wasn’t even the highest-graded rookie at his position last season. That was Joe Burrow, with a grade of 28.69. Moreover, Herbert ranked worse than Jefferson relative to his position, at 24th out of 41 quarterbacks.

These grades indicate that Jefferson was a far more impactful player than Herbert was in 2020, both in a vacuum and when compared to other players at his position. Therefore, while both players had excellent box score statistics, Jefferson had more direct control over those statistics, which should have given him an edge in 2020’s Offensive Rookie of the Year voting.

Examining the advanced metrics behind Jefferson and Herbert’s grades

If we want to understand why Jefferson earned such a high OVM grade compared to Herbert, we need to examine the advanced metrics involved in calculating those grades.

Jefferson performed reasonably well across the board. His only below-average metric was his separation numbers, at 2.6 yards on average when targeted. Still, he caught an above-average 70.4% of his targets, and his yards after the catch numbers were excellent.

At 5.3 yards, his YAC average ranked above most other NFL pass catchers. But the truly impressive part was the differential between Jefferson’s actual average and what the NFL’s calculations suggest that it should have been. At 1.9 yards, it ranked fourth in the NFL.

Herbert, meanwhile, ranked outside the top 10 in every category measured by the OVM. Some of his statistics, however, were reasonably impressive. For example, he completed 66.6% of his passes, 1.5% higher than expected according to the NFL’s calculations. The actual percentage is well below-average, but the differential nearly cracked the top 10.

His best statistic, though, was his aggressiveness. Herbert threw 18% of his passes into tight windows, more than all but eleven other quarterbacks. Unlike Jefferson, however, Herbert did have one particularly terrible metric.

Throughout the season, he consistently threw passes that were significantly shorter than average. Across all of his attempts, Herbert’s passes traveled at an average of 7.5 yards through the air. On his completions, that number was 5.2 yards. Both of those statistics ranked just outside the bottom 10 for quarterbacks.

For a more in-depth comparison between Jefferson and Herbert’s performances last season, let’s look at the weekly grades for both players during their rookie seasons. In the charts below, you can see their grades from each week of the regular season marked by the black dots. For comparison, the NFL average grades for their respective positions from 2020 are represented by the yellow lines. 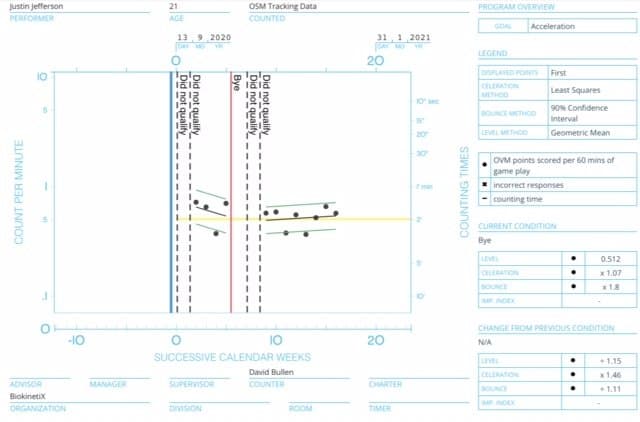 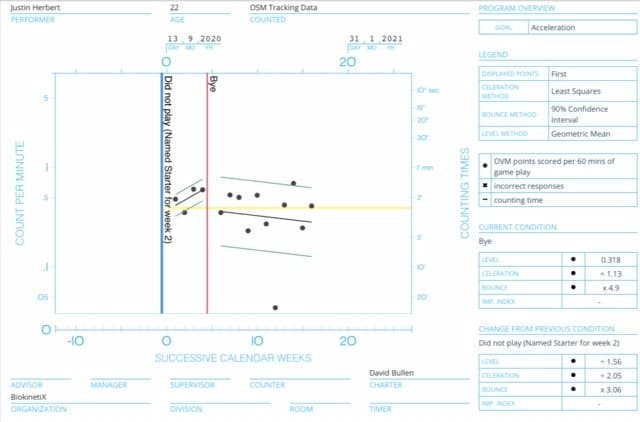 As you can see, while both players’ grades fluctuated somewhat, Jefferson was far more consistent. His grades hovered around the league average for most of the season, with an impressive high of 41.92. And while his low of 21.83 was significantly worse, it is far from a terrible grade.

Meanwhile, Herbert’s grades varied dramatically. His high of 41.28 nearly matches Jefferson’s, but his low of 2.33 was the 10th worst grade earned by a quarterback last season.

Obviously, some inconsistency is to be expected when examining a rookie’s statistics. It’s hardly fair to overly criticize Herbert for having one off week, even if his performance in that game was particularly terrible.

Nevertheless, when we are comparing two excellent seasons, those brief missteps can make a big difference. And in this case, Jefferson clearly has the edge.

The NFL awards are historically biased against wide receivers

Based purely on these statistics, it’s easy to make the argument that Jefferson should have been named Offensive Rookie of the Year in 2020 for his play with the Vikings. Yet, there is one factor we haven’t mentioned yet which worked in Herbert’s favor — the historical bias in NFL awards generally voting against wide receivers.

Most people know that the NFL MVP award is unofficially reserved for offensive players, and in recent years, almost exclusively for quarterbacks, with a running back breaking that trend just three times in the last 20 years.

What is less well-known is that wide receivers struggle on other awards as well. The AP Offensive Player of the Year award has only been won by a wide receiver three times since its inception in 1972. Two of those wins were by Jerry Rice, one of the greatest players ever to put on a jersey.

The Offensive Rookie of the Year award sees a similar disrespect for wide receivers, with only nine wins since 1957.

Those statistical anomalies exist even though the advanced metrics show that wide receivers consistently have a higher impact than both quarterbacks and running backs. The only position to regularly outperform wide receivers on the OVM is tight end. However, their lower box score statistics, with a few rare exceptions, means they likely aren’t going to contend for such awards anyway.

Wide receivers, on the other hand, have both the box scores and advanced metrics backing them but lack the appropriate accolades. Jefferson appears to be the latest in a long line of victims of this trend.

Despite not winning Offensive Rookie of the Year, Jefferson seems set to have a phenomenal career

I don’t mean to imply that anyone who voted for Herbert to win Offensive Rookie of the Year in 2020 can’t make a decent case for their decision. He had a great season. But so did Jefferson. And the advanced metrics suggest that he was the more impactful player.

That said, I can’t imagine the Vikings are too upset with Jefferson’s performance last season. If he continues on his current trend, Jefferson could be an all-time great player for the franchise. 2020 might well be the first of many phenomenal seasons for him. Hopefully, in the future, Jefferson gets the recognition he deserves.