By Lucas Ellinas
June 21, 2021
What's in this article? Click to show
Jameis Winston’s last season in Tampa Bay was truly unique
Despite his inconsistent play, Winston’s advanced metrics have always been excellent
The other candidate to be the Saints starting quarterback, Taysom Hill, was inconsistent in his limited time last season
Jameis Winston can be a star for the Saints with a little help
Want more NFL news and analysis?

New Orleans Saints quarterback Jameis Winston has been one of the NFL’s most fascinating players for several seasons now. Perhaps, not one of the best, but even the briefest look at his statistics is a fascinating experience.

Unfortunately, we were deprived of the roller coaster ride that is Winston last season, as he sat on the bench for most of Drew Brees’ final campaign. Now he is back with a chance to win a starting role following Brees’ retirement. And the data shows that, with a few minor adjustments, Winston can be a star in New Orleans.

Back in 2019, Winston had one of the most bizarre seasons in recent memory. He led the NFL with 5,109 passing yards and was second with 33 passing touchdowns while simultaneously throwing 30 interceptions, tied for the seventh-most in a season in NFL history.

I imagine it was frustrating for Buccaneers fans and the Tampa bay organization, but it was incredible to watch from an outside perspective. Interestingly, as bizarre as Winston’s statistics appear on the surface, the advanced metrics are arguably more riveting.

Despite his inconsistent play, Winston’s advanced metrics have always been excellent

It might be difficult to believe, but Winston has been one of the best quarterbacks according to multiple advanced metrics over the last five seasons. To illustrate this, let’s look at the Offensive Value Metric (OVM). The OVM is a grading system created by the (Bx) Movement to evaluate players based on how much they contributed to their offense.

Because Winston didn’t play in 2020, we need to look back at earlier seasons to examine his performance. And he has a history of excellence on the metric. The chart below shows his grades from 2016-2019 and where they ranked compared to other quarterbacks during those seasons.

It’s not an understatement to say that Winston was one of the most high-impact players at the quarterback position during those four seasons. As you can see, he was reasonably consistent as well, at least from season to season.

For a more in-depth examination of Winston’s OVM performances, let’s look at how he played on a week-to-week basis. In the charts below, you can see Winston’s weekly grades from 2019, marked by the black dots. For comparison, the average season-long grade for quarterbacks from that season is represented by the yellow line. 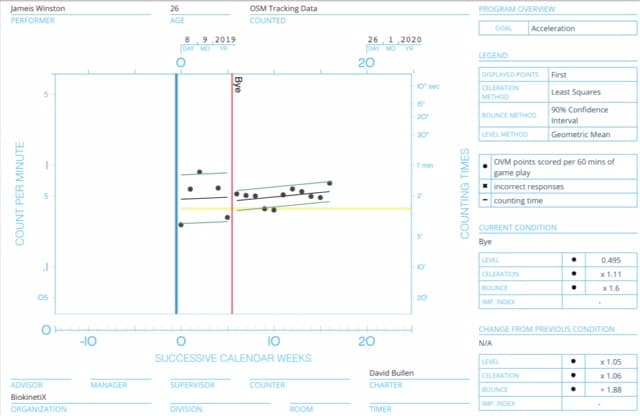 The vast majority of his grades were above the league average, often by a significant margin. His two worst outings were quite poor, coming in at below 20 points, but he also had nine grades above 40. One of those grades, a 51.2-point performance in Week 3, ranked as the fifth-highest in the entire season. Once again, we see a surprisingly consistent pattern from the notoriously volatile Winston.

Those who have watched Winston play might be skeptical regarding his apparent statistical success. Those 30 interceptions two seasons ago certainly don’t reflect particularly well on him.

To give some context, let’s look at the advanced metrics that go into calculating those grades. We’ll use 2018 as the example because it is the most obvious, but the pattern is essentially the same in the other seasons as well.

Historically, Winston’s worst metrics have been his completion statistics. In 2018, he completed a relatively low 64.6% of his pass attempts. To Winston’s credit, that number was 1.7% higher than expected, tied for tenth among all qualifying quarterbacks.

However, where he shined was on the other metrics. He ranked second in the NFL in both his average intended air yards (10.8) and completed air yards (8.4). Winston also threw into tight windows on 20.4% of his passes, the third-highest percentage.

Some statistics fluctuated in Winston’s other three seasons, resulting in slightly higher or lower overall grades. For example, in 2019, several of Winston’s advanced metrics fell somewhat, resulting in a lower grade. Still, most of them ranked well above the league average.

Clearly, Winston’s game has many positive aspects, even if his decision-making has often counteracted them.

The other candidate to be the Saints starting quarterback, Taysom Hill, was inconsistent in his limited time last season

Winston’s primary competition for the starting job in 2021 will be Taysom Hill, who has played the role of swiss army knife for the Saints in the last several years.

Hill started when quarterback Drew Brees went down with an injury in 2020, which indicates that he might have the New Orleans coaches’ trust in a way that Winston doesn’t.

Hill appeared in all 16 games in 2019, totaling 928 yards, 4 touchdowns, and 2 interceptions through the air. He also added 457 yards and 8 touchdowns on the ground and 98 yards and 1 score receiving.

Those are impressive statistics, but it remains to be seen whether Hill can actually fill the starting role or if he is better used as a specialist.

Hill’s OVM grades are limited but not particularly encouraging

Because of how the Saints have used Hill throughout his career, there is almost no OVM data we can use to evaluate his abilities as a passer properly. Nevertheless, we do have a few grades from last season. The chart below shows the four weeks in which he qualified.

As you can see, Hill was not particularly consistent. He didn’t have any genuinely exceptional grades, but his Week 11 performance was solid. Yet, he followed that up with one that was well below the average.

That doesn’t necessarily tell us that Hill won’t be more consistent if he started full-time. What we can say, though, is that his success as a full-time starter is far from guaranteed.

If Winston can fix some of the problems that have plagued him throughout his career, he should be able to win the starting job. And if he doesn’t, it might say more about him than it does about Hill.

Winston always had the potential to be an elite quarterback. He has the physical tools, and his advanced metrics are consistently impressive.

Unfortunately, his decision-making has often crippled his ability to succeed. Still, he is now in perhaps the perfect position to succeed. If anyone could reign in Winston’s more damaging tendencies, surely it would be Drew Brees and Sean Payton.

If they can, New Orleans has enough talent to be a contender immediately, even in an NFC South that contains the defending Super Bowl champions.

Keep Reading! What kind of impact can Albert Wilson have on the revamped Dolphins’ offense?

Dalvin Cook Injury Update: How long will Alexander Mattison be an RB1?

Christian McCaffrey Injury Update: Chuba Hubbard will lead the way for the rest of 2021

Will Saquon Barkley’s return mean anything against the Buccaneers?