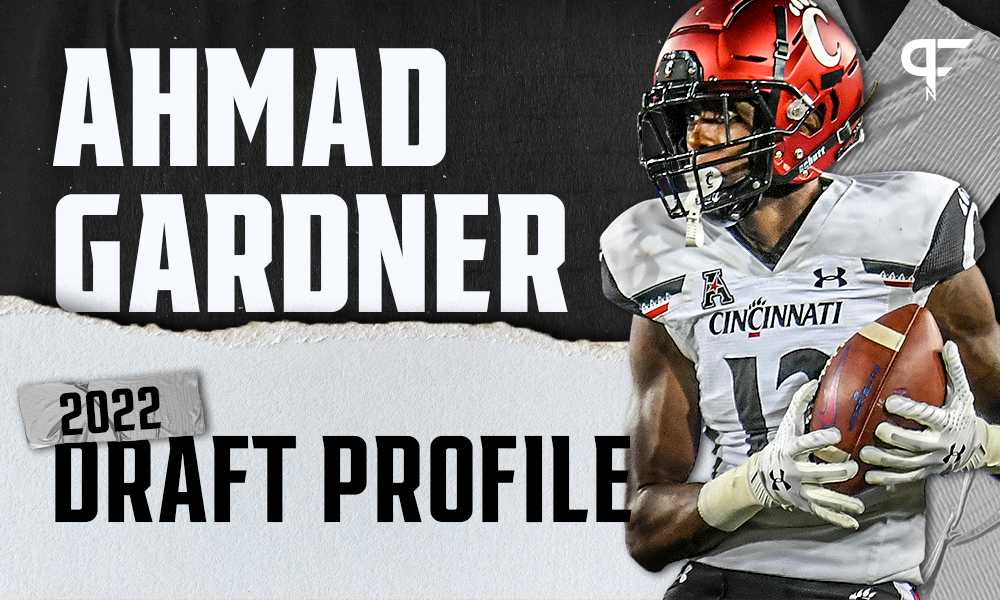 On paper, few cornerback classes will ever be stronger than the 2021 NFL Draft’s CB class. Five cornerbacks went in Round 1, and two — Jaycee Horn and Patrick Surtain II — went in the top 10. As impressive as 2021’s group was, 2022’s might be even better. Derek Stingley Jr., Kaiir Elam, and Sevyn Banks are just a few of the names that have received early praise. Another cornerback who deserves recognition is Cincinnati’s Ahmad Gardner. As you’ll see in Gardner’s NFL Draft scouting report, the Bearcats star might just have what it takes to challenge Stingley and Elam for the class crown.

We were spoiled with the 2021 NFL Draft’s CB class, but it doesn’t look like that process will end just yet. The 2022 cornerback class appears just as strong, and it might end up being even stronger. Whether it does depends on the progression of several high-upside prospects like Andrew Booth Jr. and Trent McDuffie.

Nevertheless, there are a few cornerbacks we can reasonably count on to remain in the conversation throughout the year. Derek Stingley Jr. has been one of the nation’s best coverage cornerbacks since his tremendous freshman campaign. Meanwhile, SEC counterpart Kaiir Elam has the traits to be at the top of the class. And then, in the AAC, there’s Cincinnati CB Ahmad “Sauce” Gardner. Gardner has quietly been one of the nation’s top producers, but what makes him such an exciting prospect?

With any cornerback, you have to start with their athletic makeup. With the wide receiver position so saturated with talent in today’s NFL, there’s a tangible baseline of athleticism that cornerbacks have to possess. If they fall below that baseline, it severely impacts their ability to cover NFL receivers.

Luckily for Gardner, he easily surpasses the baseline requirements for athleticism. He sports a long, lanky frame, standing around 6’2″, 188 pounds. He also owns exceptional length proportional to his height. For his size, Gardner is an excellent mover. He’s not quite the size/speed athlete that fellow 6’2″ cornerback Kaiir Elam is, but he still has plenty of movement freedom. The Bearcats star is fairly fluid flipping his hips and mirroring, and he has excellent explosiveness while changing direction.

Gardner’s explosiveness, in fact, is one of the more foundational parts of his game. The Cincinnati CB sports an insane burst coming back upfield, and he shows off abruptness in tackling situations. There’s an effervescent twitch in his movement as he’s always amped up. Gardner’s combination of length and closing burst makes him dangerous in multiple phases.

Gardner’s execution beyond his traits

Physically, Gardner is one of the more enticing talents in the 2022 NFL Draft. However, some of the most appealing parts of his game are mental rather than physical.

The Detroit, Michigan product plays with an infectious attitude, and he’s always incredibly alert and aware of his surroundings. He can change initiative at a moment’s notice, and he owns the wherewithal to position himself well against two-on-one opportunities for the offense. The Cincinnati CB is exceptionally quick to read and react to passes. His game-winning pick-six against ECU from 2019 is just one example of his natural instincts in action.

Elsewhere, Gardner’s profile holds strong. He’s fairly physical at the line of scrimmage, and he has the athleticism to recover if he fails to jam at the line. Gardner is proactive playing the ball at the catch point, and he has the length to consistently disrupt the catch process. He also possesses a great sense of timing, which enables him to convert with his physical traits.

Beyond his abilities in coverage, Gardner is a sound tackler. He has good tackling form overall, and he wraps up well in one-on-one situations. The Cincinnati CB is also an aggressive player when coming downhill. He attacks ball carriers stranded in the flats, and his explosive burst can be a death knell for receivers trying to rack up yards after the catch.

Gardner’s scouting report is stellar; the Cincinnati CB has been in many first-round mocks to this point, and that’s not by accident. Even so, his profile isn’t spotless.

While he’s an adept athlete, Gardner isn’t quite at the elite level of those above him. His long speed, while solid, is not top-tier. He could stand to sink his hips a bit more when changing directions to be more efficient. He’s more of a leggy mover than a sudden or fleet-footed cornerback, although, to his credit, he improved his footwork drastically from 2019 to 2020. That resulted in a corresponding improvement in movement freedom.

Additionally, Gardner can be overly aggressive at the line and delay his transition upfield. This can cause him to fall a step behind his opponents. He occasionally gives away optimal positioning down the field, and he can get caught up in congestion against overlapping route concepts. On top of the coverage qualms, Gardner can be more consistent dismantling blocks in run defense.

Despite his limited flaws, Gardner’s scouting report shows that he has the size, explosiveness, awareness, and competitive fire to be an alpha at the cornerback position. If he can keep refining his footwork and increasing his freedom of motion, he could reach unanticipated heights before the season’s end.

Gardner has always had a knack for making plays, and not just at cornerback. At Martin Luther King High School in Detroit, Michigan, he was an impact player at both wide receiver and cornerback. With his help, the Crusaders established themselves as the class of Division III football in the state before Gardner took his talents to the college stage.

Despite his multi-phase production in high school, Gardner was viewed as a mere three-star prospect in the 2018 recruiting class. At just 159 pounds, scouts considered him undersized for his 6’2″ frame. Still, he attracted several Division IA offers from schools like Indiana, Iowa State, Kentucky, and Syracuse. However, rather than playing in the Power Five, Gardner decided to head to the American Athletic Conference, where the Cincinnati Bearcats were rising.

Gardner’s career at Cincinnati and path to the NFL Draft

Upon Gardner’s arrival, the Bearcats were coming off an impressive 11-2 campaign in 2018. Not only had they cracked the season-ending Top 25, but they won their bowl game against Virginia Tech. Nobody would’ve questioned Gardner if he took a redshirt year or failed to produce as a true freshman on one of the country’s budding teams. But Gardner didn’t care, and he didn’t waste any time.

In both seasons, Gardner earned first-team All-AAC honors. Yet, even that’s not enough for the star defender. Gardner doesn’t just want to rule the conference. He wants to rule the nation. Gardner recently told Pro Football Network’s Cam Mellor that he had some lofty expectations for himself this season.

“My main expectation is to be the #1 shutdown corner in all of college football, which I think is easy to do.”

Cornerbacks like Elam and Stingley may have retorts for Gardner this coming season. But Gardner relishes the challenge and welcomes it with open arms. After all, he wouldn’t be a cornerback if he didn’t.

Want more 2022 prospect news? Want to do your own draft?