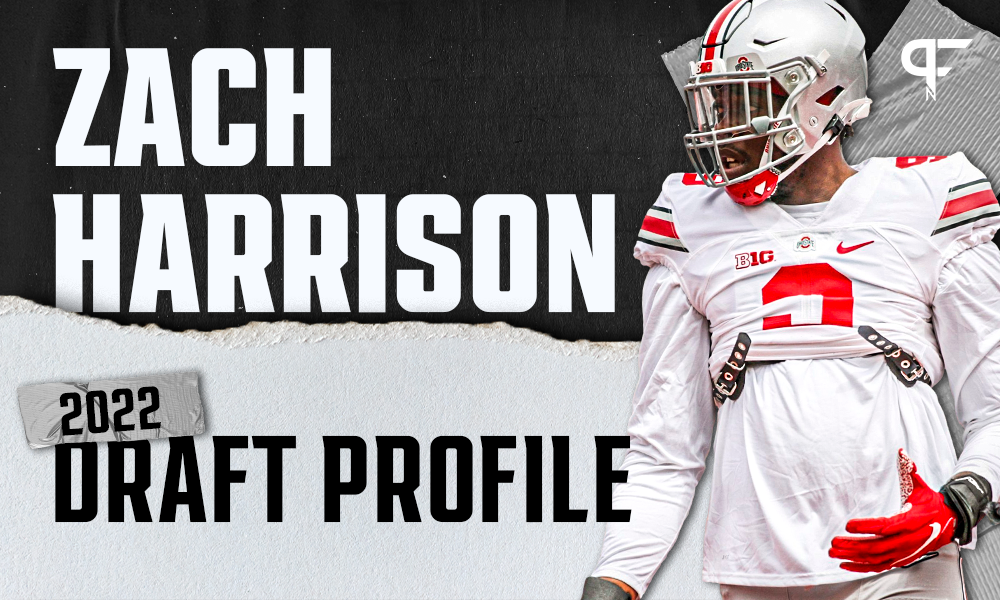 Wide receiver and cornerback are two of the most productive positions under the Ohio State banner. Still, one could argue that the Buckeyes have produced a comparable amount of NFL talent on the defensive line as well. Since the turn of the century, Buckeyes such as Ryan Pickett, Will Smith, Vernon Gholston, Cameron Heyward, Joey Bosa, Nick Bosa, and Chase Young have gone in Round 1. Dozens more have graced the later rounds. Can Ohio State DL Zach Harrison follow in their footsteps in the 2022 NFL Draft?

Ohio State has always been a factory for NFL talent, but especially in recent years, they’ve provided some of the most exciting prospects on the defensive line. Both Bosa brothers have paced their position in their respective draft classes. Meanwhile, Chase Young, taken second overall in 2020, is already trending toward star status and coming off a Defensive Rookie of the Year award.

For now, the Buckeyes don’t have a claim on the top spot in the 2021 defensive line class. That honor belongs to Kayvon Thibodeaux, with Drake Jackson of USC being a close second. However, there is a Buckeye who may have the potential to challenge for the lead in 2021. That player is DL Zach Harrison, whose scouting report promises plenty of upside.

Beyond having an elite name for a defensive lineman, Harrison undoubtedly passes the eye test for his scouting report. Standing at 6’6″, 268 pounds, Harrison is long and burly. With his size, he can rush outside to inside, and he also has some positional versatility. Ohio State mainly used him on the edge in 2020, but he has shaded inside on occasion, even to zero-technique at one point against Indiana.

While Harrison possesses some versatility, his best role might be at defensive end. There, his physical skill set meshes best. Harrison has excellent straight-line explosiveness, and he converts speed to power well. His stride lengths cover lots of ground, and he flashes acceleration around the edge. He’s reportedly been timed with a 4.47 40-yard dash, so it comes as no surprise that his explosiveness impresses.

On top of his straight-line explosiveness, Harrison plays with measured twitch. He can get linemen off-balance with lateral moves at the line, and he can explode off of those moves and challenge around the corner. Among other things, Harrison owns natural power to complement his athletic makeup. His length helps strengthen his leverage, and he also plays with decent natural balance.

As of now, Harrison is a relatively raw player. He has enticing physical traits, but it may take him another year to move toward his full potential. At this point, his pass-rush plan is not consistent or refined. Nevertheless, there are bright flashes, and if Harrison can put it together in 2021, he can be an exceptional player.

Harrison showcases rush moves and fast hands on occasion. One example was late in the Indiana game in 2020, where Harrison utilized a brutal cross-chop to get his blocker off-balance, then used his explosiveness to erupt around the edge. Once he can find more cohesion between his physical traits and operational approach, he could get to the quarterback with greater ease and consistency.

As referenced above, Harrison can stand to refine his pass-rush plan further ahead of the NFL Draft. Additionally, he can further hone his bend around the edge. The Ohio State DL owns impressive ankle flexion for his size and above-average hip flexibility. However, his torso isn’t as bendy or flexible on its own. This limits the degree to which he can shrink his surface area.

Furthermore, Harrison can do a better job sustaining his rushes. Improving his pass-rush counters and torso flexibility can help him here, but his explosiveness occasionally fades as he goes through his reps. That same explosion isn’t always sustained when changing direction. Harrison has strong initial get-off and short-area burst, but he’ll need that quickness beyond the rep’s first moments if he wants to produce.

Harrison can also struggle to disengage in run defense and can stand to play to his athletic potential more often. Moreover, the Ohio State DL can be late to react when reading option plays. To his credit, he improved his play recognition and reaction quickness in 2020. Further growth in 2021 will only bode well for the Buckeyes star.

Many players dream of the chance to play for a college championship, but few ever get to actively pursue that goal. Harrison’s natural talent earned him the opportunity to play for the Ohio State Buckeyes, one of the few CFB Playoff regulars on the college stage.

Harrison was one of the top players in the 2019 recruiting class. The Lewis Center, Ohio product was a five-star recruit and the 10th-ranked player on ESPN’s board. He was also the third-ranked defensive lineman, behind only Thibodeaux and Nolan Smith. On other boards, Harrison earned even higher rankings.

His 6’6″, 244-pound frame was already defined beyond its years, and his athletic upside was easily recognizable. On top of Harrison’s otherworldly size/speed combo, he logged a vertical jump near 38 inches in pre-college testing, only confirming his rare talent. He received offers from various schools, including Alabama, Clemson, Notre Dame, and USC. But being from Ohio, Harrison’s choice naturally kept him in-state.

Harrison joined the Buckeyes in 2019 and saw playing time as a true freshman. He was set to be behind Chase Young and Jonathon Cooper that year. However, when Cooper’s availability deteriorated due to injury, Harrison earned valuable experience. He played in 10 games, amassing 24 tackles, 5.5 tackles for loss, and 3.5 sacks, including a QB takedown in the Big Ten Championship.

He was expected to make a jump in 2020, and on tape, Harrison displayed progression. Yet, on the stat sheet, he was left craving further production. The rangy edge defender only played in seven games, accumulating 14 tackles, 4.5 tackles for loss, 2 sacks, 2 pass deflections, and a fumble recovery.

To this point, we have yet to see the best version of Harrison. In a way, that makes his upside even more exciting. The former five-star recruit still has some development to undergo, but his athletic potential is clearly visible on tape. In 2021, he’ll have another chance to run away with the starting job. And in the process, Harrison may earn more praise on the draft stage.