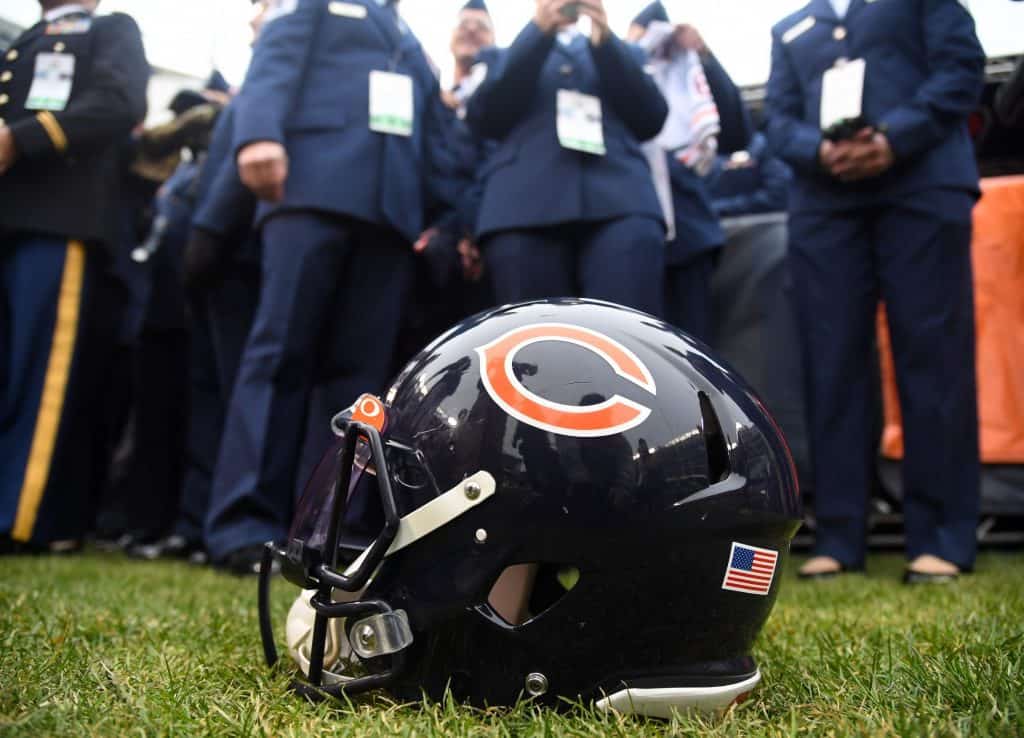 With several areas to improve on, how does the latest Chicago Bears 7-Round 2021 NFL Mock Draft shape up? The Bears enter the 2021 NFL Draft coming off their second playoff appearance in three seasons. However, that does not stop Chicago from needing to address several positions, including their quarterback situation.

The Bears’ depth chart for their offensive line has plenty of room for improvement. They could benefit from adding a right tackle, as well as adding both depth and competition at guard. Alijah Vera-Tucker is perfect as a first-round selection for the Bears. He demonstrated at USC that he can play both guard and tackle, which gives the Bears options with their rookie in 2021.

In his scouting report, Pro Football Network’s Chief Draft Analyst Tony Pauline described Vera-Tucker as having “terrific footwork, strength as a run blocker, and the tenacity to start in the NFL.” While Pauline believes Vera-Tucker is ultimately likely to settle at guard in the NFL, he comes with the potential to be a starting right tackle for the Bears in his rookie season.

As a transfer from Alabama, Aaron Robinson certainly has the pedigree to play cornerback in the NFL. The Bears recently signed Desmond Trufant to be their starting corner in 2021. However, they still need to add depth and a potential starter after releasing Kyle Fuller.

With Trufant and 2020 NFL Draft selection Jaylon Johnson set to start in 2021, the Bears do not need to rush any CB selection into immediate action. Therefore, it is a logical option for the Bears to invest a second-round pick in this 2021 7-Round NFL Mock Draft in the cornerback position.

In his scouting report, Pauline describes Robinson as “strong for his size” and “effective reading and diagnosing the action.” Pauline highlights that Robinson could be an ideal dime back in the NFL. If he can be that as a rookie for the Bears, he will provide a valuable option as a third cornerback. Whether Robinson can develop into a starting corner on the boundary is a concern. On the other hand, corners that can cover slot receivers are extremely valuable commodities in the NFL.

At 31 years old, Akiem Hicks is entering the final year of his four-year contract with the Bears. It is not a given that the Bears would choose to re-sign Hicks next offseason, at which point he would be 32. Therefore, they need to look to bring in an interior defensive lineman who could step up in Hicks’ place. Tommy Togiai has the talent to be that option, although he needs more time to add bulk and develop after just one year of big-time production.

For that reason, Togiai makes sense for the Bears. They have a settled line in terms of their starters. However, they need to add rotational pieces, as well as be looking at potential long-term options. Togiai would have the time to learn behind Hicks while providing high-impact potential in a rotational role. In his scouting report, Pauline described Togiai as a “quick, explosive interior lineman” as well as being a player who “gets leverage on opponents, moves well laterally, and pursues the play down the line of scrimmage.”

With the Bears moving on from Mitch Trubisky after his fourth season, Chicago is in the QB market. In this 2021 NFL Mock Draft, the Bears were not in a position to draft a viable starter in the first round. Consequently, they could be set to trade up into the top 10 on draft night if the player they like slides towards No. 10. In this mock, the Bears wait until the fifth round, where they draft a player in Jamie Newman who has plenty of upside potential.

Newman ended up not playing in 2020 after initially transferring to Georgia and then opting out. He looked good on Day 1 of the Senior Bowl before his performances dropped off through the remainder of the week. Some of that could be rustiness from not playing since 2019, but it does raise consistency concerns.

In his scouting report, Pauline discusses how Newman has the “physical skills to play in the NFL but needs a lot of work on the intangibles and details of the quarterback position.” That is the reason the Bears constitute a logical landing spot for Newman. With Andy Dalton and Nick Foles on the roster, the Bears do not need to rush a QB into a starting role this season. Those two experienced veterans can also mentor Newman.

Additionally, Newman is a good fit for the Matt Nagy system. When Chicago’s offense looked most impressive under Nagy, Trubisky was using his legs to make plays. Newman has the potential to make similar plays with his legs for the Bears. Nagy and the Bears offense comes from the Kansas City offense, in which Patrick Mahomes regularly uses his legs to make plays and move the chains.

The Bears already addressed their offensive line with Vera-Tucker in Round 1. Keep in mind, left tackle Charles Leno Jr. is entering the final year of his contract in 2021. For that reason, the Bears could look to double-dip in the offensive tackle market. A late-round selection on Kayode Awosika offers the Bears an opportunity to add two possible starters on their offensive line.

In his scouting report, Pauline highlights Awosika as a potential starting guard in the NFL. Pauline describes Awosika as “a devastating run blocker” but identifies that “he must brush up his techniques and improve his fundamentals.” Even if both Awosika and Vera-Tucker ended up moving inside to guard, the Bears need to address the interior of their line. Germain Ifedi is playing on a one-year deal in 2021 and James Daniels is in the final year of his rookie deal.

It is back-to-back Buffalo Bulls for the Bears in this 2021 NFL Mock Draft. The Bears need to add pass-rushing depth, both to play opposite Khalil Mack and as a backup behind him. Malcolm Koonce offers that potential for Chicago.

In his scouting report, Pauline describes Koonce as “a bit of a hidden gem as an edge rusher.” He is a player who plays bigger and faster than his listed size and speed. If the Bears can use him properly, Koonce could challenge to start opposite Mack as a rookie.

Chicago applied the franchise tag to Allen Robinson for the 2021 season. However, after flirting with Kenny Golladay, they will head into the 2021 season with no new additions at receiver. While it is not an immediate concern, it is a position they should look to address. If they do spend a late-round selection on a receiver, Tamorrion Terry is an intriguing option.

Terry is not the quickest receiver and is coming off a disappointing 2020 season. Nevertheless, he flashed potential throughout his career. In his scouting report, Pauline describes him as a “nice-sized receiver with consistent hands.” Pauline also highlights how Terry makes difficult receptions and uses his frame well. He could be an intriguing possession receiver on the outside for the Bears.

The Bears round out this 2021 7-Round NFL Mock Draft by addressing depth and adding a special-teams contributor. In his scouting report, Tony Pauline highlights Buddy Johnson as a good fit on the inside of a 3-4 alignment. Additionally, Johnson ran well at his pro day, with a Relative Athletic Score of 9.22. That athleticism should help him make the Bears’ 53-man roster as a special-teams player. He can then provide a depth option at linebacker, particularly as a specialist again the run.