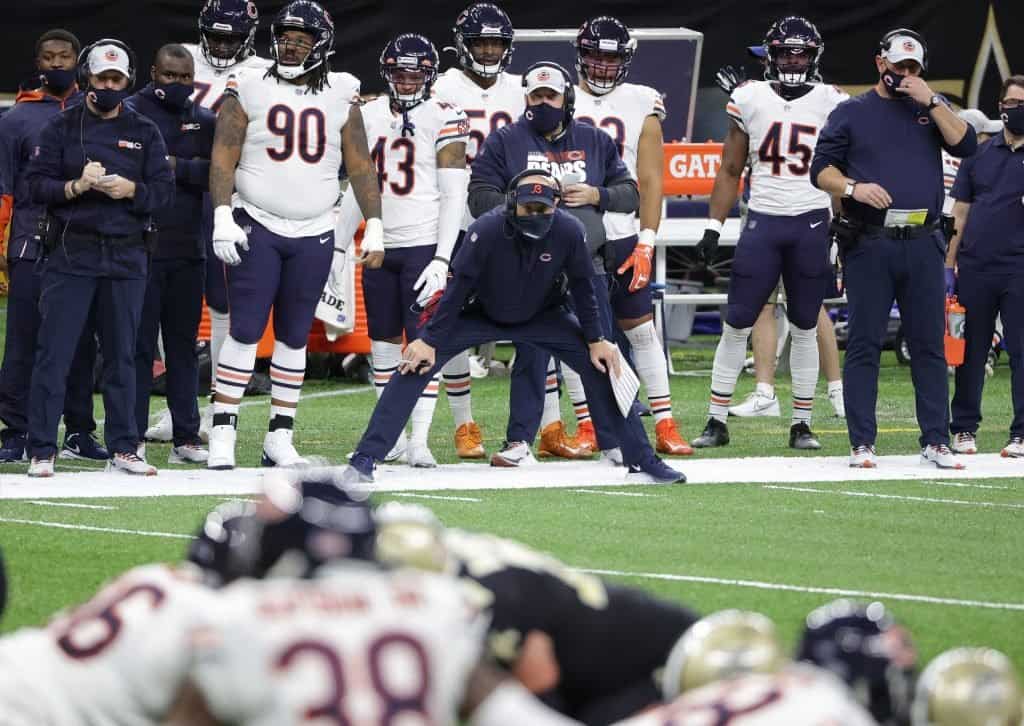 Following an 8-8 2020 season, the Chicago Bears face organization-wide changes should they come out of the gates slowly in 2021. With fans excited after a sensational NFL Draft (including a potential franchise QB), how does the rest of the Bears’ depth chart shape up as rookie camps fire up?

Can this roster climb to the top of the NFC North?

Who starts as the Bears’ signal-caller?

The Bears’ depth chart kicks off with a new veteran gunslinger in the Windy City as Andy Dalton joined the team in free agency. With Dalton, you get what you see. As the starter last season, Dalton led the Cowboys to a 4-5 record. He threw for 2,059 passing yards, 14 touchdowns, and 8 interceptions while completing 64.5% of his passes in nine starts. But will he even be the starter for Week 1?

During the NFL Draft, the Bears saw an opportunity to change the trajectory of their franchise. Four years after selecting Mitch Trubisky, the Bears traded up to pick No. 11 and selected Justin Fields. As QBs go, Fields is as dynamic as they come. In the pantheon of Bears quarterbacks, he could very well sit on top in terms of talent.

The main question is, who is the starter come Week 1? While Matt Nagy has stated it would be Dalton, can he really do that when the entire fan base is clamoring for the rookie? While I am all for not throwing someone into the fire, I expect Fields to jump Dalton on the Bears’ depth chart at some point this season.

Last season, Foles threw 10 touchdowns, 8 interceptions, and 1,852 yards as an off-and-on starter before finally being pulled in favor of Trubisky. There were rumors of the Bears shipping him back to the Philadelphia Eagles, although those seem to have been squashed after the team signed Joe Flacco.

Is he good or not? No one can seem to make up their mind when it comes to David Montgomery. Based on his end-of-season stats, one would assume yes. Montgomery rushed 247 times for 1,070 yards and 8 touchdowns. With Tarik Cohen out, he saw an increase in targets, catching 54 passes for 438 yards and 2 more scores.

Going into Week 11, Montgomery only owned 1 rushing touchdown before rattling off 7 over the last six weeks. If you extrapolate those final six games out to a 16-game season, Montgomery would have rushed for 1,595 yards and 19 touchdowns on 309 carries. For the Bears’ RB1, the truth in his game lies somewhere in the middle.

An explosive player the Bears hope returns quickly is Tarik Cohen. Essentially the Bears’ WR2, Cohen saw 91 targets in 2018 and 104 in 2019. He tore his ACL in early September and missed the rest of the season.

The Bears bolstered their depth chart by adding RB Damien Williams to a one-year deal. The 5’11”, 224-pounder has rushed for 1,231 yards and 12 touchdowns on 294 carries and caught 138 passes for 1,106 yards and 10 scores. Williams opted out of the 2020 season due to concerns surrounding the pandemic.

Khalil Herbert was selected by the Bears with pick No. 217 in the 2021 NFL Draft but is more likely to serve the team on kick returns than in the backfield.

For at least one final time, Allen Robinson is back with the Bears and may add Dalton to the incredible list of QBs he has been targeted by over his career.

The most underrated elite WR in the NFL, Robinson has averaged 144 targets, 84 receptions, 1,118 yards, and 8 touchdowns over the last six years despite being targeted by Chad Henne, Blake Bortles, and Mitch Trubisky. This also includes his 2017 season, in which he played in just one game due to a torn ACL.

If last season was any indicator of talent, Darnell Mooney appears to be a star in the making. Averaging 20.7 yards per reception, Mooney caught 48 passes for 993 yards and 8 touchdowns as a rookie in 2020.

As of right now, Anthony Miller is a Chicago Bear, but for how much longer? Rumors of him being shopped around swirl through the media. He recorded 49 catches for 485 yards and 2 touchdowns last season.

Chicago added several receivers in both free agency and the NFL Draft. Veterans Damiere Byrd and Marquise Goodwin joined the receiver room, as did Dazz Newsome, the No. 221 pick in the 2021 NFL Draft. Both Byrd and Goodwin bring a speed element to the depth chart, and Newsome could push Miller for his starting role before long.

The 43rd pick in the 2020 NFL Draft, Cole Kmet is one of the league’s up-and-coming tight ends. Kmet flashed his potential in limited playing time, finishing the season with 28 catches for 243 yards and 2 touchdowns. He will be the Week 1 starter at TE on the Bears’ depth chart.

Jimmy Graham’s 8 touchdowns were a season-high since 2017. He played in 16 games, catching 50 of 76 targets for 456 yards. 2021 will likely be his final season after expressing he wants to end his career with the Bears.

With the departure of their longest-tenured tackle, Charles Leno Jr., the Bears needed to address the hole in their depth chart. They turned to the NFL Draft and selected one of the most physical tackles of the class at pick No. 39 with Teven Jenkins. He was a three-year starter for Oklahoma State and should open as the Week 1 starter at left tackle.

The Bears added potential competition for the starting RT job to the depth chart by signing Elijah Wilkinson to a one-year deal. Wilkinson spent the past four seasons with the Denver Broncos, appearing in 45 games (26 starts).

Lachavious Simmons, a seventh-round pick of the Bears in 2020, was the only member of an HBCU selected during the 2020 NFL Draft.

After starting all 16 games last season at guard, the Bears and Germain Ifedi agreed to a one-year, $5 million deal during free agency. Ifedi can play either guard or tackle, which allows the Bears to use him all over the line if needed.

James Daniels was the Bears’ second pick (39th overall) in 2018. He suffered a season-ending pectoral injury in Week 5. Daniels is a versatile interior lineman who can play both guard and center.

Cody Whitehair moved to left guard from center for the final six regular-season games as the team tried to solve run blocking issues. Since joining the team in 2016, Whitehair has played and started in 78 of 80 possible games.

The Chicago Bears re-signed OL Alex Bars as an exclusive rights free agent this offseason. A 2019 UDFA, Bars started the final eight regular-season games for the Bears — one at center, one at left guard, and six at right guard — as well as their Wild Card loss to New Orleans.

Sam Mustipher spent his 2019 rookie season on the practice squad. He was elevated to the active roster before Week 6 last year and never gave the Bears an excuse to change their minds. Mustipher played in nine games with seven starts at center and is the front-runner for the starting job in 2021.