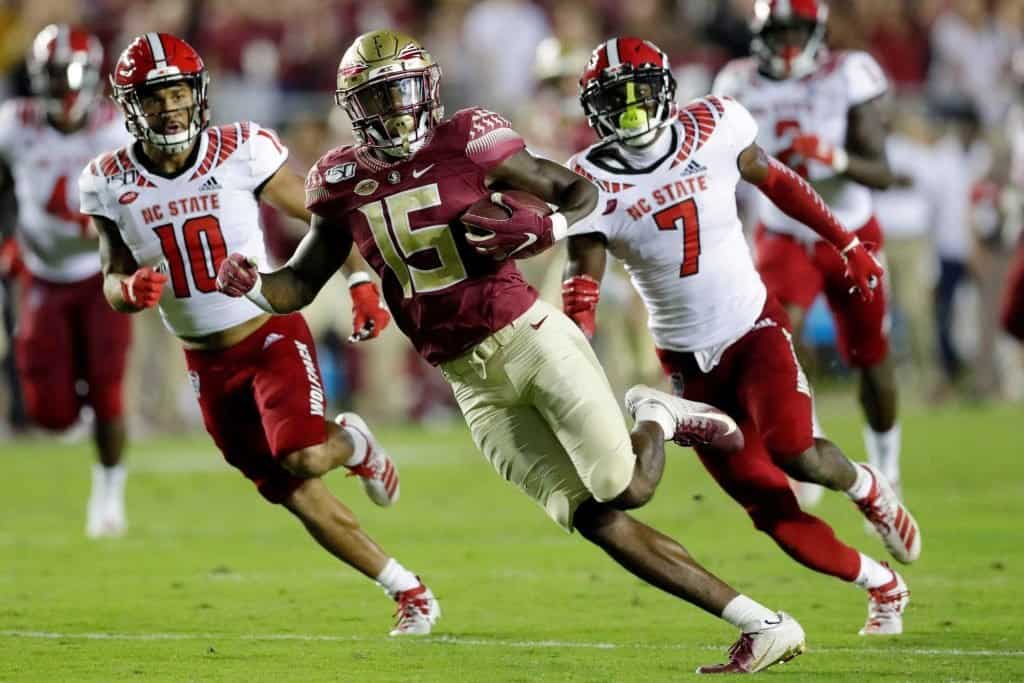 A tumultuous 2020 has threatened to derail Tamorrion Terry’s 2021 NFL Draft stock. This time last year, the Florida State wide receiver saw analysts labeling him a potential first-round pick. Since then, he has become somewhat of a forgotten man in a deep receiver class. Can he overcome this adversity to be a game-changing threat in the NFL?

Displays good awareness, settles into the open spot on the field, and uses his frame to shield away opponents. Tracks the pass in the air and makes the difficult over-the-shoulder reception at full speed.

Negatives: Not quick off the snap, plays to one speed, and does not show a burst. Must pick up the blocking intensity. Coming off a very disappointing season.

Analysis: Terry flashed ability throughout his Florida State career yet never truly elevated his play, in large part due to poor quarterback play at Florida State. He’s a nice-sized possession receiver who does not play to his forty-yard dash time, but Terry has the dependability to line up as a fifth wideout on Sundays.

Although he has become the forgotten man of the 2021 NFL Draft class, Tamorrion Terry has proven before that he can outperform expectations. A late bloomer at Turner County High School, his football journey hasn’t always been spent in the spotlight. Hailing from the small Georgia town of Ashburn, he played his early football in relative anonymity.

Despite a junior season in which the Associated Press voted him first-team All-State, Terry held just one offer entering his senior season. However, he would not need to wait long for the offers to pile up. As Turner County powered to their first playoff win since 2008, their big-bodied wide receiver earned Offensive Player of the Year honors.

With 40 catches for 1,187 yards and 19 touchdowns, the Region 2-A Player of the Year began to receive some recognition for his big-play ability.

Suddenly, the three-star recruit garnered offers from Ole Miss, Georgia, Florida, and Auburn. Despite the Tigers being early favorites to land his signature, Terry committed to play wide receiver at Florida State, saying, “I’ve liked the Noles for a long time. I like how the coaches are with the players and also their ability to use bigger receivers. This is where I want to be.”

Their ability to use bigger receivers — at least in Tamorrion Terry’s case — wouldn’t be demonstrated in 2017. As a freshman, the Florida State wide receiver didn’t see any game action. Instead, he spent the season taking reps with the scout team. It wasn’t the immediate impact he may have anticipated, but it prepared him for a breakout season the following year.

With Auden Tate leaving for the NFL Draft, Tamorrion Terry took his opportunity and secured it with both hands. As a redshirt freshman, Terry rewrote most of the Florida State wide receiver record book. His 744 receiving yards were a program record for a freshman. He became the first freshman with a team-high 8 touchdowns since 2011 to lead the team in both receiving yards and touchdowns.

In 13 starts, he racked up 1,188 receiving yards and 9 touchdowns on 60 catches. Enhancing his high school reputation as a big-play threat, he led the NCAA with an incredible 57.89 yards per touchdown. A combination of his ability to win contested catches and gain yards after the catch made him a force to be reckoned with.

He could have left FSU at the end of that year but decided to return for his senior season. Unfortunately, things couldn’t have gone much worse for the Florida State wide receiver.

He received knee surgery during the offseason and reported a fallout with the new coaching staff. Terry would go on to generate just 23 catches for 289 receiving yards and 1 touchdown. He played one final game following another knee surgery before his college football career was unceremoniously brought to an end.

After opting out midway through November, Tamorrion Terry began preparing for the 2021 NFL Draft.

Tamorrion Terry’s performance at the FSU Pro Day may force people to go back and watch that 2018-2019 tape ahead of the 2021 NFL Draft. The Florida State wide receiver posted impressive measurements for arm length and broad jump, and set a blazing 4.44 second 40-yard dash time for a man of his size. The forgotten man of the NFL Draft jogged a few memories.

There are multiple teams in the 2021 NFL Draft that could use a big-bodied, big-play receiver like Tamorrion Terry. Despite their recent free-agency splurge, the New England Patriots are a stellar landing spot. Additionally, the San Francisco 49ers, Kansas City Chiefs, and Baltimore Ravens are prime candidates to draft a wide receiver this April.

If he can put 2020 behind him, Tamorrion Terry could prove an excellent value in the 2021 NFL Draft.