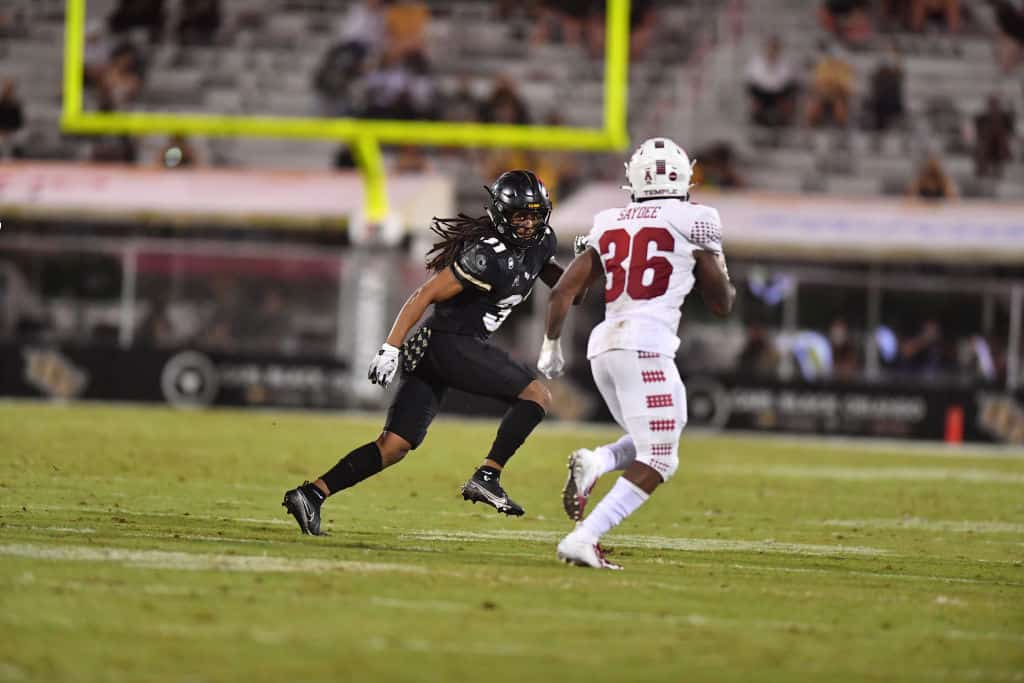 Since appearing in Daniel Jeremiah’s initial first-round mock draft, and following a strong Senior Bowl week, UCF cornerback Aaron Robinson is a hot commodity ahead of the 2021 NFL Draft. Putting the hype aside, how did he get here and can he really be one of the first cornerbacks drafted in the annual selection event?

Positives: Alabama transfer who was the starting nickel back for Central Florida. Well-built cornerback effective facing the action. Flips his hips transitioning with opponents, effectively covers receivers on crossing patterns, and displays a good burst to the ball. Physical and engages receivers at the line of scrimmage. Fires upfield defending the run. Strong for his size, defeats blocks, and works to make plays on the ball handler. Effective reading and diagnosing the action.

Negatives: Possesses average play speed despite timing 4.41 seconds in the forty at his pro day. Hesitates to react to receivers’ moves off the line and is usually a half-step behind opponents. Average instincts.

Analysis: Robinson was given middle-round grades by scouts entering the season but plays more like a late-round choice. He’s a dime back who must face the action, and at the same time, he must improve his instincts.

From Florida to Alabama and back again, Aaron Robinson has had an interesting journey to the 2021 NFL Draft. The three-star cornerback out of Deerfield Beach High School had a standout high school senior season that led to First Team All-Class 8A honors. Tenacious and productive, he racked up 41 tackles and 4 interceptions in his final high school season.

His recruiting journey is as enticing as his high school performances. Despite only being ranked as the 55th cornerback in the class, he was a highly sought-after prospect. Early offers came from across the country, including Wisconsin, Rutgers, and Mississippi State.

It was an offer closer to home that held his early attention. Robinson committed to the in-state Florida Gators midway through 2015. Later in the process came an offer from SEC powerhouse Alabama. Following a visit to the Crimson Tide in late January, he rescinded his commitment to Florida.

“It wasn’t the best thing for me. I didn’t feel secured after that,” Robinson said, citing a lack of a visit from then-Gators head coach Jim McElwain. Robinson then went on to sign his National Letter of Intent to Alabama.

Despite entering an Alabama cornerback room crammed with talent that would eventually be first-round NFL Draft selections, Aaron Robinson saw some playing time immediately. He registered 5 tackles including a tackle for loss as a backup cornerback while also seeing time on special teams.

His time with the Crimson Tide would be brief, however. Entering the transfer portal prior to his sophomore season, he opted to return closer to home with Central Florida as his destination. Due to NCAA transfer regulation, he would have to sit out the 2017 season, but the UCF cornerback was ready and raring to go for the start of the season.

Unfortunately for Robinson, his debut against Connecticut didn’t go as the UCF cornerback had planned

After being knocked out cold following a heavy hit during a kickoff, Robinson was stretchered off and forced to miss a significant chunk of the season with a concussion. He made just 8 tackles and registered a single pass breakup.

His play over the next two years, however, would ensure that Aaron Robinson would appear on the 2021 NLF Draft radar. A twice Second Team All-American, he led the team in pass breakups as a senior in 2020. During his junior season, he secured his only career interception against Stanford.

The UCF cornerback proved to be reliable in coverage and tough against the run, traits which will make him valuable as he transitions to the NFL. Following the 2020 season, UCF cornerback Aaron Robinson declared for the 2021 NFL Draft. He accepted a Reese’s Senior Bowl invite where his performances in practice helped further improve his draft stock.

What has made UCF cornerback Aaron Robinson such a hot commodity in advance of the 2021 NFL Draft? It starts with his unique versatility. At almost 6’0″ and 186 pounds, he has the stature of an outside cornerback but has carved a reputation as one of the best slot cornerbacks in this class.

His experiences of playing both outside and in the slot makes him incredibly versatile, and therefore valuable. Although he projects to play predominantly in the slot, a team could play him on the outside without worrying about him being a liability. He also has experience of playing both zone and man coverage making him scheme transcendent as well.

In man coverage, Robinson shows good ability to mirror his receiver, and therefore, stay sticky in coverage. He is physical at the line of scrimmage as well. His physicality also manifests itself in his ability to play strong against the run. He isn’t afraid to get stuck in at the line of scrimmage. Additionally, he has shown some pass-rush ability in his time at UCF.

Although it isn’t well demonstrated in his career statistics, he has shown good ball skills. He has good football instincts that help him locate the ball and make the pass breakup.

What are some potential concerns with Aaron Robinson?

One of Aaron Robinson’s best qualities as a prospect in the 2021 NFL Draft is his physicality at the cornerback position. However, there is the potential that becomes one of his biggest concerns at the NFL level. He can be very grabby which is likely to lead to penalties. This was evident in not only his college film but during practice at the Senior Bowl.

Although he has the ability to mirror receivers with decent athleticism, it would be a stretch to say he is fast. A lack of top-end speed could limit his coverage ability against faster receivers in the NFL. He ran a 4.39 at his pro day, but he doesn’t always play to that speed.

As always, it’s important not to focus on statistics when analyzing prospects. However, you would like to see him turn some of the pass breakups into interceptions. I witnessed some plays where it appeared that catching the ball would have been possible. Yet, it was merely deflected away.

As a scheme versatile player in the 2021 NFL Draft, UCF cornerback Aaron Robinson will be on the radar of multiple teams. Some teams with cornerback needs include the Dallas Cowboys, San Francisco 49ers, Denver Broncos, and Houston Texans. There will definitely be a market for his services.

Can he really be considered as a first-round prospect? In his latest big board for Pro Football Network, Tony Pauline lists UCF cornerback Aaron Robinson as his ninth-ranked cornerback in the 2021 NFL Draft class. Pauline gives him a third-round grade is his 71st overall prospect.