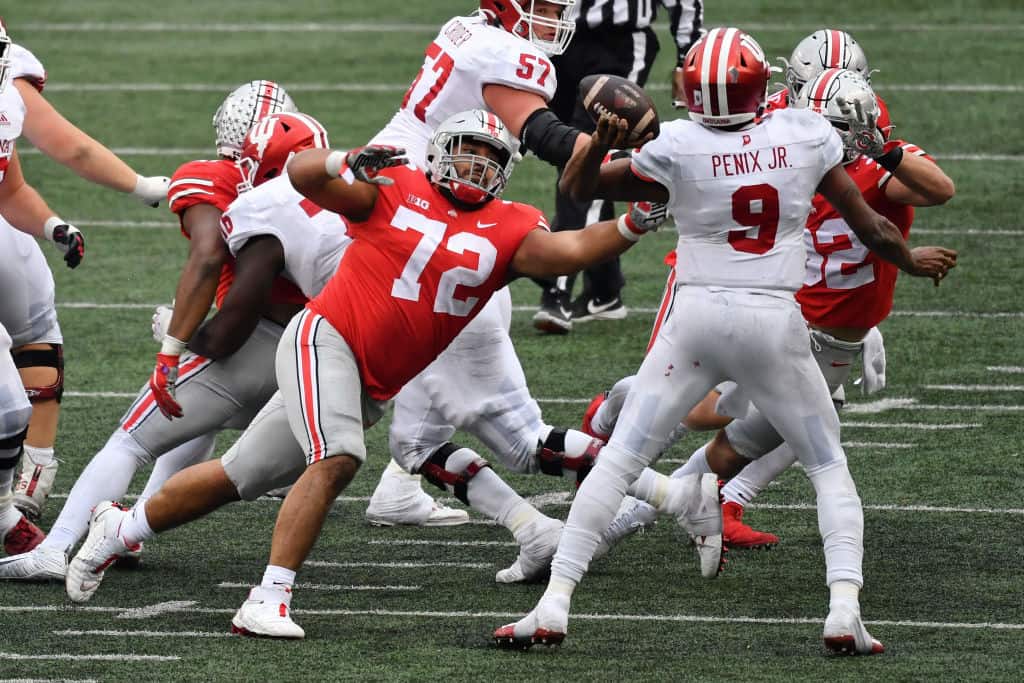 The 2021 NFL Draft‘s interior defensive line class still isn’t inspiring all the way across. However, over the course of the 2020 season, several defensive tackles emerged as potential early picks at the position. One of those defensive tackles in this year’s NFL Draft is Ohio State’s Tommy Togiai. How does Togiai win against opposing offensive linemen, and does his playstyle project well to the NFL?

Positives: Quick, explosive interior lineman who plays like a strong 3-technique tackle. Fires off the snap with a great first step and plays with excellent lean and proper pad level. Gets leverage on opponents, moves well laterally, and pursues the play down the line of scrimmage or outside the box. Works his hands throughout the play, jolts blockers with a violent punch, and knocks them back off the ball. Consistently doubled by opponents in the middle of the line.

Negatives: Lacks bulk and gets tied up in blocks too often. Turned in just one year of big-time production for Ohio State before turning pro.

Analysis: Togiai elevated his game last season and was the force opponents had to account for on every snap in the middle of the Ohio State line. He comes with average size and limited growth potential but would be a good addition as a defensive tackle in a four-man line.

Normally, you don’t see college football dynasties making the trip out to Pocatello, Idaho to do recruiting. But in the case of Tommy Togiai, the Ohio State Buckeyes chose to make an exception.

Despite playing in a relatively obscure location, Togiai was one of the highest-rated players at his position in the 2018 recruiting class. Togiai graded out as a four-star prospect and the fourth-best prospect at the defensive tackle position. At 6-foot-2, 295 pounds, he already had the desired size from a defensive tackle prospect. His hard-nosed, physical style only served to solidify his stock.

The Buckeyes weren’t the only prestigious team to offer Togiai. By the end of his recruiting cycle, the future Ohio State defensive tackle had offers from Michigan, Oregon, Penn State, and USC. But the pedigree of Ohio State’s football program allured Togiai. Thus, he committed to play for the Buckeyes.

It didn’t take long for Togiai to see the field for Ohio State. He made his way onto the field as a true freshman, serving as a rotational lineman. Appearing on defense in six games, Togiai logged 10 total tackles and 2.0 tackles for loss, setting a foundation for his Ohio State career.

In 2019, Togiai saw a bit more action, but the season was essentially a continuation of his true freshman campaign. Togiai only amassed 16 total tackles, a pass deflection, and 2.0 tackles for loss. Despite the minimal uptick in production, however, Togiai’s first two years helped build up to a career season in 2020, one that has him now listed as a breakout NFL Draft candidate.

Once a mere run stuffer, Togiai has developed into a more complete defensive lineman this year.

In seven games for the Buckeyes, he has 23 total tackles, 4.5 tackles for loss, 3.0 sacks, two pass deflections, and a forced fumble. Projecting to a normal 14-game season with a conference championship and a bowl game, Togiai would be on pace for 9.0 tackles for loss and 6.0 sacks. As an interior lineman, those are impressive numbers.

Unfortunately, Togiai was unable to play in the National Championship against the Alabama Crimson Tide. But he’s already made an impression on the college football stage. Togiai received recognition as a second-team All-Big Ten selection, and his breakout bodes well for his eventual NFL career. There’s no word on whether or not Togiai will declare as a true junior. However, after his 2020 season, it has to be a compelling consideration.

Togiai is a bit slept-on at the moment, but that shouldn’t last for long. The Ohio State defensive tackle possesses many of the building blocks required to succeed on the interior defensive line. Most notably, his raw power and explosiveness off the line.

Togiai stores an exceptional amount of explosive potential in his lower body. His initial burst gives interior linemen a lot to handle, and he’s pleasantly consistent with that burst.

Togiai’s burst serves as a perfect complement to his upper-body strength and functional power in run defense. Furthermore, Togiai’s burst allows him to hit linemen with devastating momentum when playing on the pass rush unit. It also allows him to get leverage by shooting gaps.

Togiai’s power is far from a supplementary trait, however. Togiai’s power is just as, if not more, fundamental to his game. The Ohio State defensive tackle’s length isn’t the best, a factor which partly derives from his height. However, Togiai’s functional strength is excellent. He also has swift, heavy hands, and his strength allows him to plant a strong anchor at the point of attack.

Where can Togiai improve?

In his breakout 2020 season, Togiai showed solid improvement as a pass rusher. He also retained his utility as a stout run blocker who’s hard to move. In all honesty, there aren’t too many notable limitations with Togiai, but there are some areas where he can improve.

As one might expect, while Togiai has great hustle in pursuit, his pursuit speed isn’t top-tier. Additionally, Togiai can be more diverse with his hand techniques as he rushes. There are some occasions where Togiai simply establishes his anchor and struggles to disengage. Being more consistently active with his hands could help.

Furthermore, Togiai’s relative lack of length and torso flexibility limits his pass rushing upside a bit. He has a high floor and a decently high ceiling. However, a few other linemen supersede him in the draft class. Nevertheless, Togiai’s explosiveness, power, and natural leverage make him a solid, versatile threat on the interior, and his stock continues to rise as the NFL Draft nears.

The 2021 NFL Draft’s defensive tackle class has aged well since last fall, and a big part of that has been athletic testing. This class is filled to the brim with exciting athletes, and Tommy Togiai is near the top of the list.

At his Ohio State pro day, Togiai measured in at around 6-foot-1.5 and 296 pounds. With that size, he logged a 5.01 40-yard dash, a 32-inch vertical, a 105-inch broad jump, a 7.2 three-cone time, and a whopping 40 reps on the bench. These numbers only confirm Togiai’s exciting blend of power and explosiveness, and they legitimize his Day 2 upside in the NFL Draft.

In an Ohio State draft class that includes Justin Fields, Wyatt Davis, Baron Browning, Pete Werner, Josh Myers, Shaun Wade, and Jonathon Cooper, among others, Togiai is trending toward the top. He’s still comfortably in the middle of the group. However, he’s worked himself into the Day 2 range with his impressive play in 2020.

Togiai has enough burst and carries enough weight with his hands to be a formidable pass rushing threat in the NFL. Additionally, his skill set is naturally conducive to success in run defense. In that phase, dominating play strength earns players an inherent advantage.

Togiai most often plays as a 4-3 defensive tackle for the Buckeyes. That said, his power and leverage should translate to several different roles, making him a candidate for 3-4 teams as well.

At this point, any team with a need for a boost on the defensive line has reason to select Togiai on Day 2. Where Togiai is ranked will ultimately be a subjective matter from team to team. Nevertheless, squads like the Atlanta Falcons, Green Bay Packers, Las Vegas Raiders, and Cincinnati Bengals could be good fits for Togiai.

But in truth, if you’re a team with a need for better run defense and pass rushing upside on the interior, Togiai is one of the safer, more well-rounded players available.

As the defensive tackle class continues to settle, Ohio State’s Tommy Togiai has a good chance to keep rising. He has the necessary athleticism and power to produce in all phases. Although he’s not the longest player, he makes up for that with strength, leverage, and a motor that’s always running hot.