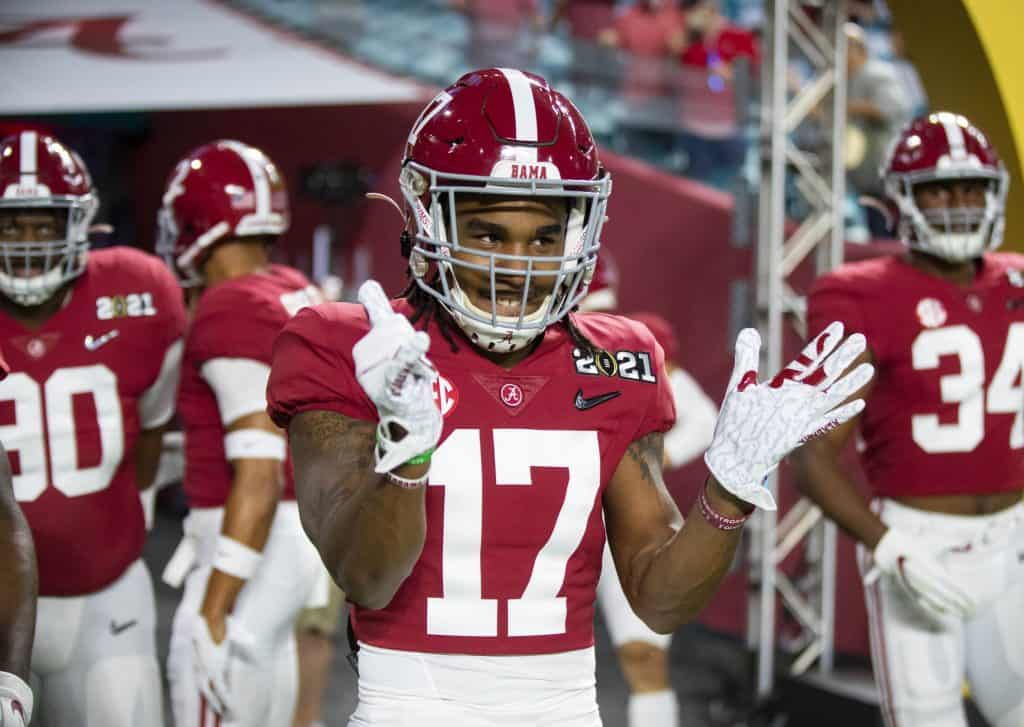 After the initial wave of free agency and ahead of the 2021 NFL season, former NFL scout and ESPN analyst Matt Williamson shares his latest 2021 First Round NFL Mock Draft. With just a few weeks until the NFL Draft, how does Williamson see the first round shaping up?

Any pick other than Trevor Lawrence would be a massive shock for Jacksonville. Write it in sharpie — he is going to be a Jaguar.

With the trade of Sam Darnold to Carolina, this pick of Zach Wilson is nearly a forgone conclusion for the Jets. New York still has a ton of draft capital over the next two years to build around their new quarterback.

The 49ers paid heavy in the way of draft picks, but they are going to get a quarterback that they adore. To me, this is like buying a sensible sedan that is good on gas mileage at the price of a Lamborghini, but Mac Jones will operate Kyle Shanahan’s offense as it is drawn up.

Although we don’t know exactly which three quarterbacks will be off the board at this point, this is when the 2021 NFL Draft truly begins. Atlanta could be open for business with this pick, and maybe a team like the Broncos or Patriots move up for a quarterback.

If the Falcons stay pat, however, they have a difficult decision to make between a quarterback and a win-now receiving option. In this scenario, I have them taking their future face of the franchise in Trey Lance.

The Bengals have to decide between pass blockers and pass catchers for Joe Burrow. Cincinnati hasn’t done enough to upgrade their offensive line, but they still have the ability to attack that need on Day 2. Kyle Pitts is just too special to pass up, and with Burrow’s head for the game, Pitts will immediately become a mismatch nightmare.

After moving down three spots following two trades, the Dolphins can sit back and let a premier offensive prospect fall in their lap. They do exactly that here and land an elite wide receiver in Ja’Marr Chase to make Tua Tagovailoa’s life a little easier in his second season.

The Lions very well could be high on Jared Goff, but this new front office and coaching staff are working on long-term contracts and have to think big picture. This rebuild in Detroit isn’t going to happen overnight. So why not start with an ultra-talented quarterback in Justin Fields and see where it goes from there?

This pick should absolutely be dedicated to making Darnold’s transition to his new team as easy as possible. A franchise offensive tackle such as Penei Sewell makes a ton of sense, and with Christian McCaffrey returning from injury, Carolina has a chance to be pretty good on this side of the ball in 2021.

It looks like drafting a quarterback didn’t go Denver’s way. Great linebackers that never leave the field are something that Vic Fangio covets and has really utilized well over the years in his defensive scheme. Micah Parsons fits that bill completely.

Dallas runs to the podium to select the highest-rated cornerback in this draft class. Patrick Surtain should immediately help this Cowboys’ ailing secondary. He is exactly what the doctor ordered in The Big D.

This 2021 First Round NFL Mock Draft works out wonderfully for the Giants. Rashawn Slater is a stellar prospect that can help anywhere on the offensive line. With Saquon Barkley returning, Kenny Golladay now in the picture, and adding Slater, Daniel Jones should have everything he needs to succeed around him.

A dynamic wideout like Jaylen Waddle could do wonders for Philadelphia’s offense. The Eagles get prominent offensive linemen back from injury and should have a strong running game with Jalen Hurts at the helm. Waddle’s big-play abilities would make it difficult for opposing defenses to crowd the line of scrimmage, and he is a great value here at No. 12.

Speaking of value, the Chargers get a fantastic prospect in DeVonta Smith near the middle of the first round. Hunter Henry is gone, but the trio of Keenan Allen, Mike Williams, and Smith make defending Justin Herbert and the Chargers’ passing game very difficult.

Minnesota’s offense was far better than their defense in 2020. That being said, Minnesota’s offensive line has been a work in progress for too long now. Drafting Alijah Vera-Tucker could go a long way to finally changing that.

After unloading the Brink’s truck in free agency, the Patriots ideally would add one of the top quarterbacks — most likely in a trade up — but that is not how the board fell in this 2021 First Round NFL Mock Draft.

We know that Bill Belichick’s defense is built on great man-coverage cornerbacks, and who is to say how much longer Stephon Gilmore will be in the mix in New England at his current cost? Thus, the Patriots draft Jaycee Horn to add depth to the position.

This might seem a little early for Greg Newsome, and the Cardinals certainly would have jumped on Horn had he made it past New England, but cornerback is a huge need. Arizona can use someone with Newsome’s size and length. Plus, Newsome displayed his athletic profile at Northwestern’s Pro Day.