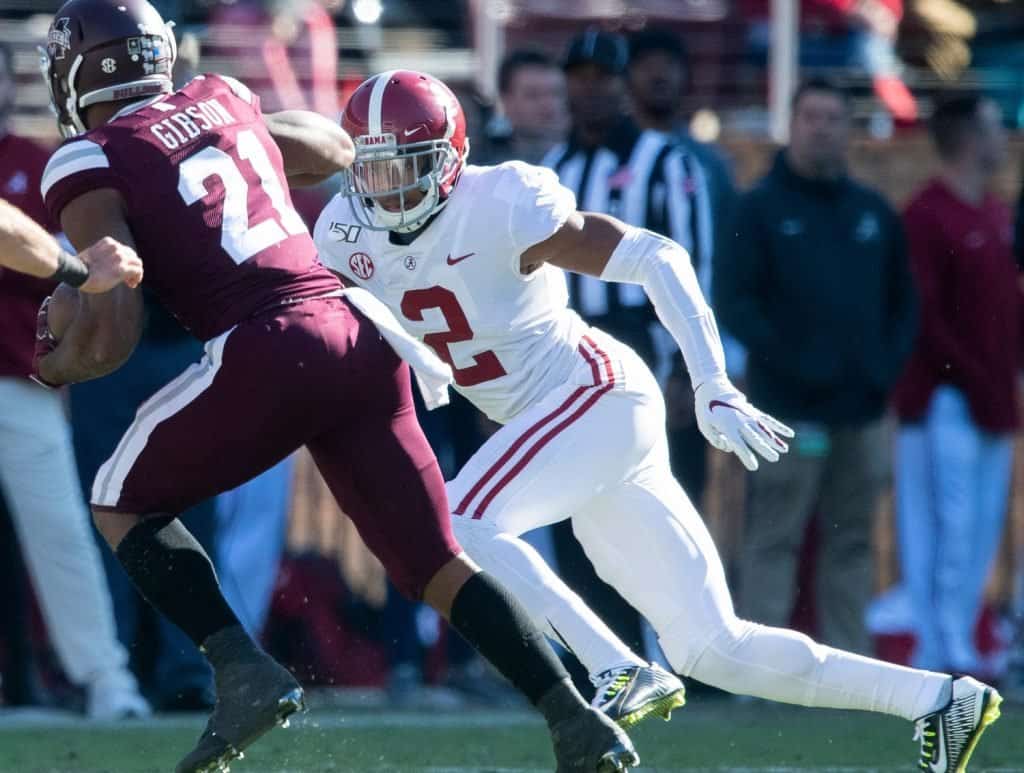 Alabama defensive back Patrick Surtain, II, (2) against Mississippi State at Davis Wade Stadium on the MSU campus in Starkville, Ms., on Saturday November 16, 2019. Surtain1001
Not too late to get the PFN 2021 NFL Draft Guide!
Want to find out what PFN Chief Draft Analyst Tony Pauline had to say about prospects who were drafted by your favorite team? It’s not too late to download the PFN 2021 NFL Draft Guide. Click here to download for free!

The obvious pick here would be someone to come and play on the offensive line. With both Richie Incognito and Denzelle Good being in their 30s and no real solution at right tackle, that would make sense. However, their defense equally needs as much help, and with the earlier run on OT prospects, Las Vegas decides to go best player available here.

Penn State’s Micah Parsons has seen a dip in his draft stock over the last few months due to character concerns and the fact that he opted out of 2020. I don’t put much stock into either of those things and believe Parsons is a home run pick here for the Raiders.

“Micah Parsons is somewhat of a blank canvas as a defender. He came to Penn State as a defensive end, and as a freshman playing linebacker was already considered one of the top five prospects coming into his sophomore year. He is a freak athlete with legitimate pass-rush chops, and he hits like the King of Asgard.”

I am sure that the running backs don’t matter crowd will hate this selection for the Miami Dolphins. When making this pick, I debated a potential second trade back for Miami, but with some RB-hungry teams coming up, I figured it best for them to just get “their guy.”

Alabama’s Najee Harris is the best running back in this class. People can make a case for Travis Etienne, but Harris is the kind of dual-threat back that can completely transform a run game.

Miami’s rushing attack has been lacking at best these last few years. Myles Gaskin and Salvon Ahmed were the clubhouse leaders in 2020, and they collectively contributed 903 rushing yards and 8 touchdowns on 217 carries.

Harris will be a welcome addition to a young team still in the process of an offensive makeover.

Texas’ Samuel Cosmi saw a drop in his draft stock when ESPN’s Mel Kiper suggested he return to school for another year. Any trepidation teams might have had surrounding Cosmi and his skill set disappeared after an impressive pro day.

Cosmi measured in at just nearly 6-foot-6 and 314 pounds, with 33-inch arms. He then ran an impressive 4.85 40-yard dash. Additionally, he jumped nearly 10 feet in his broad jump and 30 inches in his vertical jump.

Cosmi proved to be a physical specimen, and with the newly acquired Ryan Fitzpatrick now under center for Washington, the team will need to make sure they protect the journeyman QB.

The Chicago Bears need to draft a QB. In this 2021 NFL First Round Mock Draft, they were probably one of the teams on the phone trying to trade up with Miami. Unfortunately, they do not have the same draft capital as some of the other teams willing to move up.

So, instead, they bring in Teven Jenkins from Oklahoma State to help protect their new starting QB, Andy Dalton.

I don’t think there has been a draft prospect who has had a better offseason than Minnesota’s Rashod Bateman. According to what Bateman himself put on social media, the WR ran a sub 4.40 40-yard dash. That is quite fast. In 2019, wide receivers ran the 40-yard dash at a 4.50 average.

The Colts need offensive weapons for newly acquired QB Carson Wentz. With T.Y. Hilton still searching for a new home in free agency, Bateman should step in and make an immediate impact.

The Tennessee Titans need to add a pass rusher in this draft. Luckily, the way this board falls for them, they can land one of the best in Michigan’s Kwity Paye.

Paye might only have average speed on the perimeter, but he can produce pressure from the inside. He would fit this defensive scheme perfectly. Looking at PFN’s Chief Draft Analyst Tony Pauline’s most recent scouting report, he had a number of positive things to say about Paye:

“Hard-working, relatively athletic defensive end who leads by example. Displays great explosion in his game, fires off the snap, and plays with excellent pad level, getting leverage on opponents. Effectively uses his hands to protect himself, bends off the edge, and displays good change-of-direction skills.”

After the Jets drafted Zach Wilson earlier in this 2021 NFL First Round Mock Draft, they now select USC’s Alijah Vera-Tucker to help protect him. New York will likely look to add offensive weapons, but they can address those needs on Day 2 thanks to deep WR and RB classes.

New York selected Mekhi Becton in the first round of last year’s draft, and George Fant was pretty good in 2020, but drafting Vera-Tucker could give the Jets their two starting tackles for years to come.

Clemson’s Travis Etienne has been in the conversation for RB1 since the beginning of the draft process. He just ran a 4.40 40-yard dash at Clemson’s Pro Day and has proven to be an elite talent.

With their second pick in this 2021 NFL First Round Mock Draft, the Jaguars select Notre Dame’s Jeremiah Owusu-Koramoah. Owusu-Koramoah is an explosive three-down linebacker.

If the Cleveland Browns truly want to contend for a Super Bowl, they will need to improve on defense. Bringing in another pass rusher opposite Myles Garrett is a good start. Tulsa’s Zaven Collins is fast, with a great burst that allows him to get to the ball quickly.

In Pauline’s latest scouting report, he had this to say about the Tulsa linebacker:

“Explosive, game-impacting linebacker who was a three-year starter for Tulsa. Instinctive, breaks down well, and quickly locates the ball handler. Forceful up the field and plays with balance as well as body control. Gives effort defending the run and attacks assignments as well as opponents.”

The Baltimore Ravens need to bring someone in to help them in coverage because, in all honesty, DeShon Elliott and Chuck Clark are not very good in that aspect. TCU’s Trevon Moehrig would make a great third safety that defensive coordinator Don Martindale could use in several packages.

The New Orleans Saints are heading into the post-Drew Brees era. They start that off by focusing on their defense and drafting Greg Newsome out of Northwestern.

Newsome improved his draft stock during Northwestern’s Pro Day, where he ran a 4.31 40-yard dash. He will come in and be a Day 1 starter across from Marshon Lattimore.

The Green Bay Packers made a surprising move and signed Aaron Jones to a long-term deal. This somewhat changed the RB landscape and transformed what the team needs to do in the 2021 NFL Draft.

Now, the team can address their perennial need for a legitimate WR2 by grabbing Purdue’s Rondale Moore. When deciding between Moore and Kadarius Toney from Florida, I decided to go with Moore’s upside. My only hesitation with Moore to the Packers, however, is his size.

Related | Rondale Moore Dynasty Value: Where to draft him in 2021 rookie dynasty drafts?

Moore burst on to the scene in 2018 as a true freshman with a huge season. He was targeted 154 times, hauling in 74 percent of those passes for 1,258 yards and 12 touchdowns, with most of his snaps coming from the slot.

What is most impressive about Moore is what he can do after the catch. Of his total yards, 892 of them came after the catch, the most in college football that year. Moore is a selection that would make Aaron Rodgers happy.

The Buffalo Bills made some moves in free agency to address their most glaring needs. After re-signing LB Matt Milano, bringing in WR Emmanuel Sanders and TE Jacob Hollister, they turn their attention to the defense in this 2021 NFL First Round Mock Draft.

Christian Barmore was one of Alabama’s standout performers in the title game against Ohio State. He is an impressive presence that will make this Bills defensive line all that much better.

The Kansas City Chiefs started free agency by releasing what felt like their entire offensive line. They then brought in former Patriot Joe Thuney to start putting the pieces back together. In this 2021 NFL First Round Mock Draft, they bring in one of the more impressive offensive linemen in Oklahoma’s Creed Humphrey.

Humphrey had an impressive pro day, putting up insane numbers in the vertical, 40-yard dash, and bench press. With Thuney and Laurent Duvernay-Tardif on the line with him, Humphrey should help protect Patrick Mahomes.

With the last pick of this 2021 NFL First Round Mock Draft, the Super Bowl champions look to improve their defense by adding Jaelan Phillips. With Jason Pierre-Paul aging, the Bucs bring in a boost along the defensive line. I would also expect them to grab a running back at some point to try and replace free agent Leonard Fournette.