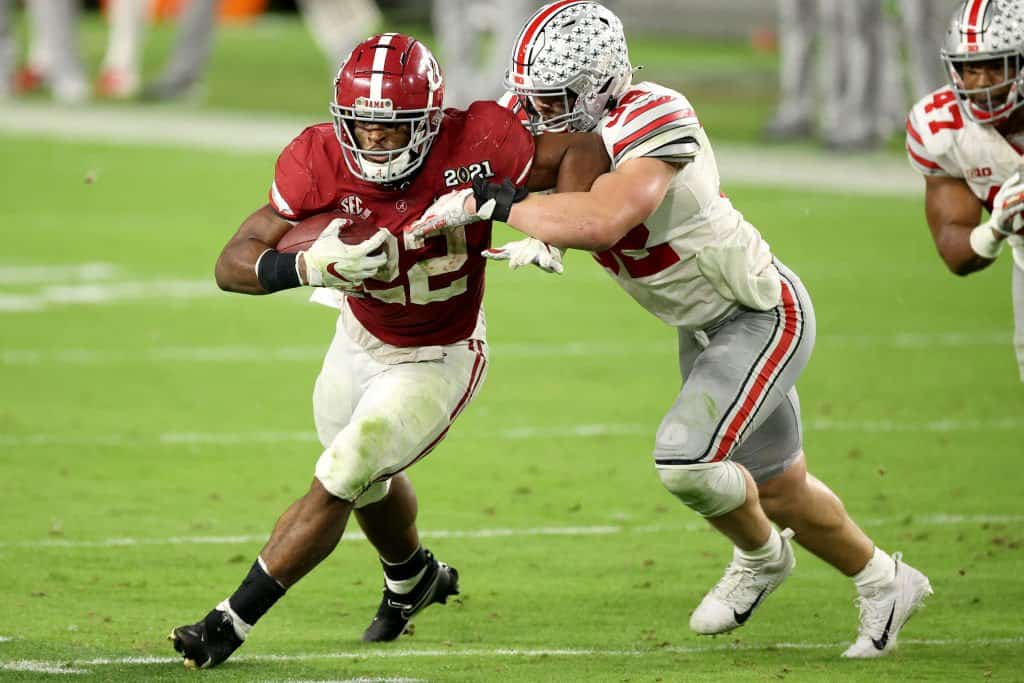 MIAMI GARDENS, FLORIDA - JANUARY 11: Najee Harris #22 of the Alabama Crimson Tide breaks a tackle from Tuf Borland #32 of the Ohio State Buckeyes during the College Football Playoff National Championship at Hard Rock Stadium on January 11, 2021 in Miami Gardens, Florida. (Photo by Jamie Schwaberow/Getty Images)
What's in this article? Click to show
Najee Harris dynasty value for 2021
Where should you draft Harris in dynasty rookie drafts?
Unlike QBs or even WRs at times, Harris and other RBs can have more dynasty value early in their fantasy careers
Want more NFL news and analysis?

Playing at one most coveted position in fantasy football, Alabama RB Najee Harris is set to head into 2021 dynasty drafts with as much value as any other rookie this season. What is Harris’ fantasy value heading into dynasty drafts in 2021?

Despite what zero-RB truthers want you to believe, running backs are the backbones of your dynasty teams. Where receivers can extend your championship window, RBs are the ones who push you over the edge. In 2021, Harris is in a league of his own when it comes to his potential dynasty value.

Even to the most critical of analysts, it’s hard to find a flaw in Harris’ game. His vision is incredible, and he moves in a way a 6’2″, 230-pound player shouldn’t be able to move. The acceleration to get through the hole is fantastic, and while not a burner, his speed is more than adequate for the NFL game.

Unless you are in a Superflex dynasty league, no player has more fantasy value in 2021 than Harris. You have a three-down back with the size and skill set to last in the NFL from day one. The fact the Pittsburgh Steelers selected him at pick No. 24 is literally the perfect situation. All this did was solidify his position at the 1.01 in 1QB leagues.

From a pure value standpoint, if I was in a startup right now where rookies were involved rather than a separate draft, Harris is going early. He is one of just a handful of players I will take at value in a startup draft.

I would take him over players like Ezekiel Elliott, Cam Akers, Miles Sanders, Josh Jacobs, and Clyde Edwards-Helaire. Harris is already an RB1 in dynasty without having played a single snap. I don’t think there is much debate who the best RB is from fantasy perspective in the 2021 rookie class.

Where should you draft Harris in dynasty rookie drafts?

If you want to land Harris in your dynasty rookie drafts, I hope you have a top-two pick. Honestly, that only applies to Superflex formats. If you are in a 1QB dynasty league, Najee Harris is the undisputed, slam dunk 1.01 regardless of team need.

Your team can never have enough talented running backs, and to get the best in the class is a premium that can’t be overlooked. While I do think there are other gifted backs like Javonte Williams or Travis Etienne, they are not in the same sphere as Harris. The fantasy value of Harris in dynasty leagues, barring injury, will only climb from 2021 and beyond.

In Superflex formats, Trevor Lawrence should be the first selection given the skill and positional scarcity of the format. At 1.02, Justin Fields and Trey Lance will grade blows but at the 1.04, Harris would be my selection before Zach Wilson.

Unlike QBs or even WRs at times, Harris and other RBs can have more dynasty value early in their fantasy careers

I brought this up when discussing Lawrence’s fantasy value, but even the best QB prospects can struggle out of the gates. There is a vast learning curve that can make even the most polished prospect have difficulty adjusting.

The same used to be the case for wide receivers, but we are starting to see a trend in recent years develop. It was the “third-year breakout” we looked for in dynasty. That is almost too late for the impatient fantasy crowd.

With players like Justin Jefferson popping up more and more, if you aren’t flashing in your rookie year, questions are raised immediately. However, several factors are out of their hands, with situations, schemes, and QB play being such large factors.

This is where the running back can take his value into his own hands a bit easier. Looking at running backs drafted since 2016, 32 ended their rookie season averaging 11.23 PPR points or more. Why the 11.23 points? That was the PPG mark of the RB24 (J.K. Dobbins) in 2020.

Just in last year’s class alone, we saw six backs finish inside the top 24 of fantasy standings, with two of those inside the top seven (Jonathan Taylor and James Robinson). When looking for the next Taylor or Robinson, the landing spot is critical.