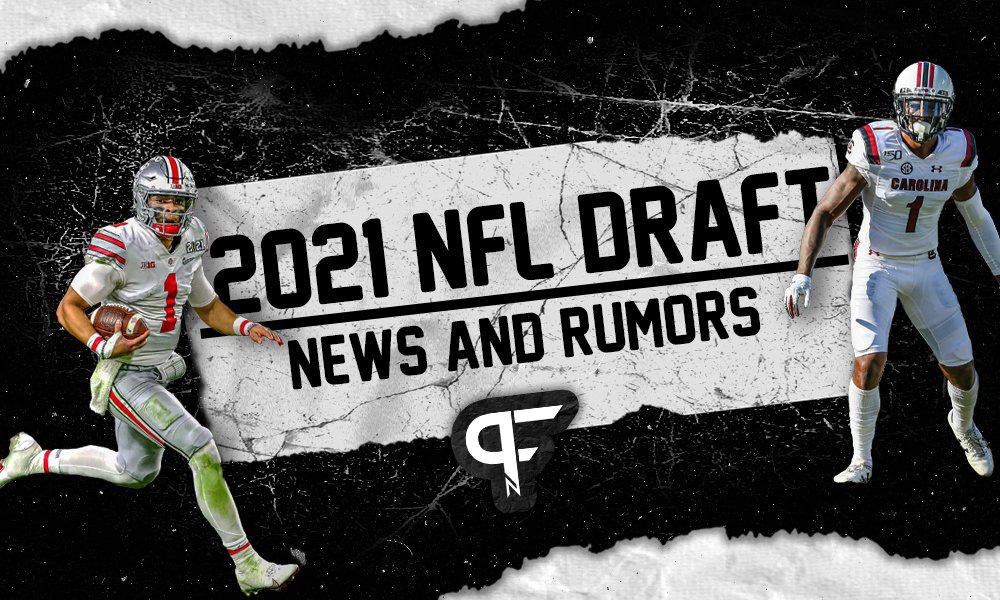 Monday, April 26: Latest rumors and buzz around the 2021 NFL Draft

(9:55 PM ET) Purdue linebacker Derrick Barnes, a personal favorite and someone I’ve covered in glory the past six months, is getting solid day two grades from NFL teams. Many teams have eight off the ball/space linebackers stamped as day two prospects, and Barnes fits in anywhere from the late second round to the late third round, depending on the team. Most like Barnes on the inside of a 3-4 alignment and feel he can play three downs to stack against the run, cover the pass, and even stand over tackle on pass rushing downs to chase the quarterback.

Could LSU linebacker Jabril Cox sneak into the back end of Round 2?

(4:05 PM ET) LSU was another school to hold a pro day today. This one was for linebacker Jabril Cox, who is receiving Day 2 grades around the league and could end up in the bottom part of Round 2.

Cox, who participated in the Senior Bowl but sat out the first LSU workout with a hamstring issue, timed between 4.54 to 4.62 seconds in the 40-yard dash, 7.12 seconds in the three-cone drill, and 4.42 seconds in the short shuttle. His vertical jump was 34 inches and broad jump reached 10’3″. Teams on hand included the Dallas Cowboys, Denver Broncos, Cleveland Browns, New York Jets, Miami Dolphins, Detroit Lions, and Washington Football Team.

Does Kyle Shanahan’s job security hinge on the 49ers’ pick at No. 3 being a success?

(2:40 PM ET) I first broke the news that it’s looking like Mac Jones or Trey Lance at No. 3 to the 49ers. A postscript to that story — during conversations with people through Saturday, I pointed out both quarterbacks are a risk that early in the draft. I followed up with the question: “If they take either Jones or Lance at No. 3 and they bust, does Shanahan lose his job?” The reaction from just about all was a resounding, “No! Shanahan is a lifer in San Francisco.”

And while I don’t believe people think Shanahan will be with San Francisco for life, the point was he has plenty of job security regardless of whichever quarterback he selects at No. 3 succeeds or fails.

2021 NFL Draft Rumors: Is Alim McNeill a Day 2 target for the Jacksonville Jaguars?

(2:40 PM ET) I tweeted out on Friday, North Carolina State was having a second pro day today, surmising gaining momentum for defensive tackle Alim McNeill. The pro day just finished and the object of attraction was in fact McNeill, who is getting solid third-round grades from teams.

The Jacksonville Jaguars were on hand for McNeill’s “pro day.” While some believe the Jaguars could take a defensive tackle with their second pick in the first round, I continue to hear it is more likely to be McNeill or Tommy Togiai of Ohio State in the third frame.

(1:20 PM ET) There’s been some chatter about Davis Mills ending up in the first round, and there’s no doubt the former Stanford quarterback is massively rising up boards. I’ve spoken highly about the Stanford quarterback the past few months and wrote at length on him after attending a pro-day-style workout he ran through at the Senior Bowl.

Several people tell me the chatter is the New England Patriots possibly selecting Mills in the first round, though it will be a late-first-round selection via a trade down from No. 15 or trade up from the second round. Mills checks all the boxes the Patriots are looking for at the position and he comes with terrific upside.

As previously reported, Washington and the Chicago Bears are also in the mix for Davis Mills. However, I cannot confirm either is willing to use a first-round pick for the passer.

How many wide receivers will come off the board in Round 1 — and who is the sleeper first-round WR?

So who are the six receivers graded as potential top-32 choices? The familiar names at the top include Ja’Marr Chase, DeVonta Smith, Jaylen Waddle, Rashod Bateman, and Kadarius Toney. The sleeper who could end up in the first round is Elijah Moore of Mississippi, as some teams even project him into the late teens/early twenties. Moore comes off a sensational season, which he capped off by timing in the low-to-mid 4.3s during his pro day workout.

What positions are the Jets targeting on the first two days of the NFL Draft?

(10:45 AM ET) It will come as a surprise to no one, but the New York Jets will look to address the cornerback and receiver positions early in the draft. From what’s coming out of Florham Park, the feeling is the Jets won’t use their second first-round pick on a cornerback, but rather wait until Day 2.

(10:45 AM ET) After the top two players, there could be some wild swings on tight end. Some teams have a late Day 3 grade on Brevin Jordan of Miami, as he’s not come across well in interviews, and many feel he’ll always be more athlete than football player.

Conversely, Tre’ McKitty has a lot of upward momentum, and teams like him a lot more than those on the outside. McKitty could end up in the third round. John Bates is another likely to be selected higher than most presently predict.

(10:45 AM ET) As first reported yesterday, and since corroborated by other outlets, the belief is the San Francisco 49ers are deciding between quarterbacks Mac Jones and Trey Lance with the third overall pick. In Jones, Kyle Shanahan would be getting the consummate field general. While in Lance, the Niners would be getting the more physically gifted quarterback who also processes information quickly and makes smart decisions. Whatever the 49ers end up doing, the belief is that Shanahan will get what he wants.

(10:45 AM ET) Considering the overall lack of depth in this draft, the UDFA market will be hot next Saturday once the seventh round is complete. Players not drafted are expected to be offered large signing bonuses and high amounts of “Paragraph 5” salary.

Off-the-record negotiations have already begun as a few teams have been telling players or their representatives, “We will offer you XYZ to sign with us after the draft if you are not selected.” Expect the top UDFAs to receive signing bonuses in the range of $50,000 and P5 money in excess of $100,000.

2019 draftee may get a new crack at a pro career

(10:45 AM ET) Remember Sutton Smith, the two-time All-American from Northern Illinois and former sixth-round pick of the Pittsburgh Steelers in 2019? Smith led the nation ins sacks (14) as a sophomore and tackles for loss (27) during his junior campaign. Woefully undersized for an NFL edge rusher, Smith spent time on four different practice squads in 2019 and was out of the league last year.

Smith is getting a second chance at life in the NFL but at a different position. Smith has transitioned to fullback, and his workout film has caught the eye of several teams who feel he could be a Kyle Juszczyk-type player.

League News: What ebbs and flows will the 2021 offseason have in store?

(10:45 AM ET) Besides this week’s draft, the biggest news story in league circles involves veterans returning — or not returning — to team facilities for offseason workouts. One by one, teams have made public announcements informing their respective franchises they intend on following the recommendation of the NFLPA and will not attend voluntary in-person workouts this offseason.

Several people, including player agents, have informed me this may not be the best course of action. And I was also told many of the younger players, some fighting for starting jobs this season, are struggling with the decision of whether or not to show up for workouts.

Several agents have recommended players return to team facilities for Phase 2 workouts beginning in the middle of May. While some players have bonus incentives to return to facilities for Phase 2, many player agents feel it’s in the best interest of their players to be in a controlled environment where team medical staffs can monitor them.

The other concerns center on players who work out by themselves, away from team facilities, getting injured then being placed on the NFI (non-football injury) list, potentially hurting them financially. There’s also the issue that certain teams and coaches want players to show their face around facilities.

What’s the perspective of the players about the looming offseason?

On the players’ behalf, many feel they get much more from individual workouts versus the group workout mentality. Many players have personal trainers who are in tune with their bodies and habits. They feel they get much more out of one-on-one workouts with personal trainers versus entering a team facility where one strength and conditioning coach is in charge of 90 people.

With offseason workouts being cut in half and many going virtual, the belief is workout bonuses will be a thing of the past. Players will want workout bonuses to be salary moving forward.