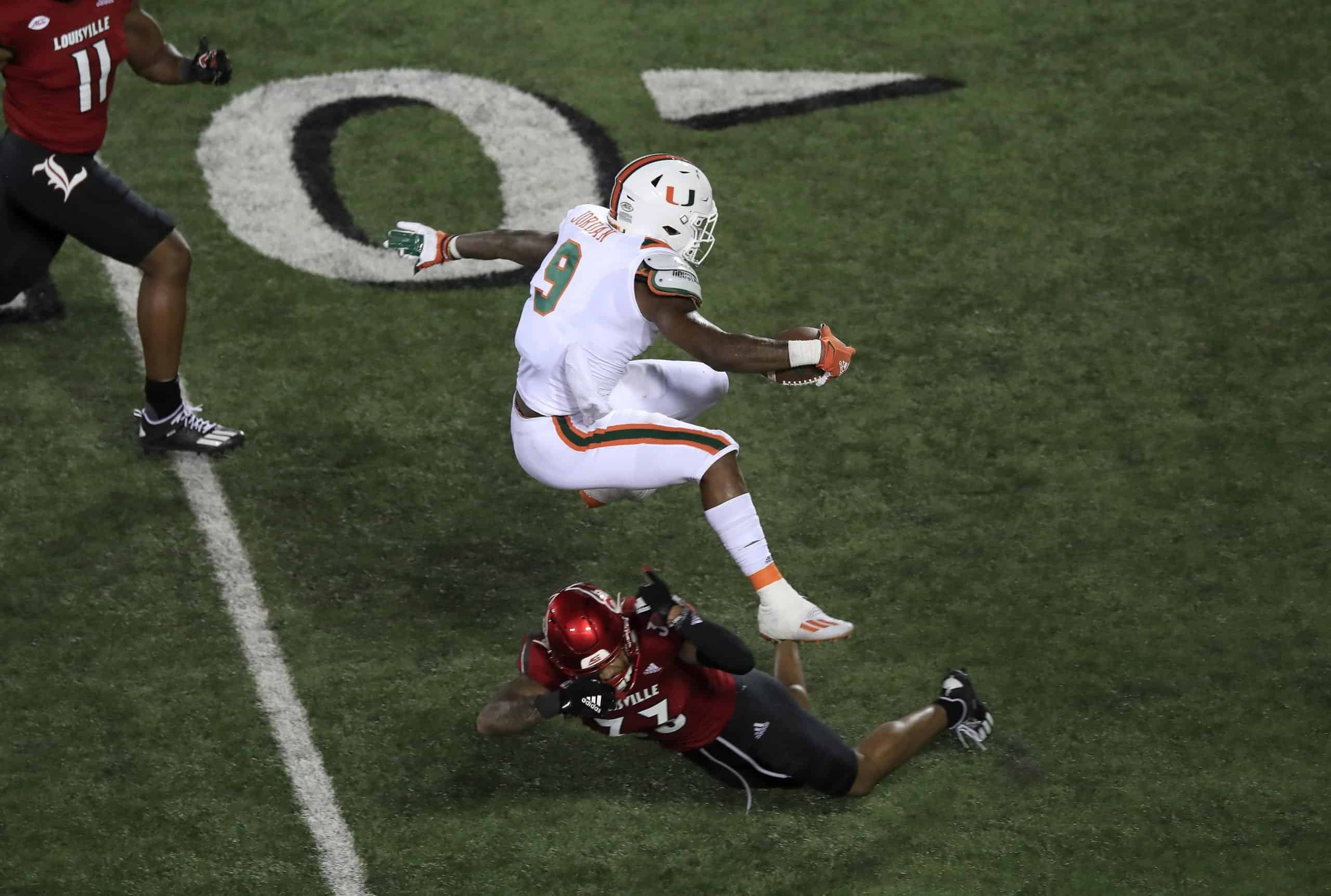 A historic program, the Miami Hurricanes may not have the talent of the early 2000s, but they have many future NFL players on the roster. Quincy Roche, Cam’ron Harris, and Jaelan Phillips are a few names that jump out. Meanwhile, Gregory Rousseau is a likely future first-round pick. However, Miami’s top NFL Draft prospect on the offensive side of the ball is tight end Brevin Jordan.

Jordan is the latest tight end in a string of talented players that have gone to the NFL. David Njoku, Chris Herndon, Jeremy Shockey, Bubba Franks, Greg Olsen, and Jimmy Graham are just some of the names that Miami has launched into the NFL in their history. Jordan finds himself in the driver’s seat to be the next highly touted and sought-after tight end from the “U.”

Positives: Incredibly athletic tight end who shows flashes of brilliance. Fluid releasing off the line of scrimmage, displays natural pass-catching skills, and works hard in all areas. Sturdy and takes a big hit yet keeps his feet and holds onto the throw. Nicely adjusts to the errant throw, makes the reception in stride, and displays soft hands.

Occasionally lines up in the slot and plays like a tall possession receiver. Snatches the ball out of the air with strong hands. Blocks with leverage and knee bend, has a nasty attitude, and works to finish off opponents. Possesses solid blocking strength.

Negatives: Not a sharp route runner. Does not consistently come away with difficult receptions.

Analysis: Jordan is an athletic pass-catching tight end who holds his own as a blocker and has shown consistent development in his game. Well-versed in all areas of the position, Jordan should only get better with time and can develop into a No. 1 tight end at the next level.

Starting for Bishop Gorman at tight end in Las Vegas, Nevada, Jordan found himself on a standout team that was consistently competing in the biggest spots that High School Football had to offer. During his entire high school career, Bishop Gorman went to the State Championship every single year.

It was a talented team and has been the cream of the crop for Nevada High School football. Jordan received playing time early on in his career as a Sophomore, where he racked up an impressive four touchdowns.

Over the next two seasons, Jordan would rack up over 1,500 receiving yards and 21 receiving touchdowns. In his senior season, Jordan put up 1,111 receiving yards and 13 touchdowns. A team captain that year, Jordan led Bishop Gorman to a State Championship where he put up nearly 100 total yards and a rushing touchdown. That same year, he received an invitation to the prestigious Under Armour All-America Game to compete with some of the nation’s best recruits.

A consensus four-star recruit and the top-rated tight end in the 2018 recruiting class, Jordan was sought after by most top programs around the country, including LSU, Florida, Alabama, Georgia, and more. Ultimately, Jordan went to “Tight End U” as he committed to Miami. Citing their longstanding tradition of producing tight end talent that was routinely selected in the NFL Draft, Brevin Jordan was on his way to South Beach.

Prior to his Freshman season, Jordan’s dad, Darrell Jordan, tragically passed away from a heart attack. A ninth-round pick by the Atlanta Falcons in 1990, Jordan’s father was a linebacker at Northern Arizona and played for Bishop Gorman in the 1980s. Jordan is someone who grew up around the game and has football bloodlines. His father even helped him pick Miami during his recruiting process.

As a freshman, Jordan stepped onto campus and immediately became the starter, starting 12 of 13 games in his Freshman year. Putting up 287 receiving yards and four touchdowns that year, Jordan earned Second-Team All-ACC honors as a Freshman. Against Florida State, Jordan caught a game-winning 41-yard touchdown that put him on the map of everyone watching. It was a promising Freshman year that brought intrigue. Jordan proved he was an athletic mismatch that teams would have to deal with.

In his sophomore season, Jordan rose to prominence as one of the best tight ends in college football. A fantastic season made him a Mackey Award Finalist and a First-Team All-ACC selection. In the first game of the season, Jordan put up 88 receiving yards and a touchdown on Florida. It was a game where Jordan proved his rare YAC ability for the tight end position, including breaking a tackle on his touchdown.

Multiple other solid performances dotted his resume this season, but his 136-yard explosion against Virginia Tech had been his best collegiate game up to this point. It was the perfect mesh of everything Jordan has as a prospect, including his vertical ability.

Saving the best until his last season

Despite battling a shoulder injury and the shortened 2020 college football season, Jordan put up career high numbers across the board. He finished the year with 7 touchdowns and 576 receiving yards, proving his big-play ability with 15.2 yards per reception. Whenever the connection between Jordan and new Miami quarterback D’Eriq King was clicking, so was the Miami offense.

Impressive pass-catching games and Louisville and North Carolina obviously catch the eye. However, Jordan’s contribution to the Miami offense extended beyond the receiving element of the tight end position. He demonstrated during 2020 that he is both a willing, and able, blocker.

Although he had one year of remaining eligibility, Miami tight end Brevin Jordan declared for the 2021 NFL Draft following the end of the season.

After his pro day, Brevin Jordan is comfortably a mid-to-late Day 2 selection at best, and he could slip into Round 4. He’s a better athlete on tape, and his speed testing was good. At the same time, Kyle Pitts and Pat Freiermuth are more hyper-prototypes in their respective lanes, and Jordan feels like he is simply behind them right now.

The good news for Jordan is this opens up the entire playbook for him. He gets to land in a great spot for his growth. The first landing spot that immediately jumps out of the screen is the Pittsburgh Steelers. They have a hole at tight end, and should Jordan be there in the third round, he would be the best player available.

In a similar vein to how the Steelers have used Eric Ebron, Jordan would move around the offensive formation and get YAC opportunities in the flats. The key here is that he is a willing blocker, and the Steelers love that work ethic to get better.

What other teams fit Jordan’s style?

Moving on from that, Jordan’s fit with the Baltimore Ravens is an intriguing one. Despite having two capable tight ends, the Ravens have proven to be especially dangerous out of 12 personnel. They featured Mark Andrews and Hayden Hurst in 2019. However, Jordan has the athleticism that Hurst did not possess and could open up opportunities and visions for this offense that are not possible right now in 2020.

Besides those fits, other intriguing spots are the Arizona Cardinals, New Orleans Saints, Carolina Panthers, and Los Angeles Chargers. While all of these teams do not necessarily have the tight end position at the top of their wish list, you can see the possibilities that another tight end could add to the offense.

Particularly in the vertical aspect of these offenses, Jordan would thrive in so many ways.