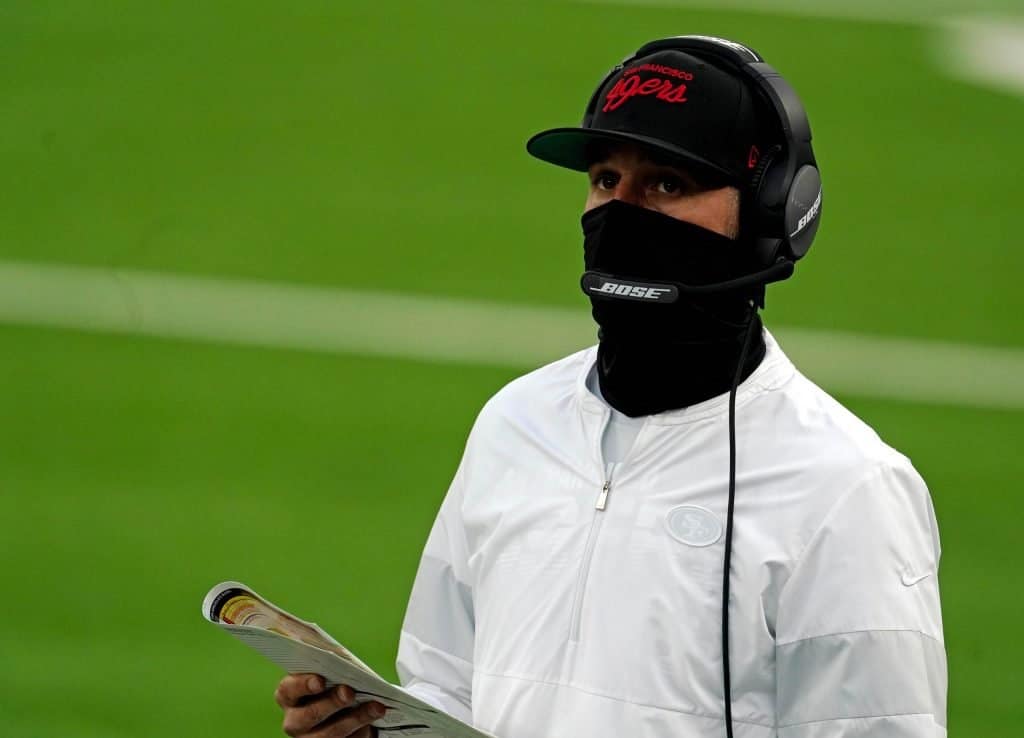 Nov 29, 2020; Inglewood, California, USA; San Francisco 49ers head coach Kyle Shanahan looks on from the sideline during the first half against the Los Angeles Rams at SoFi Stadium. Mandatory Credit: Kirby Lee-USA TODAY Sports
What's in this article? Click to show
Kyle Shanahan driving the 49ers’ process
Are Mac Jones and Trey Lance the names in the frame for Shanahan and the 49ers?
Kyle gets what Kyle wants
Want more 2021 NFL Draft prospect news? Want to do your own mock draft?

With the first two selections of the 2021 NFL Draft seemingly known, what are Kyle Shanahan and the San Francisco 49ers planning with the third overall selection? Here is the latest news and rumors I am hearing from around the 2021 NFL Draft and the 49ers’ potential decision. Is Ohio State’s Justin Fields, Alabama’s Mac Jones, or NDSU’s Trey Lance the leader in the clubhouse for San Francisco?

This was a theme pointed out to me time and time again last week. When the coach drives the draft process and the decision-making process during the draft, the results are usually a lot different than a general manager leaning on his scouting department and then running things past the head coach.

Bill Parcells’ battles with Robert Kraft and his “If they want you to cook the dinner, at least they ought to let you shop for some of the groceries” comment brought this idea mainstream. Mike Ditka trading away the New Orleans Saints’ entire draft in 1999 to move up and select Ricky Williams made the idea a reality. This is the current situation in San Francisco, a franchise that traded away two future first-round picks to move up nine spots in the draft.

The coach, Shanahan, is driving the draft process. And as we see, he will get his quarterback no matter the price. The Rams did it twice — first for Jared Goff and then Matthew Stafford, yet the former did not work out as planned.

Are Mac Jones and Trey Lance the names in the frame for Shanahan and the 49ers?

“Processing information” has been the buzz term of the 2021 NFL Draft and one that does not sit well with some. Shanahan became frustrated with the inability of Jimmy Garoppolo to process what he was seeing on the field and his inability to decipher or read the field. Hence, it was time to move on and find a new signal-caller with the ability to do just that — process information — to the liking of Shanahan. But which quarterback available with the third pick would Shanahan prefer?

In conversations with people in the know, the same two names pop up time and time again: Mac Jones and Trey Lance.

In Jones, Shanahan is getting the consummate field general — someone who sees the battle before the opponent comes into view. Jones’ command and leadership of his offense in 2020 were second to none compared to the top quarterbacks in this year’s draft. His accuracy and pass placement was spot on all year. And while he had great talent around him, Jones never flinched.

Jones then made the seamless transition to Senior Bowl practices, displaying the same leadership skills and accuracy over three days while playing with pass catchers who were complete strangers for the most part.

However, for all his great intangibles and mental acumen, Jones falls short of the other top signal-callers in areas of arm strength, athleticism, and mobility.

Lance is another who did a great job processing information on the field and making proper decisions, albeit in 2019. He’s an intelligent quarterback who acquits himself well in interviews. And the truth is, his size, athleticism, and arm strength are light years ahead of Jones’.

Nonetheless, Lance has a very slim body of work with just one full season of starting experience at the FCS level. And though Jones has only slightly more starting experience than Lance after stepping in three-quarters of the way through the 2019 campaign after Tua Tagovailoa’s dreadful hip injury, the Alabama quarterback had the benefit of playing in the top conference in the country.

Kyle gets what Kyle wants

This is what was told to me hours after the 49ers traded for the third selection of the draft, after Zach Wilson had completed his drills at the BYU Pro Day workout. At the same time, people told me then that the pick would be Lance, and that San Francisco would keep Garoppolo for another season. We’ll see.

Yet, an important question remains. Would a team trade away tons of draft capital to move up and select, A) a quarterback (Jones) who is physically deficient compared to the top of the board at the position or B) a signal-caller in Lance you may need to redshirt for most if not all of 2021? It seems this is the case for the 49ers.

Kyle gets what Kyle wants. And it seems Kyle knows what he wants, but he’s not telling anybody — yet.