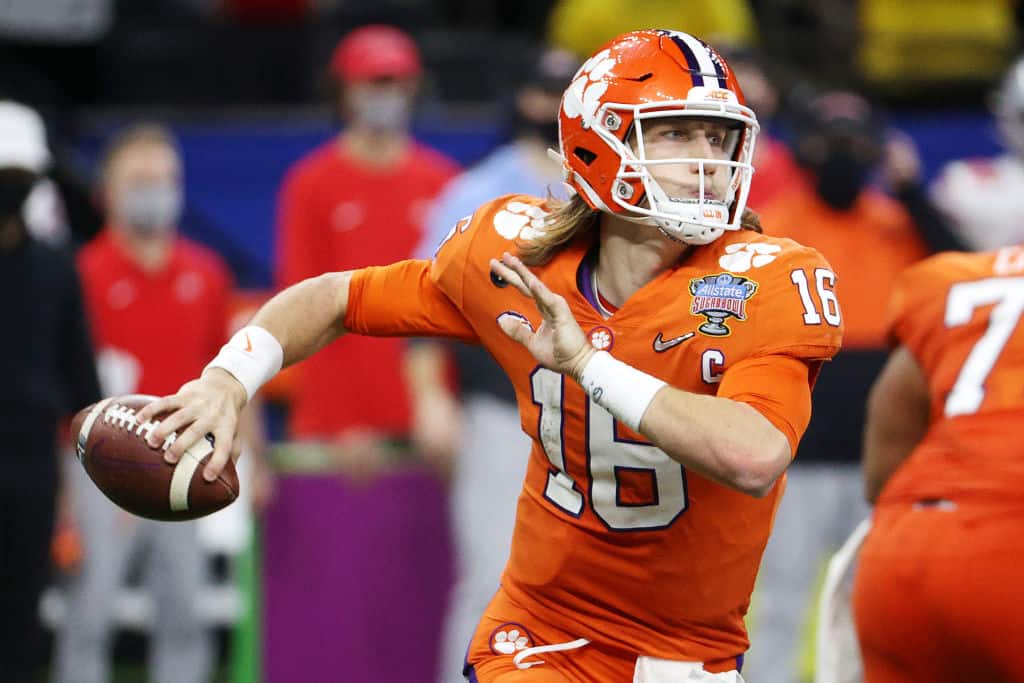 NEW ORLEANS, LOUISIANA - JANUARY 01: Trevor Lawrence #16 of the Clemson Tigers looks to pass in the second half against the Ohio State Buckeyes during the College Football Playoff semifinal game at the Allstate Sugar Bowl at Mercedes-Benz Superdome on January 01, 2021 in New Orleans, Louisiana. (Photo by Chris Graythen/Getty Images)
What's in this article? Click to show
Trevor Lawrence dynasty value for 2021
Where should you draft Lawrence in dynasty rookie drafts?
Drafting rookie QBs is an exercise in patience for dynasty if history has taught us anything
Want more fantasy football analysis and news?

Even before he set foot on Clemson’s campus, Trevor Lawrence appeared destined to be a big part of dynasty rosters in 2021 as well as the wider fantasy football landscape. How should you value Lawrence when it comes to your rookie draft in dynasty leagues this offseason?

When it comes to how a player is valued, it comes down to the person most of the time. You and I could have totally different values on a player in dynasty, given the format’s long-term nature. I am sure you have noticed this when attempting to make trades. The two parties can be so far off that you know there’s no middle ground within a few messages.

There are several factors at play when this happens. On-field performance with consistency is one. Believing in a player’s ability is another example — so does being labeled a generational talent by every pundit who can get a mic in front of them for the last three seasons. This is the world we find ourselves in when it comes to the dynasty value in 2021 of Clemson QB Trevor Lawrence.

Lawrence has been labeled as everything from a “can’t miss” prospect to a “generational talent” to the “best QB prospect since Andrew Luck and Peyton Manning.” And it’s apparent in his value.

If you want to land Lawrence on your dynasty roster somehow, you either need to make a massive trade or hope your fantasy team was terrible last year. He won’t stick around long on draft day.

Where should you draft Lawrence in dynasty rookie drafts?

Lawrence is officially a Jacksonville Jaguar and joins the ranks of number one overall picks. He will be the first QB off the boards in dynasty drafts as well. Even though they have the first overall pick, the Jaguars are on a team on the rise under Urban Meyer. The defense is quickly on the rise and D.J. Chark, Marvin Jones, and Laviska Shenault Jr. are more than capable.

If you are in a Superflex league, he is also the de facto 1.01. Without ever playing a snap or stepping onto a field, acquiring the pick in your fantasy draft to select him or trading for Lawrence himself is costing the same as it did for Joe Burrow, if not a spot higher. Anything in the QB7-9 range in dynasty startups is the approximate value of Lawrence in fantasy leagues.

In a 1QB league, things are a bit trickier. Unless you have a glaring need at a position, I tend to lean on BPA (best player available) drafting. In a recent 1QB mock draft, I had Lawrence going off the board at pick 13. Anywhere in the latter end of the first round is an excellent and solid value for Lawrence.

In 1QB leagues, I feel we tend to undervalue QBs more than we should. We’ve all seen the value an elite quarterback brings to a dynasty roster.

Taking the starting QB role over mid-season as a freshman, Lawrence led Clemson to a national championship and instantly became the darling of the devy fantasy football community. Fast forward two more years and nothing has slowed down his ascent.

Lawrence ended his career at Clemson with a 34-2 (.944) record as a starter. His two losses both came in the College Football Playoffs. In fact, Lawrence did not lose a regular season game as a starter in either college or high school.

He has the arm talent to make any throw. Not only does Lawrence have precision and deep ball accuracy, but he can also run through multiple progressions with the scrambling ability to get out of trouble. Any dynasty team in 2021 with a chance to add Lawrence to their team instantly raises the value of their fantasy roster.

Playing the quarterback position in the NFL might be the most challenging thing you can do in sports. Everything from learning how to be a professional, getting to know teammates and a new playbook, to performing against the best in the world all has to happen at breakneck speed.

There is a learning curve, and no player is immune from a potential disappointing rookie season — not even Lawrence if history has anything to say.

Lawrence is almost a lock to go with the first overall pick, and with that comes expectations. It also gives us context with other QBs who went first in their drafts and their following seasons.

Not every QB is Justin Herbert and lights the world on fire out of the gates. In fact, history says that QBs struggle in year one.

Since 2010, eight quarterbacks have been selected with the first overall pick. Of those eight quarterbacks, only three finished their rookie season inside the top 12 in fantasy points. Those players were Kyler Murray in 2019 (QB8), Andrew Luck in 2012 (QB9), and Cam Newton in 2010 (QB3).

On average, number one overall QBs have finished their rookie season as QB16. Context is needed, as Joe Burrow and his injury-shortened season does bring this number down.

Of those eight QBs, only Sam Bradford and Baker Mayfield failed to have a better sophomore season. We have to remember, these elite prospects are going to the worst team in the NFL for a reason. They have more holes on their roster than just the quarterback.

If Lawrence does not struggle in year one, it will only help push his fantasy value to the moon in 2021 and beyond. Even if there are a few bumps along the way, that’s to be expected, and history says it is likely. Just don’t panic and sell him off after his first interception.

Lawrence is an incredible talent and one who can anchor your dynasty team for the next 10 years. Invest early and reap the benefits down the road.

In this article:Clemson Tigers, Trevor Lawrence