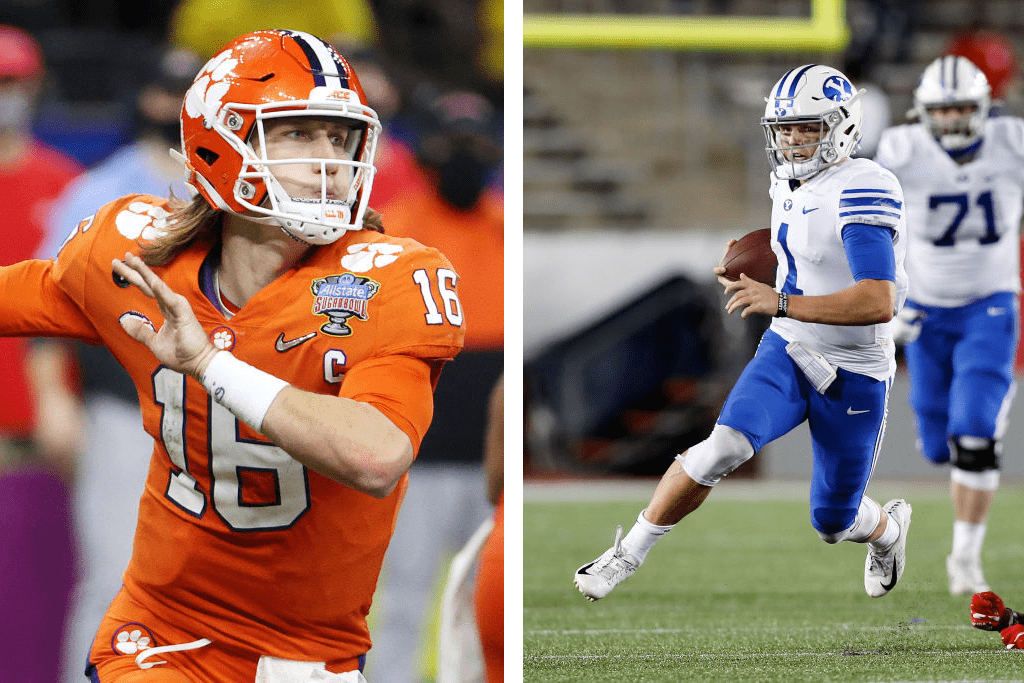 What's in this article? Click to show
Zach Wilson mania reaches its peak
Making a case for Zach Wilson as QB1
Why Trevor Lawrence has Teflon draft stock
Bottom Line: Lawrence was, is, and always will be QB1
Want more 2021 NFL Draft prospect news? Want to do your own mock draft?

We’ve officially reached silly season. A few weeks ago, I wrote a piece pitting Justin Fields against Zach Wilson in the battle for QB2 in the 2021 NFL Draft QB class. Imagine my surprise when reports surfaced this week that Trevor Lawrence is not universally seen as the top overall quarterback in the class.

Since his National Championship season as a freshman, the Clemson quarterback has been the first pick in the 2021 NFL Draft. That narrative didn’t jump on top of the fence and teeter toward “greener grass” until just now.

Crazy things happen when the 2021 QB class is so good. Optimum Scouting President Eric Galko tweeted that multiple teams see Zach Wilson above Trevor Lawrence and that he himself leans Wilson, which is something we haven’t heard from many in the business of player evaluation.

However, Pro Football Network Insider Tony Pauline isn’t convinced: “I also don’t believe that there is any team out there that has Zach Wilson graded ahead of Trevor Lawrence.”

We saw the same thing happen during the 2012 NFL Draft cycle. Andrew Luck was the clear-cut choice for the top pick to the Indianapolis Colts. However, Robert Griffin III was incredibly exciting. He could move about the pocket, make incredible throws and make plays on the ground with his legs in a high-powered Baylor passing attack.

With 2021 being an anagram of 2012, it’s only right and fair that we repeat the process from NFL Drafts of the past. Lawrence is Luck, and Wilson is RGIII. This is why we still cannot have nice things.

Making a case for Zach Wilson as QB1

It does us no good to disparage or discredit Wilson’s abilities. That is not what this conversation is about. It’s important to see the discussion from both sides of the coin. What does Wilson excel at over Lawrence? How has Wilson’s draft stock risen to the point it compares with a once-coined generational QB prospect?

It is undeniable. Wilson possesses effortless arm talent. No one else in the 2021 QB class makes throws out of structure like Wilson. He’s particularly adept at pushing the ball downfield and rolling to his left and right. The flashes of ball placement in some of these instances boggles the mind. He makes low-percentage throws look routine, given how often he flashes unbelievable ball placement.

He’s consistently able to leverage passes away from draping defenders, and his receivers at BYU were outstanding in contested situations. It was a match made in heaven.

But this isn’t just about the WOW throws. Wilson may very well be more generally accurate as a passer than Lawrence, particularly when their bases are compromised. Again, it comes back to the natural arm talent. Although Lawrence can sling it while scrambling or retreating, it takes more energy and overall movement to get through his motion compared to Wilson, who can use all arm to make throws.

Since winning the National Championship as a freshman, there hasn’t been a time that Lawrence has been anything but the consensus top draft prospect for 2021. Wilson isn’t changing that. Lawrence will be a Jacksonville Jaguar, and Wilson can battle to be the second QB drafted.

Yet, what makes Lawrence such an admirable draft prospect? Zach Wilson and Trey Lance arguably have better arms. Justin Fields, Lance, and Lawrence can all scoot. Clemson’s passing attack is fairly dumbed down overall, as it is at North Dakota State and BYU (although different stylistically). So what makes him so transcendent?

Lawrence has the complete package

Individually, there are things that each quarterback prospect does better than Lawrence. But none of them place their eggs into the basket without a few being cracked. Trevor Lawrence can.

Others may have ceilings as high as Lawrence, but his floor is so close to most rooves that it’d be irresponsible for anyone else to be the first overall pick. At the end of the day, the NFL Draft has as much to do with risk mitigation as pure talent acquisition. It’s one reason why Fields is my personal QB2 and why Lance is my QB4.

His ability to create and not simply take what’s given is unlike anything we’ve ever seen. It’s like watching Barry Sanders. Nobody else before or since has been able to be so outrageously productive playing a game nobody else can. I find it unlikely others can mimic Mahomes’ success.

We couldn’t get through this piece without comparing arm strength in the 2021 QB class. When I talk about Wilson’s arm, we’re talking about some special, special ability to make throws from adverse situations. He’s not alone there. Lawrence is reminiscent of Steph Curry on the football field. He also plays a different game.

There’s a finesse element to the way Lawrence works at times that I can’t remember seeing work before. His vision, although deployed differently from Mahomes, is similarly outstanding. He’s outstanding at timing and placement of changeup throws across the field and high-arcing deep passes thrown against pressure.

Zach Wilson isn’t the only one that makes incredible throws from weird positions. Lawrence can fade away and throw a dime down the sideline or a dart on a deep crosser, despite pressure bearing down. His accuracy throwing while rolling left is consistent. He moves and throws from collapsing pockets without transferring his weight to his front foot, all while remaining accurate.

Things look exactly how they should when he’s kept clean. There are no ghosts in the pocket forcing him from his spot. He can throw an intermediate out route from the far hash as well as anybody else, with clean placement, good timing, and outstanding pace.

His running ability is the difference-maker

This was what was most confusing about the report on teams preferring Wilson over Lawrence. The anonymous college scouting director said what Wilson does as a runner and thrower is exactly where the league is right now. I can only assume he knows Lawrence is going first overall and hasn’t bothered to watch him ever play football. For some reason, his running ability doesn’t get the shine it deserves.

There is an effortless nature to the way he moves. His ability to set defenders up and then make them miss is underrated. His stride length makes him a nightmare to catch in the open field. He only ran in high-leverage situations. Lawrence carried the ball 10-plus times on only six occasions at Clemson. Four of those instances were in the past two seasons’ playoff matchups.

Bottom Line: Lawrence was, is, and always will be QB1

Silly season, and in current times, boredom, will bring about the questioning of our processes. I believe that is the correct way to go about it as well. We must put our priors to the test. It is what gives us more confidence in the results.

Trevor Lawrence is not perfect, but he’s as clean a prospect as you’ll find at quarterback. People love player comps. Think about what we all thought Justin Herbert could be in college, but we never really saw the progression. Lawrence is the reality of that progress. Herbert looked pretty darn good as a rookie. Expect the same from 2021’s QB1.

Zach Wilson is a great prospect in an outstanding 2021 QB class, and there is no telling who will be the best of these quarterbacks until their careers have played out. But as prospects, it’s hard to argue for anybody other than Lawrence.