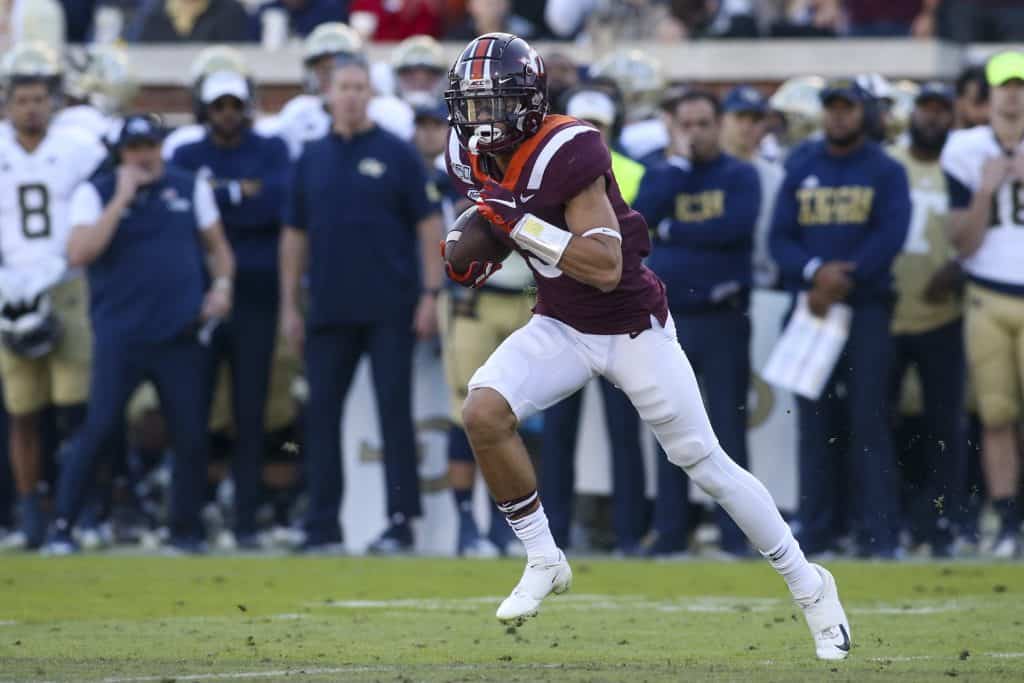 We’re closer to April now than February, so the mock drafts are coming in hot and heavy. Most mock drafts are either made to predict what will happen or show different situations that could occur late in April. However, for this 2-round 2021 NFL Mock Draft, I’ll go pick-by-pick drafting who I would personally take in each situation. I’ll explain why I take each throughout Round 1 of the 2021 NFL Draft and the trade logic that goes with them.

There’s no explanation necessary for this one. Don’t let anybody tell you there is. Trevor Lawrence will be the first overall pick.

Justin Fields is my personal QB2, and I believe the “flaws” usually associated with him are far overblown. He runs like the wind, is built as sturdily as they come at around 6-foot-3, 230 pounds, and has an NFL-ready arm. The offense he operated at Ohio State is more complicated than that of any of the other top four (or five) quarterbacks you’ll read about in this 2-round 2021 NFL Mock Draft.

If you were to build a modern NFL QB in a lab, they would probably look like Fields. Oh, and through charting exercises conducted by some of the most well-respected quarterback evaluators in media, he also was the most accurate of any.

This decision was not easy. However, when we think about the draft, risk mitigation is as important as anything else. Although Trey Lance is similarly talented to Justin Fields from a height/weight/speed and arm talent perspective, he’s inexperienced and played at a lower level of competition.

Zach Wilson‘s arm generates effortless velocity and distance, and some of his flashes of ball placement boggle the mind. The 50/50 ball receivers at BYU were a great canvas to display that freaky feel. But other worries left me feeling differently than most when it comes to the second-best quarterback in the draft class.

The 49ers weren’t the only team looking to move up for the 2020 FCS National Championship-winning quarterback. However, the trade compensation from San Francisco gave the Falcons more eventual darts for the draft dartboard. Because of  Matt Ryan’s expensive contract, there was no other way.

This fit is perfect for Trey Lance, who comes from a run and play-action-heavy scheme at NDSU. Lance might have more upside than any of the quarterbacks in this class given his physical profile, but his ideal situation allowed for clean and easy looks often. With less than 20 games of college football experience, going to Kyle Shanahan and having the opportunity to sit behind Jimmy Garoppolo is another ideal situation for this young man.

This is another selection that is not worth a conversation. The most important thing you can do as a football team is to protect your young quarterback at all costs. And Penei Sewell was dominating Pac-12 competition as a 17-year-old. He’s the best tackle in the class. Fin.

I do not care that they drafted Jalen Reagor. Figure out a way to use both. Julio Jones, DeAndre Hopkins, and Davante Adams might be “better” receivers than Tyreek Hill, but nobody in the NFL strikes fear in the hearts of defensive coordinators like Hill can. Many Hill comps are thrown out there, but this is the only one that is actually real.

He’s the perfect combination of his former teammates Jerry Jeudy and Henry Ruggs. He possesses the long speed of Ruggs with the ability to change direction of Jeudy. Although there is sharpening still to come in his route running, he’s already nearly uncoverable. There’s a chance Jaylen Waddle becomes the most dangerous weapon in the entire league. That’s worth being the first skill-position player drafted.

It seems the shine on DeVonta Smith has waned just a bit in the past few months since his Heisman Trophy-winning campaign. Still, even if you have Ja’Marr Chase rated higher than Smith (I do not), you must also account for fit. If Matthew Stafford still dropped back for the Lions, Chase would be a better fit.

On the other hand, with Jared Goff at the helm, getting a player that more consistently separates is a better avenue. There is a bit of Robert Woods in his game, as he’s able to wiggle his leaner frame in and out of breaks to separate consistently. He also elevates and finishes catches at an unbelievable rate.

However, let’s just say in 2022, the Lions decide to draft a rookie quarterback. Having a better route runner who creates more space between himself and a defender makes that young quarterback more comfortable, so this fit works for the future, too.

Remember, this is what I would do. Personally, I believe Christian Darrisaw is the second-best offensive tackle in this class. He’s athletic, mean on the edge, and can fit in any run scheme Miami would employ. His explosiveness out of the stance is outstanding. Additionally, his ability to play on an island is ideal for the Dolphins because they can then help Tua Tagovailoa’s blind side at right tackle.

Of all Denver’s needs, cornerback is the only one that fits in this 2-round 2021 NFL Mock Draft. Caleb Farley is a riskier pick than the others, given his injury history and 2020 opt-out, but his talent is unquestionable.

He possesses outstanding fluidity and explosiveness for his size, and his ball skills are unmatched at the top of this class. When playing off the ball, his click-and-close matched with his length makes the catch point consistently crowded. He’s a scheme-versatile cornerback with nearly unlimited upside. Just don’t expect him to hit like Sean Taylor.

Protect your most important asset. Protect the blind side of your second-year quarterback. Rashawn Slater‘s steady play style is perfect for a plug-and-play starting offensive tackle.

His “lack of length” was never an issue against college competition, and his technical prowess is evidence it won’t be an issue at the NFL level either. If not for a few reps getting beaten up the arc by Wisconsin’s Zack Baun, creating just a small seed of doubt, he’d be right up there with Darrisaw as OT2. All three of the top tackles are incredible players.

The other day a tweet caught my eye. Landon McCool of the Locked On Cowboys podcast tweeted, “Kyle Pitts is what ‘Randy Moss’s son playing TE’ should actually look like…” I have to agree. It’s tough to properly place Pitts with a team in this 2-round 2021 NFL Mock Draft because not many teams need a tight end.

However, he possesses endless length, is much more sudden than he should be for a 6-foot-6 athlete, and will compete for the title of “slant god” within two years of turning pro. That is if Jason Garrett can figure out how to deploy offensive talent in New York properly.

He couldn’t fall any further. Russell Gage, Calvin Ridley, and Julio Jones are obviously a great combination. Nevertheless, this Atlanta team will not compete in 2021. Therefore, they go best player available here, which puts Ja’Marr Chase with a veteran quarterback that can maximize his skill set.

Chase is as physical a receiver as they come. His ability in contested-catch situations is unrivaled in this class, and it’s difficult to remember a prospect that was better at boxing out defenders and catching passes leveraged away from trouble (and his frame).

Related | Ja’Marr Chase Dynasty Value: Where to draft him in 2021 rookie dynasty drafts?

He falls as the fourth weapon in this class because he hasn’t displayed a consistent ability to separate as a route runner. Playing in 2020 could have alleviated those “concerns,” but he chose to opt out of the season. Atlanta builds for the eventual departure of Jones and Ryan.

This young man is a dog. The Cowboys obviously need secondary help early and often in any simulation, and this 2-round 2021 NFL Mock Draft is no different. Jaycee Horn is an athletic, physical, and long cornerback whose best fit (and most of his college tape) is in press man.

The Cowboys will run a high percentage of Cover 3. With the addition of defensive coordinator Dan Quinn, that means a lot of Cover 1 as well. That’s perfect for Horn. As long as he can mitigate concerns over his propensity to grab onto the opposing receiver’s hip in transition, he could become one of the biggest menaces in the league at the position.

Forget everything I said earlier about mitigating risk in the draft. The Vikings NEED talent on the defensive side of the ball, and especially in the pass rush. Jaelan Phillips‘ injury history is well documented, but his play has become the same in recent months as well.

He is the best blend of size, athleticism, and technique in this class. Typically, that’s a pretty good combination for a pass rusher. He can do a little bit of everything, including drop into coverage. Still, in Mike Zimmer’s defensive scheme, where he’ll be able to pin his ears back, set the edge, and attack the quarterback as a traditional defensive end, Aaron Rodgers might start throwing the ball away more again in 2021.

I know Bill won’t do this, but I am not Bill (he’s much smarter, and I’m much more handsome). Rashod Bateman has been largely ignored in this draft class, but there is a better discussion to be had about him being a top-three receiver in this class than being WR5, in my opinion.

His fluidity at 6-foot-2, 210 pounds, makes for easy transitions in and out of his routes, which creates consistent separation. His double moves are silky smooth, and he’s always been a better athlete than given credit for (until his pro day numbers dropped).

The Patriots have 75 receivers and tight ends on the roster now, but Bateman immediately becomes the group’s alpha target.

Patrick Surtain II is boring. There are few compliments higher than boring for a cornerback. It’s not surprising this young man was built to play the position given his father’s career in the secondary.

Although technique and film study can get a player far, they must still possess the physical and mental capacity to execute. Surtain brings a level of intellect to the position that I’m not sure I’ve seen matched to this point.

In an endlessly difficult defensive scheme at Alabama, he was always in the right place at the right time in the right uniform. That’s an old army adage about being a good soldier. His only hiccups at times have been with the ball in the air downfield. He’s become lost in the sauce a few times, attempting to locate the ball in the air. That is the only thing keeping him from going higher in this class.