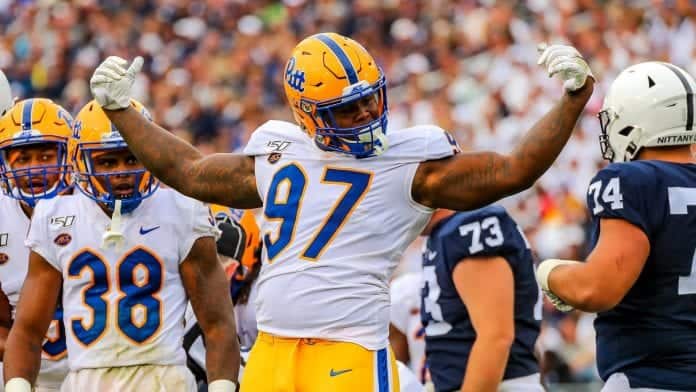 The Pitt Panthers have many intriguing 2021 Draft prospects. Can this group help the Panthers return to the first round for the first time since 2014? Pro Football Network draft analyst Neal Driscoll breaks it down.

One of a college football coach’s biggest pitches to top high school prospects is that the program will provide the ability to play at the next level. For Pittsburgh Panthers’ head coach Pat Narduzzi, it has been a challenge to sell this, considering the team has not been well represented in the NFL Draft for quite some time.

In fact, the Panthers haven’t produced a first-round pick since the 2014 draft, where the NFL’s best defensive player, Aaron Donald, was selected by the St. Louis Rams at 13th overall. While recent draft history hasn’t displayed the Pittsburgh football program as a factory for producing top NFL talent, they have an intriguing group of 2021 Draft prospects, including a pair of potential first-round selections.

At first glance, the Panthers have a roster littered with 2021 NFL Draft talent. Before we take a look at Pitt’s top targets, we would be remiss to ignore the team’s mid-level prospects. This group contains center Jimmy Morrissey, quarterback Kenny Pickett, safety Damar Hamlin, and defensive linemen Rashad Weaver and Keyshon Camp. These are all legitimate fifth-to-seventh round prospects in the 2021 NFL Draft, who could help themselves with strong 2020 seasons. With that said, the Pitt Panthers have three 2021 Draft prospects that will almost certainly be top-64 selections next April.

Jaylen Twyman is, in my opinion, the best Panthers 2021 draft prospect. Early in draft season, Twyman is drawing comparisons to former Pitt great Aaron Donald and is already challenging Donald’s impressive sack production. After getting minimal playing time in 2018, Twyman busted onto the scene in 2019, producing 41 tackles, 12 tackles for loss, and an astonishing 10.5 sacks. He finished third in the ACC with sacks, only behind Miami’s Gregory Rousseau and Wake Forest’s Carlos Basham Jr., which lead to him being named first-team All-ACC.

Twyman explodes off the football, firing out of his stance while maintaining an effective pad level, and he plays the game with violent hands. Given his size, he possesses exceptional athleticism and the versatility to play multiple positions along the defensive front. His best trait is his ability to create an interior pass-rush, as his mind-blowing sack production would indicate.

The toughest competition that Twyman faced in 2019 was a Week 3 showdown with Penn State. In this game, Twyman was the best player on the field for the Panthers, as he constantly disrupted the line of scrimmage and secured 1.5 sacks. In the clip below, you will see Twyman’s elite hand usage as he easily discards the Penn State center and chases down quarterback Sean Clifford for a sack.

Pitt IDL Jaylen Twyman is legit. His hands are really, really good. This is a really nice swim move to get this sack here on Clifford. He has the potential to be a 1st round pick in the 2021 draft. pic.twitter.com/Gum3it5ted

While Jaylen Twyman needs to add some weight to his frame, which will allow him to stand up against the run more consistently, he is a bonafide top-20 2021 NFL Draft prospect. He has a bright future at the next level as a “3-tech”, due to his magnificent athleticism and ability to constantly provide an interior pass-rush. If Twyman can repeat his 2019 production, his 2021 draft prospects will ascend in a big way.

Related: Why Jaylen Twyman can be the next great Pitt defensive lineman

While his teammate Twyman’s 10.5 sacks were third-best in the ACC in 2019, Patrick Jones II wasn’t far behind, as he finished fourth with 8.5 sacks. His impressive 2019 campaign goes beyond his sack production, as he accumulated 43 tackles, 11.5 tackles for loss, a staggering 4 forced fumbles, and 18 quarterback hurries. His impressive play in 2019 led him to be awarded second-team All-ACC honors.

Pro Football Network’s Matt Valdovinos is a big fan of Jones II, even dubbing him the best pass-rushing draft prospect heading into the 2020 season. Valdovinos points out in his 2021 NFL Draft edge rusher rankings: “Patrick Jones’ blend of elite burst, length, and bend makes him an easy prospect to fall in love with.”

Jones II’s size, explosive first step, and speed off the edge give him the ingredients to be a highly sought-after 2021 pass-rush prospect. Other traits that he possesses include great length, a splendid motor, and an arsenal of pass-rush moves. Jones II is not a one-trick pony, either; in addition to his effectiveness as a pass-rusher, he is stout against the run and can set the edge on a consistent basis.

The clip below will highlight Jones’ quick first step and his ability bend around the edge with ease. Jones II, a true technician, is very polished and smooth when it comes to his pass-rushing brilliance.

Pitt EDGE Patrick Jones is a fun player to watch. Coming off a season where he had 8.5 sacks, it’s not hard to see why. He’s a savvy player with a solid first step. When it comes down to it, he’s good at running a tight arc. He’s one of the best pass rushers in the ACC this year. pic.twitter.com/Tc0k9wO9cv

Heading into the 2020 college football season, Jones II is a sound second-round prospect, but his draft stock could explode with a strong season. He has the size and traits that scream first-round talent, and if he can showcase that ability at a high level in 2020, he could elevate himself into the first-round conversation.

In 2019, Pitt’s Paris Ford emerged as one of the top safeties in college football, as he filled the stat sheet with 97 tackles, 11 passes defended, 3 forced fumbles, 3 interceptions, and a defensive touchdown. Like his heralded teammate Twyman, Ford earned first-team All-ACC honors.

When you watch tape on Ford, the first thing you notice is that he is a ferocious hitter. He brings a physical brand of football to the table and plays with unparalleled urgency. He proves to be an enforcer against the run, as you constantly see the #12 jersey around the football, securing tackles in the box.

The clip below provides an example of Ford’s ability to lay the lumber.

Ford isn’t only a hard-hitting safety; he also possesses sensational closing speed, excellence at taking angles, strong coverage skills, and overall playmaking ability. He flirted with the idea of declaring for the 2020 NFL Draft but ultimately decided to return to Pitt. He only has one season as a full-time starter under his belt, so the decision to return was wise. If he can play at the level he played at in 2019 again this season, Ford’s 2021 draft stock will skyrocket.