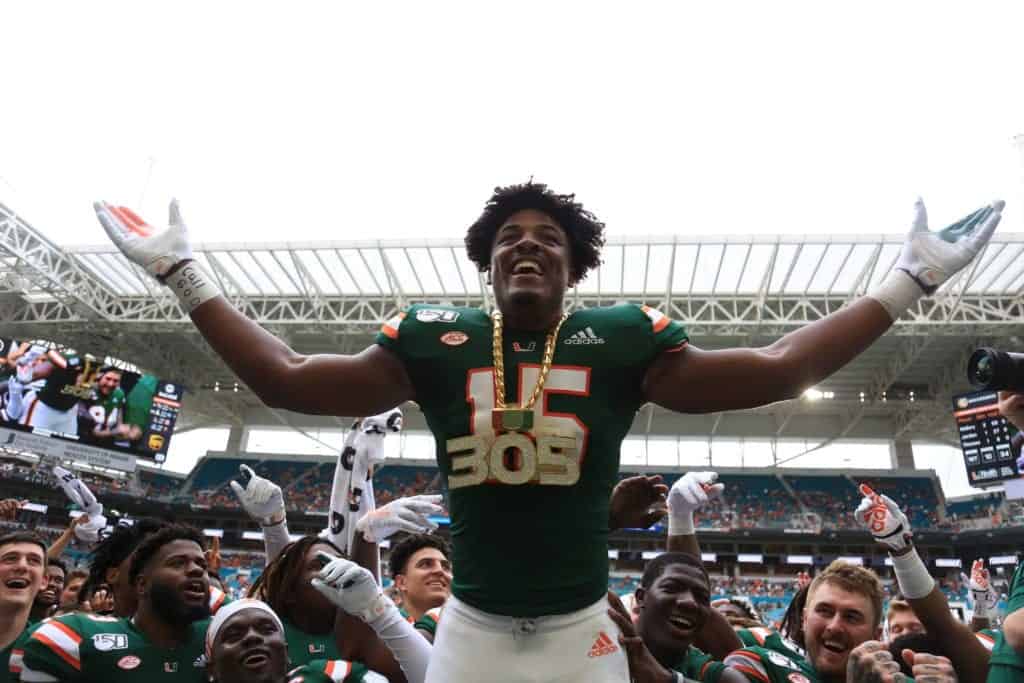 Chase Young was a rarity. It’s uncommon for a player to be so dominant at his position, that he becomes not only the consensus top positional prospect but the near-consensus top overall prospect. Young was both an elite athlete and an elite producer. Just like edge-rushing prospects Von Miller and Myles Garrett did before him, Young will have analysts searching for “the next Chase Young” for years to come. Naturally, Miami defensive lineman Gregory Rousseau will be a part of that discussion next year, but should he be?

Edge rusher is one of the most critical positions in the modern NFL. It’s one of the few positions that directly impact the ball on every down, and if teams see a “generational” edge prospect on the board, they have to capitalize when in position to.

This is why we saw the Washington Redskins bypass several greater needs to lock down Young with the second overall pick in the 2020 NFL Draft. Young’s talent and positional value took precedence over sheer need. Scouts gravitate to safe, high-upside prospects like Young, but by extension, can also prematurely convince themselves that other, less qualified prospects fit a similar distinction. Rousseau may come to serve as a case study, not only to avoid anointing players before their rise but also to preserve the correct usage of a specific player.

On the surface, Rousseau looks like he can be crowned the next Young, ending the search early. He has a similar height-weight profile, as well as a similar production sheet. Rousseau has a long 6-foot-6, 251-pound frame, and produced at a similar clip in 2019, logging 15.5 sacks and 19.5 tackles for loss for the Miami Hurricanes.

He has the size, and he has the raw production. But turn on the tape, and you’ll see a very different player in one of 2020’s top edge rushing prospects. Rousseau has similar measurables to Young, but he’s built wider and less compact and was thus used as a more versatile defensive lineman with the Hurricanes in 2019. The Hurricanes often used him on the edge, but there were also times when he lined up on the interior. Rousseau isn’t as athletic as Young, but on the interior, his speed represented a mismatch against opposing linemen.

Rousseau’s athletic profile is solid; the sophomore was seen dropping back into coverage at times, which is very impressive for a 6-foot-6, 251-pound player. That’s not to say that he should be used in coverage regularly, as he’s a bit clunky in open space. But he’s a long-strider who can cover ground quickly when he has a runway, and this makes him dangerous once he finds a seam in the protection unit.

All this being said, the key difference between Young and Rousseau, and the factor that will most heavily weigh Rousseau’s projection at the next level, is Rousseau’s get-off and bend. One of Chase Young’s best traits was his ability to get off the snap in a flash and accelerate while bending under blockers around the edge. Rousseau doesn’t display this ability consistently; his upper body is more rigid than Young’s, and while Young often overwhelmed quarterbacks with his speed, Rousseau more often used his length to close the gap instead.

Rousseau is a solid defensive lineman, but he’s not quite a pure edge prospect like Young was, and while his relative speed, size, and length serve as enticing traits on the edge, some limitations might cause him to be better suited as an edge-interior hybrid.

Rousseau is a good athlete, but he’s not dominant in that area, and he’s a bit underweight for his size at 251. He’s very lanky on tape, and yet there’s still room for him to be more explosive. With that being said, one has to wonder if adding weight on the interior might sap whatever explosiveness he does possess. Staying where he is might be best for him, but that means teams will have to know how to use him correctly, based on the situation.

With that in mind, however, being a chess piece is never a bad thing. Rousseau has enough athleticism to outmatch most linemen in one-on-one situations, and his size and length can help him wrench open gaps on the interior. Some qualified analysts have dubbed Rousseau as a top-10 pick in next year’s draft. I’m not there yet, due to his rigidity and questions of fit, but he certainly has that upside, if he can improve his flexibility, keep producing quality pressure, and hone in on his best traits.

Herein lies the danger in fixating on “the next Chase Young.” Young and Rousseau might be at the top of their position on their respective draft boards, but they are not the same types of players. In a pure edge role, Rousseau wouldn’t always thrive against more athletic tackles, and his versatility along the line wouldn’t be utilized to its full potential. Rousseau isn’t the next Chase Young; he’s just Gregory Rousseau, an exciting and intriguing defensive lineman in his own right. And in 2020, he has a chance to give that name even more weight.