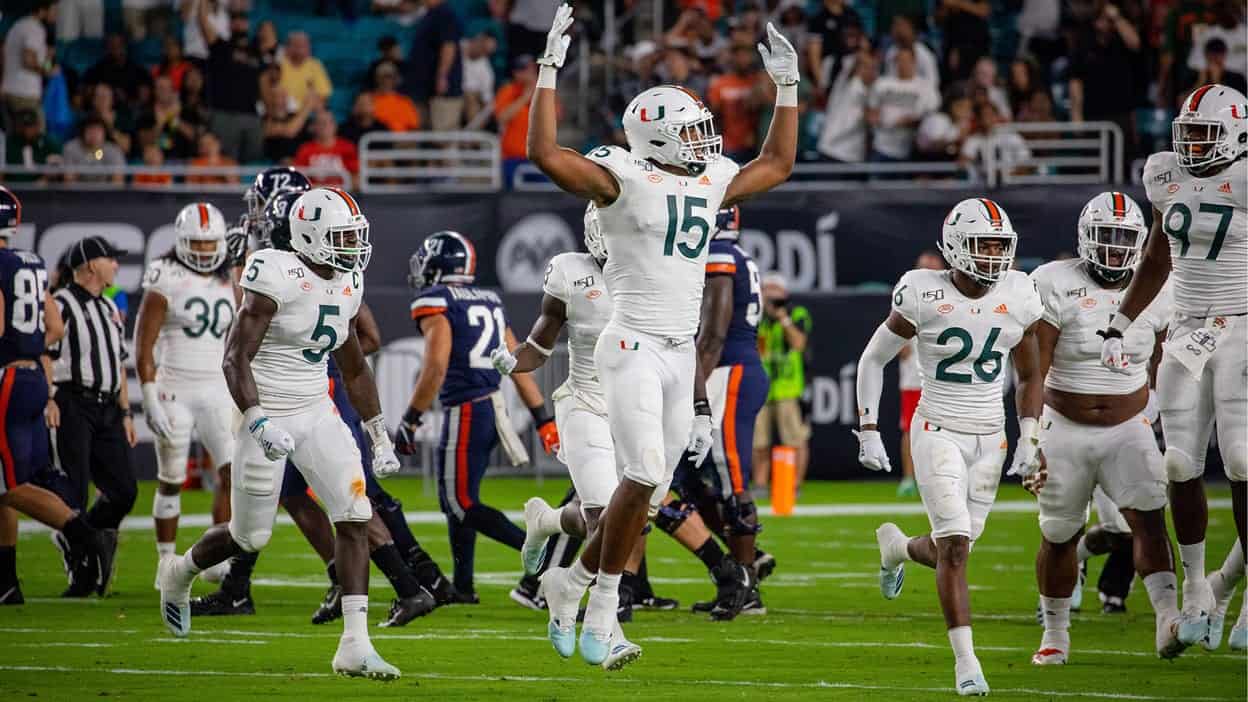 The 2020 edge class was one of the weakest groups in the entire draft despite having a premiere player in Chase Young, who is now a Washington Redskin. The 2021 class lacks both depth and an elite talent like Young. However, there are some raw players that could develop into strong prospects with the proper growth this season. So how do these players match up against each other in my eyes? These are my 2021 edge rusher rankings.

Someone who has a lot of hype heading into the 2020 season is Hamilcar Rashed Jr. As an explosive athlete with impressive bend, Rashed profiles as a high upside pass rusher and a 3-4 outside linebacker. He possesses elite flashes of burst and aggressive hand usage. However, his flashes are too and few and far between for me to view him as more than a boom or bust project. If Rashed can add a level of consistency to his game, and add some needed playing weight, he could be a very high draft pick thanks to his impressive physical repertoire.

The case of Cole McDonald’s missing dreads… Hamilcar Rashed knocked them off. pic.twitter.com/rvX2S6kAGT

In his freshman season, Xavier Thomas was the favored candidate to be the top edge rusher in the 2021 class. Despite playing on a rotation, he should have consistent impact and tools that translate to the NFL. It was to be expected considering Thomas was a consensus top 10 prospect in high school. However, once Thomas became the leader of the Clemson defensive line, he wasn’t nearly as dominant as an every-down player.

Thomas has shown at times that he has the requisite explosion, bend, and hand usage to be a dominant pass rusher, but a lack of consistency severely lowers his floor. 2018 Thomas was a top 10 player in this class. However, his 2019 regression leaves me struggling to project him higher than late-day two. How Thomas performs in 2020 will be vital to his draft stock.

Shaka Toney is arguably the most naturally “bendy” player in this class. Toney’s ability to contort his body unnaturally is a major reason why he was Penn State’s most consistent pass rusher last year. Toney elected to return to school, and with some additional weight and an extra year to refine his talents, it should be a good decision.

Penn State is heralded for a legendary training program so don’t be surprised if Toney also tests like the best athlete in the class. Toney could stand to add a bit more weight and core strength as he can struggle setting the edge. Due to this, he best projects as an outside linebacker in a 3-4 scheme.

Penn State’s Shaka Toney is one of the most explosive and bendy edge rushers in the 2021 class. pic.twitter.com/RFvh6WsstF

A well-rounded edge rusher, Michigan’s Kwity Paye can win with speed or power. He consistently puts tackles in a blender and can convert speed to power when necessary. A strong athlete with a hot motor, Paye can also set the edge well. However, a lack of discipline and consistency make him a liability as a backside defender on occasion. If Paye can clean up these inconsistencies he profiles as a very high floor edge defender. His frame and athletic ability also make him scheme versatile.

Despite being listed just under 270lbs, Joe Tryon has functioned as an outside linebacker for the Washington Huskies. He projects better as a 4-3 defensive end, given his frame, so evaluating his tape has been tricky. Tryon has the physical tools to be a quality pass rusher and the functional strength to be a plus run defender.

While I don’t think he has an elite pass-rush upside, he could be a 6-8 sack per season player for the majority of his career. Teams may also try and test Tryon as SAM in a base 4-3 scheme, as he has functioned off-ball in Washington.

Another Michigan edge defender, Aidan Huchinson is a different type of edge player than Paye. A bigger body, and a stronger edge setter, Hutchinson is a strong run defender with pass-rush upside. Despite being listed just a hair under 280lbs, his explosion and flexibility are truly impressive.

Usually, a “bendy” edge rusher comes with the downside of being under 250 pounds. Hutchinson does not have that issue. Despite being flexible, he still lacks strong athletic ability. He’s not very explosive and he won’t commonly win with speed off the edge. He’s a bit of a “tweener” who could slide to the interior on nickel and dime packages.

Gets the initial pressure on Fields, then the second effort nets him the sack. pic.twitter.com/oyedRI74tL

As one of the most productive edge rushers in the nation last year, Quincy Roche transferred from Temple to Miami where he will make up half of the best pass-rushing duo in the nation. Roche is an elite athlete with aggressive hands.

He profiles as a prototypical 3-4 outside linebacker. He lacks size and his motor can leave a lot to be desired in the run game, making me dubious to his prospectus as a 4-3 edge setter. Roche will likely continue his pass rush production at Miami, however, right now he seems to be a pass-rush specialist in the NFL.

Related | The top 25 wide receivers in the NFL

The second half of Miami’s elite pass rush duo, I expect this ranking to surprise a number of people. Rousseau was one of the nation’s most productive pass rushers last season, and his frame and athletic ability make his ceiling immense. However a lack of base power, pass rush plan, and poor leverage concern me. As Rousseau stands now, he’s an early second-round selection in my eyes. He must improve the technical parts of the game before I could warrant selecting him with a first-round pick.

Someone who likely could’ve been a top-50 selection in last year’s draft, Carlos Basham will look to play himself into a first-round selection in 2021. Playing with high intensity, Basham is constantly the benefactor of effort plays.

He possesses great functional play strength and is already a well-developed edge defender. His hands are quick, he has a high football IQ, and is a stout run defender. Basham lacks the same athletic ability as some of the other top edge prospects, but his motor and hand usage could lead him to multiple double-digit sack seasons in the NFL.

This ranking is a bit of a leap of faith. However, Patrick Jones’ blend of elite burst, length, and bend makes him an easy prospect to fall in love with. He might not possess the same pass rush production that Rousseau might, but in my eyes, Jones is a more polished pass rusher. Jones also has better play strength, making him a strong edge setter.

Jones, like most edge prospects, still has some developing to do with his hands and leverage, but his physical tools are elite and his motor runs hot. He’s currently my highest rated EDGE in the 2021 NFL Draft.