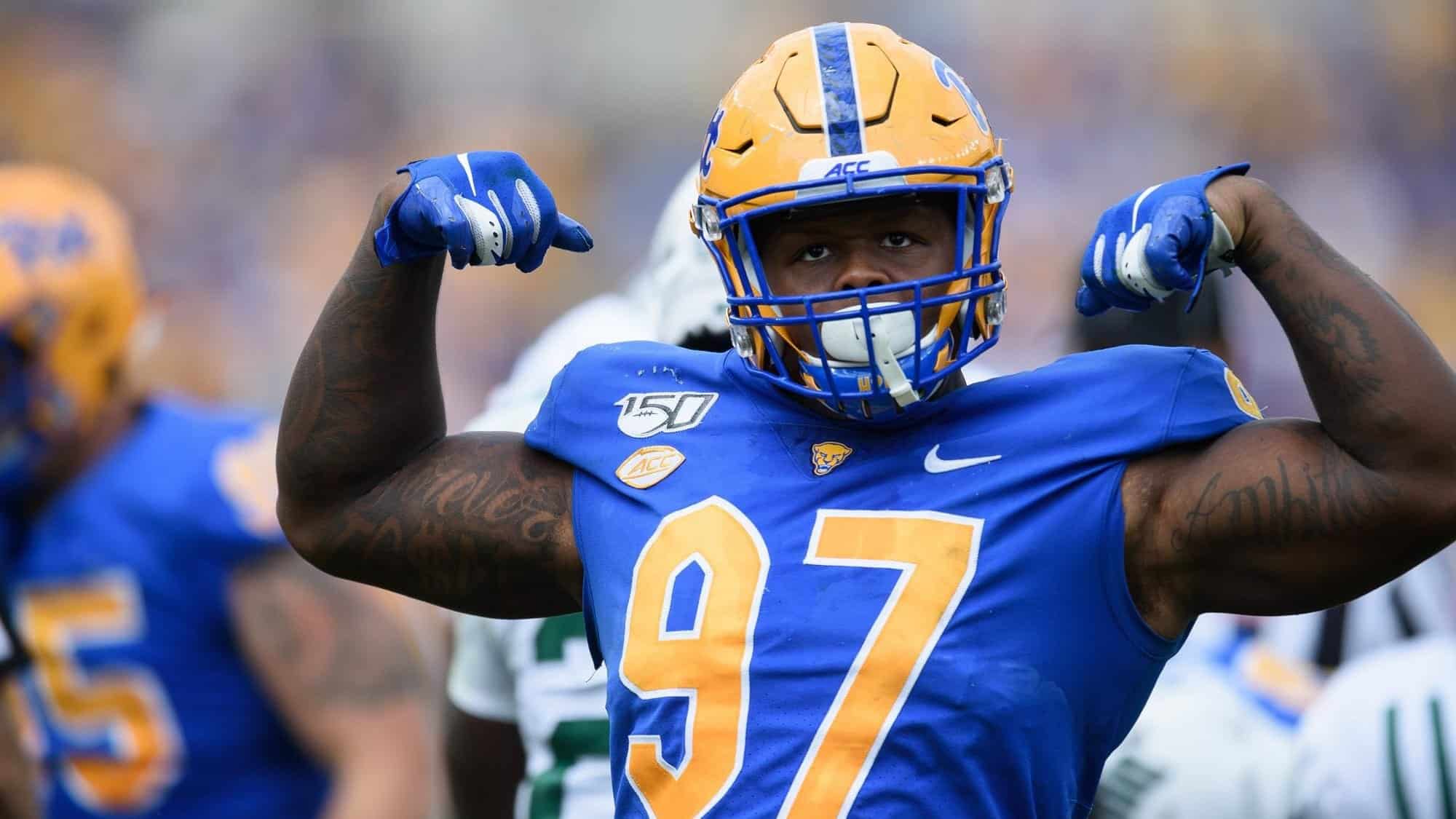 Aaron Donald set the standard for Pittsburgh defensive linemen with his devastating 2013 season. Seven years later, defensive lineman Jaylen Twyman is in position to challenge Donald’s Pitt records as he aims to solidify himself as a potential 2021 NFL Draft first-round selection.

When Donald was taken with the 13th overall pick in the 2014 NFL Draft, he left behind a legacy of exceptional play, a high level of production, and the number 97 jersey that he made famous for the Pittsburgh Panthers. As he crafts himself a hall of fame career in the NFL, any player that fills that role, and that jersey, does so with an incredible amount of pressure.

“Pressure only bursts pipes or makes diamonds. That’s why I wanted to wear that number.”

Twyman uttered this sentence during a 2019 season that saw him emerge as the next great Pitt defensive lineman. He’s aware of the responsibility and the reputation of the number and swapped into it to give himself that challenge, that pressure.

Twyman could have declared for the 2020 NFL Draft, with some analysts predicting he could have been drafted as high as the second round, but he very quickly confirmed he would return to Pitt for 2020.

“I feel like I can improve my overall game. I haven’t arrived at all, no aspect of my game. I can do a lot better things. I’m looking forward to it.”

If Twyman feels he can improve his overall game, then the rest of the ACC is in for a shock in 2020.

In 2019, he recorded 41 tackles, with 12 tackles for loss, including 10.5 sacks. He led the team in sacks, becoming the first Pitt defensive tackle since Donald to lead the team in sacks. Twyman came up just short of Donald’s season-high 11 sacks, a figure he posted in his sophomore and senior seasons.

The numbers for Twyman’s sophomore 2019 season are very similar to Donald’s 2011 campaign. Donald racked up slightly more tackles with 47 to Twyman’s 41. Donald had 16 tackles for loss to Twyman’s 12. As mentioned above, there was just half a sack between them.

It would be easy to point out that Twyman had three of those sacks against Ohio University of the MAC. At the same time, he also logged 1.5 sacks against a Penn State team that was a dominant force for much of the season not just in the BIG Ten but in the whole of college football.

His sack totals in 2019 were the second-most in the ACC and led to him receiving First Team All ACC honors.

Twyman’s performances in 2019 helped the University of Pittsburgh to its best record since 2016. With a victory over Eastern Michigan in the Quick Lane Bowl, they won their first bowl game since the Little Caesars Bowl in 2013, Donald’s senior season.

In 2019, Pitt ranked 36th out of the 130 college football programs in points allowed with a suffocating defense allowing an average of just 22.5 points per game.

They return several players from that unit in 2020, and that will allow Twyman to shine. Safety Paris Ford and fellow defensive lineman Patrick Jones II are other highly rated 2021 NFL Draft prospects and will command attention. With a dual-threat on the defensive line, teams won’t be able to consistently double team Twyman, allowing him to wreak havoc upfront.

The Pitt schedule will allow Twyman to rack up some impressive statistics against teams like Richmond, Miami (OH), and Marshall. They have a high-profile matchup against Notre Dame, which will be in the national spotlight. Twyman has shown he can excel when the light shines brightest, logging his first career sack in the 2018 ACC Championship Game against Clemson.

Coming out of H.D. Woodson High School, Twyman was highly productive against the run and as a pass-rusher. So far, during his college career, he hasn’t lived up to that promise as a run stopper. At 290 pounds, he will need to add some weight to be considered as a true run-stopping defensive lineman. He is considerably lighter than other top interior defensive linemen in the 2021 class, such as Marvin Wilson (311 pounds) and Tyler Shelvin (346 pounds).

There are no such concerns where his pass-rushing ability is concerned. He is incredibly athletic and showcases explosiveness at the point of the snap. This, combined with impressive hand placement, allows him to win in at the line of scrimmage.

There are multiple examples of his ability to use a swim move to devastating effect in 2019 against North Carolina, Ohio, and in the example below from the game against Penn State.

Pitt IDL Jaylen Twyman is legit. His hands are really, really good. This is a really nice swim move to get this sack here on Clifford. He has the potential to be a 1st round pick in the 2021 draft. pic.twitter.com/Gum3it5ted

Twyman’s athleticism has allowed Pitt to use him in several positions along the defensive line, showcasing the versatility that NFL teams covet at the next level.

The competition at the top of the 2021 NFL Draft interior defensive line class is extremely tough, with FSU’s Wilson the consensus number one player at the position.

The University of Pittsburgh hasn’t had a player selected in the first round since Donald. If Twyman can build on his impressive sophomore season, and make the improvements that he believes he’s capable of, then he can be firmly in the first round conversation and prove he is truly the next great Pitt defensive lineman.