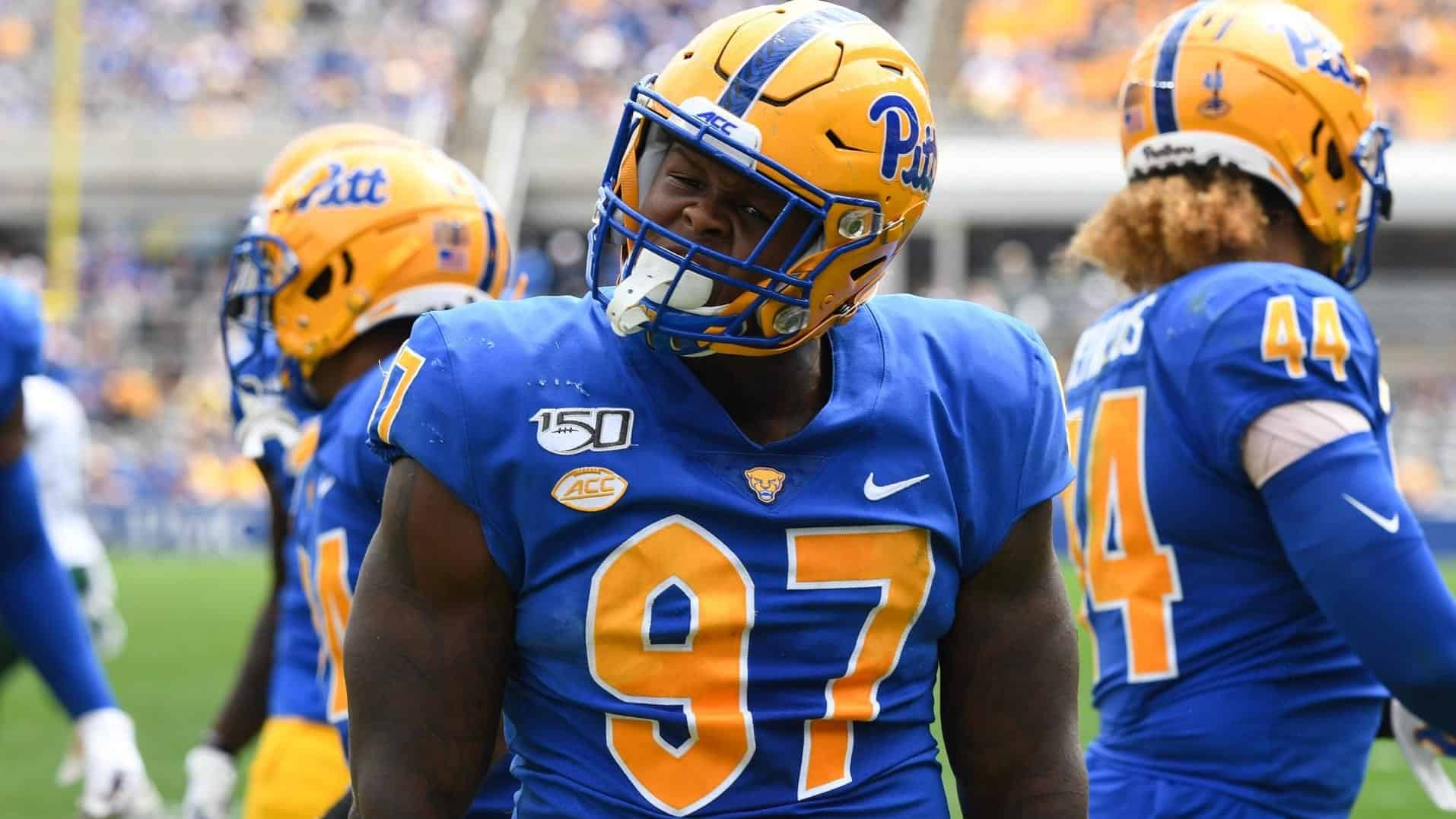 There are many distinguished defensive lines in college football worthy of carrying the “dominant” label. While few would bat an eye if Clemson, Alabama, or Ohio State sat atop the preseason rankings for pass rush supremacy, it would be utter negligence to omit the vaunted Pitt Panthers defensive line from consideration. As if the fearsome tandem of Jaylen Twyman and Patrick Jones II wasn’t convincing enough, they will be accompanied by redshirt seniors Rashad Weaver and Keyshon Camp — who are both returning from season-ending injuries that ended their respective 2019 campaigns prematurely. Even two of the Panthers’ prominent rotational linemen, Deslin Alexandre and Habakkuk Baldonado, combined for 9.5 sacks in 2019.

Without further ado, let’s take a closer look how each player factors into the equation.

The resident superstar of the Panthers’ defensive line, Twyman enters the 2020 season unanimously labeled as one of the top interior defenders in college football.

Although he made little impact in 13 games as a redshirt freshman, logging 16 tackles and a half-sack in a reserve role, Twyman would put the college football world on notice in 2019. Returning as a starter in the middle of Pitt’s defensive line, Twyman amassed 41 tackles (12 for loss) and 10.5 sacks over 13 games. Twyman became the first Panthers’ first interior defensive lineman to lead the team in sacks since Aaron Donald accomplished that feat in 2013.

While sacks can sometimes be thought of as empty stats, as they don’t always indicate impact, Twyman’s production doesn’t fall under that category. Against ranked opponents (UCF, Penn State), Twyman combined for eight tackles and 2.5 sacks, while his 2.5 sacks against North Carolina served as the catalyst that helped propel the Panthers over the Tarheels in overtime.

Twyman possesses an unrivaled explosive first-step off the ball to go along with efficient hand usage and terrific short-area quickness. While the 6-foot-2, 290-pound defender boasts a fairly deep pass rush arsenal, his swim-move is undoubtedly his hallmark. Players of Twyman’s mold are considered a rarity in today’s NFL, and Fletcher Cox and the aforementioned Donald are prime examples of how a strong interior presence can add an entirely different dimension to a defense.

Now that Twyman is officially on notice in 2020, another 10-sack season seems like a monumental task. However, the blue-chip talent’s very presence should ultimately pave a path for the rest of the defensive line to reap the benefits.

Patrick Jones II has the dominant physical traits that suggest he could feasibly vault his draft stock into the first round if his play strength and technique catch up to his athleticism in the coming months. After a fairly pedestrian first two seasons, Jones burst onto the scene as a redshirt junior in 2019, collecting 41 tackles (11.5 for loss), 8.5 sacks, and four forced fumbles. Jones’ signature performances came in a narrow loss to the Miami Hurricanes (2.0 sacks, one forced fumble), and a high-scoring affair with Duke (2.0 sacks, two forced fumbles).

Finishing second in the ACC in pressures a season ago with 55, the lengthy edge rusher has quietly ascended his way up the Panthers’ depth chart over the past three seasons. Much of Jones’ allure stems from his relentless motor and patience to work with a vast array of pass-rush moves if his initial plan is thwarted. Jones’ hands are heavy and violent, and his long arms give him a distinct advantage over most offensive tackles. The 6-foot-5, 260-pound edge rusher must continue to develop strength and power in order to efficiently anchor against the run and improve his flexibility off the edge, but with a restocked group up front, I suspect the Virginia native could be in for a double-digit sack season.

Rashad Weaver’s 2019 season was over before it began. A season of promise and intrigue was effectively marred by a season-ending knee injury sustained in fall camp.

To gauge Weaver’s on-field impact, look no further than his standout 2018 season, where the 6-foot-5, 270-pound defensive end contributed 47 tackles (14 for loss), 6.5 sacks, three fumbles recoveries, and two forced fumbles. Weaver’s sacks, tackles for loss, and fumble recoveries were all good for first among Panthers’ defenders.

Nearly a full calendar year removed from his debilitating knee injury, Weaver could prove to be the key to unlocking the Panthers’ defensive line. Teams will no longer be able to gameplan for Twyman and Jones, as they must now account for Weaver’s tenacity, motor, and bend off the edge. Although Weaver doesn’t possess the elite traits that make Jones a tantalizing talent, I suspect Weaver should see a significant spike in his production, coming just shy of a double-digit campaign.

Keyshon Camp, who suffered an early-season knee injury of his own last season, will work in tandem with Jaylen Twyman, giving the Panthers perhaps the most diverse set of defensive tackles in the ACC.

Before a knee injury ended his 2019 season prematurely, Camp was heralded as a potential breakout player. In fact, in less than a half of game action, Camp logged a half-sack and two hurries against the Virginia Cavaliers. In 2018, Camp compiled 14 tackles (2.5 for loss) and 2.0 sacks in seven games, before yet another knee injury hindered his path to prominence.

If healthy, the 6-foot-4, 295-pound defensive lineman gives the Panthers a big-bodied interior presence that can push the pocket and serve as a force against the run. Camp may be the biggest benificiary of Twyman’s presence, and should finally enjoy the breakout campaign we’ve all been waiting for.