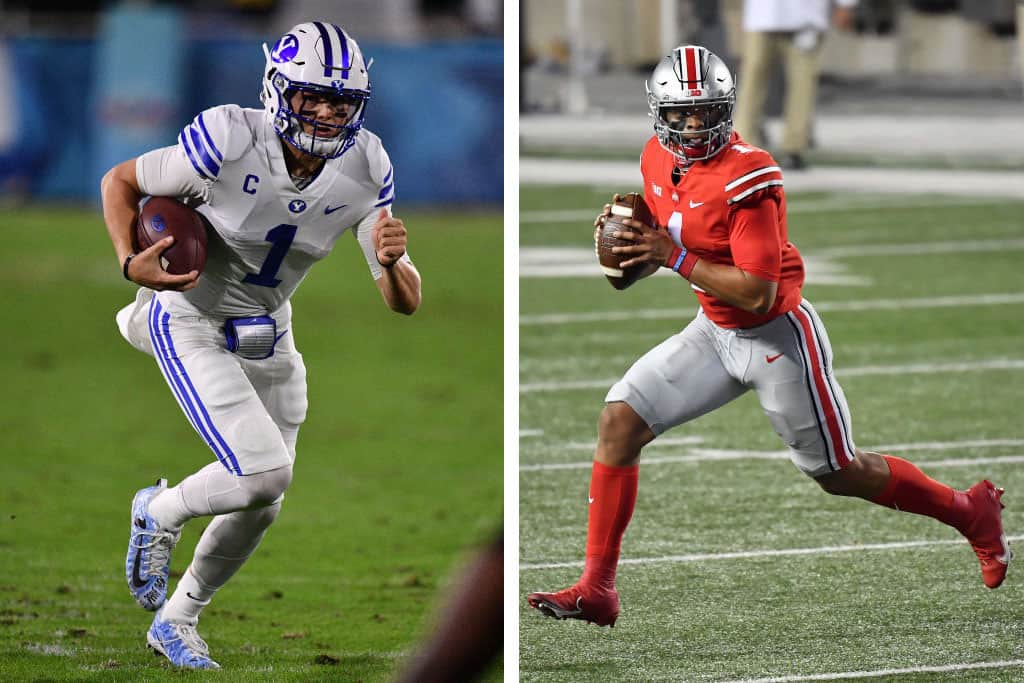 By Dalton Miller
February 2, 2021
What's in this article? Click to show
Zach Wilson and Justin Fields battle for QB2
The case for Zach Wilson
The Case for Justin Fields
Get to the point. Who goes first?

The top quarterback in this class is a lock. This has been the way since Clemson’s Trevor Lawrence won a title as a freshman. It was destiny. Until 2020 unfolded, it was assumed QB2 in the 2021 NFL Draft would be childhood rival, Ohio State’s Justin Fields, but a new name burst onto the scene. BYU quarterback Zach Wilson has a lot of the QB2 momentum in this NFL Draft, but are we overthinking this?

Note: Want to be the first to hear inside information from PFN Insiders Tony Pauline and Benjamin Allbright? Subscribe to our YouTube channel and hit the notifications icon so you can tune in live when our insiders break the latest news and rumors from around the league.

The quarterback position is an endlessly complicated web of intricacies that makes the position’s evaluation and valuation nearly impossible. Without knowing the individuals in-depth, it is impossible to know how they’ll fair from a progressive standpoint.

When former Heisman Trophy winner Andre Ware tabbed Wilson as QB2 for the 2021 NFL Draft in October, the online community erupted. The clowning only subsided after everyone started seeing the young man for themselves. There is something about him. The High School Musical aesthetic with the Jordan headband is the modern-day All-American quarterback look.

Additionally, Zach Wilson possesses an absolute hose. However, Justin Fields and Ohio State didn’t even play until October 24. Out of sight, out of mind, and the narrative changes. Fields went from locked in at the second spot to having his placement questioned by many.

It would take thousands of words to precisely articulate why one possibly should go first. Moreover, it would take a few thousand more to explain why I believe one will go before the other, despite our personal beliefs. So instead, we will keep it simple for now. Different teams view these prospects differently.

However, after reaching out to those with far more insider information than I, it appears the current edge goes to Wilson. The CFB National Championship could cement that. It could also entirely flip the media narrative, and putting out great film and a title to end his career is enormous for Fields.

The case for Zach Wilson

The Draper, Utah native, arrived at BYU as a three-star recruit. Wilson started nine games as both a freshman and sophomore. His efficiency numbers dropped from year-to-year, but Wilson battled injury throughout his sophomore season.

As a fully healthy participant in 2020, he lit the world on fire with some of his “wow” throws. The impressive uptick in his performance should be less surprising given his private work is through John Beck and company at 3DQB. That is the same company that helped Dak Prescott fix his mechanical deficiencies.

“He can make all the throws” is a cop-out cliché used by all of us to describe a quarterback’s abilities. Patrick Mahomes has the most natural arm in the league, and his ability to throw from any lower body platform and a litany of arm angles make for unbelievable theater. Wilson should pen a thank you letter to Mahomes to pave the way and take the draft capital bullet.

It needs to be made clear that Zach Wilson is not Patrick Mahomes. Wilson’s off-script play is reminiscent of the reigning MVP. He produces effortless velocity in any situation, and his ball placement teeters on the border of insane at times. From a pure passing standpoint, he might be the best in the class.

It’s challenging to put some of his throws into context, and it’s why he is so highly regarded. He can make a throw rolling around the numbers right across his body to the hashes with velocity and placement. Wilson can throw a 10-yard speed out high and outside with velocity where only his receiver can make a play on the ball. When he gears up, he can hit receivers in stride well over 60 yards downfield.

Playing on time in his offense

Things in Wilson’s system are not complicated. BYU runs many 12 personnel with 2×2 sets that allow Wilson to attack isolated cornerbacks to the field side. It allows for a clean look, and his arm enables him to make these long throws across the field with ease.

From these looks, they also run ample “shot” plays off play-action that are touchdown-to-check-down reads. This puts the processing onus on Wilson to a minimum. This is neither good nor bad on its own, but it does add a bit of an unknown for more complex looks. In RPO looks and the quick game, he appears decisive, but BYU does not often do this.

We’ve heard it with Justin Fields, but this conversation seems to have escaped Wilson somehow. There are times where, in certain situations, Wilson undeniably struggles to see the field. The more clustered the looks, the quicker his internal clock gets, and there is a bit of panic in his process. There is a particular red zone play where this rears its head.

It’s a 3×1 bunch set offensively from the 5-yard line. The back is to the trips side, and he goes in a “push” motion to the three-receiver side. UTSA doesn’t match the movement with another body, and BYU now has a 4-to-3 advantage to that side. The action by the back keeps the outside cornerback leveraged outside with eyes on Wilson.

Pocket presence isn’t fleshed out yet

This is a consistent issue in Zach Wilson’s game. Wilson is quick to leave a clean pocket, and his biggest individual game struggles have come when defenses attempt to pressure him. He looked uncomfortable for a lot of the UTSA game, but the game’s highlights carried his overall performance.

Western Kentucky and Coastal Carolina both got in his grill and made him work inside the pocket. They won the game, and Wilson struggled. In short, Wilson is a naturally gifted passer, often too reliant on living off those gifts. Growing from that is something that will only come from being thrown into the fire of NFL action where his athleticism will no longer be enough on its own to create off-script.

The Case for Justin Fields

We know the story of Justin Fields. He battled with rival Trevor Lawrence for the top overall recruit spot coming out of high school. There has not been, nor may there ever be, another instance of such early and robust fame for two high school quarterbacks simultaneously again.

Fields went to Georgia, and because Kirby Smart didn’t evolve the way his mentor Nick Saban has, he stuck with the noodle-armed, unathletic, but safe Jake Fromm and lost Fields to Ohio State in the process.

Fields is the quintessential modern quarterback prospect (kind of)

When you build a quarterback in Madden or NCAA14, you create a 6′ 2″ to 6′ 4″ quarterback that is 230 pounds and runs a 4.5 with more arm strength than you’ll ever actually need. That is who Justin Fields is. He doesn’t have quite the velocity of Trevor Lawrence, Zach Wilson, and Trey Lance, but it’s well above average.

He works with private quarterback coach Quincy Avery, who is active and popular on Twitter. In May (before the shortened Big 10 schedule), he predicted Fields would run away with the Heisman trophy and even threw out a “sub 4.4 40” comment that should have the entire world salivating.

Although Fields played at Georgia, he didn’t really play in a traditional quarterback role. In 2019, Lawrence had a stretch to begin the season where he looked human, and everybody freaked out as Fields blew defenses out of the water in his first season at Ohio State. Lawrence’s lows were not as rough as Fields, but it lasted longer than Fields’ struggles.

So, for a good month and a half stretch of canceled contests due to illness, Fields struggled mightily. His poor performances culminated in a nearly undraftable performance against Northwestern in the Big 10 Championship. And then the Clemson game happened.

Fields wins from the pocket

Like Zach Wilson, Justin Fields struggles when he’s under siege in the pocket. Duh. There aren’t many that thrive in that type of environment. However, unlike Wilson, Fields has no issues hanging inside the pocket and delivering passes despite the imminent danger to his well-being.

His bad habit is hanging onto the ball for too long within the pocket. For a potential QB2 in the NFL Draft, he gets stuck on his first read too often. There are certainly times he appears to hold the ball too long, but he’s getting important reps in an offense that will more closely resemble most NFL offenses than Wilson’s will. There will be growing pains at the next level, but there are pluses to his game that need more publicity.

One disturbing trend found in Wilson’s tape is the high volume of passes thrown in front of the sticks on third and even fourth down. The other issue was the BYU offense turned into a shotgun version of a 1960’s football game, running over and over again until they either scored or were forced into a passing situation to avoid a field goal.

Fields has no qualms throwing into tight windows created from condensed space in the red zone, particularly inside the 10-yard line. His legs add a layer to the offense as well, and his ability to process when he must push for the yards or avoid contact and slide is quite impressive. The video below shows what Fields can do in the red zone.

Inconsistencies with the deep ball

On top of being an elite football recruit, Fields planned to play at Georgia before he transferred and decided to stick to football. Like many baseball players that also play quarterback, their base can tend to extend past the point of optimal and even sometimes teeter into detrimental. That is something noticeable when Fields uncorks downfield.

As Fields’ time away from baseball distances from his subconscious, his mechanics will more closely resemble the improvements made by Dak Prescott. Prescott entered the league as an incredibly inconsistent deep-ball passer. After calming his lower body mechanics and focusing on using his body more efficiently to generate velocity and distance, he’s turned into one of the most prolific downfield passers.

I see a similar projection for Fields, who shows flashes of a more conservative base. Also, the wide base doesn’t automatically disqualify him as a downfield passer.

Get to the point. Who goes first?

The process is fluid, but today I believe Zach Wilson goes before Justin Fields. His corner currently possesses the momentum. That momentum can begin changing with a big performance from Fields against Alabama. It can further swing if he decides to participate in the athletic testing at the NFL Combine.

Either way, NFL front offices are in luck because the top of this quarterback is ridiculously talented. From a physical upside standpoint, the 2021 NFL Draft class blows 2020 out of the water. All of the top four prospects have high-end athletic traits and can be QB2 in the 2021 NFL Draft. North Dakota State quarterback Trey Lance, who began the year as most people’s QB3, might be just as impressive as the other three.

Who is QB1 in the 2022 NFL Draft? What happens to Spencer Rattler now?