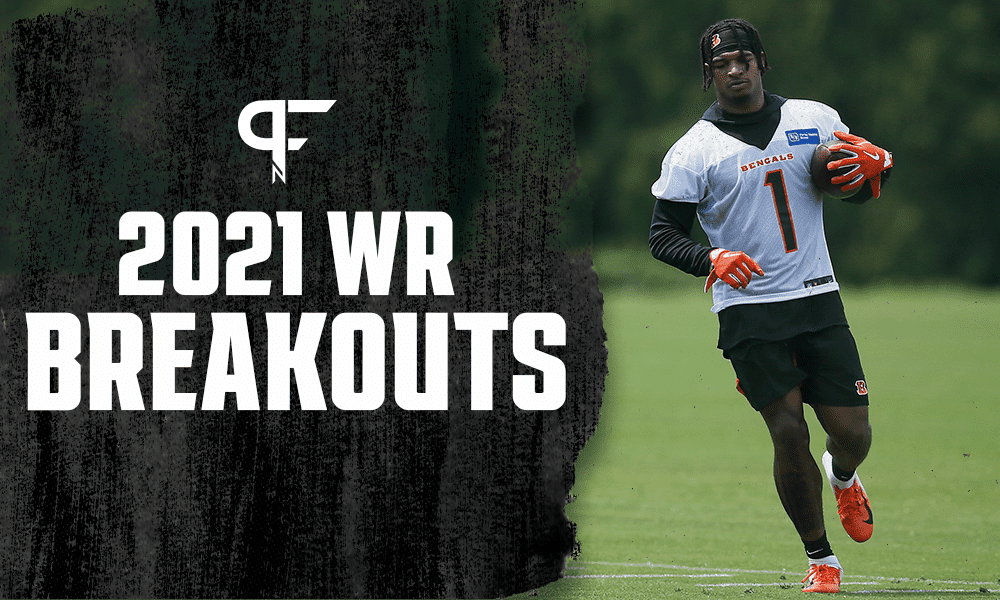 In the past few years, we've seen breakout seasons from rookies. Which ones in our fantasy football WR breakouts will do the same in 2021?

We didn’t use to project rookie wide receivers to break out in their first years at the NFL level, but that is beginning to change. Are there any rookie WRs that could be considered breakout candidates for fantasy football heading into 2021?

Which wide receivers from the AFC have the potential to break out in 2021?

Despite opting out of the 2020 season, it was no surprise to see Ja’Marr Chase as the first wide receiver off the board in the 2021 NFL Draft. What did surprise some (myself included), is him landing in Cincinnati when the Bengals had other glaring needs. But while some may be disappointed with the Bengals’ selection of Chase from strictly a football standard, fantasy managers should be ecstatic.

Chase is now reunited with his former college QB, Joe Burrow. So, we can already skip the whole chemistry aspect between the two. In his final season at LSU, Chase totaled 84 receptions, 1,780 receiving yards, and 20 touchdowns. Chase and Burrow were in sync throughout the season and ended it the best way possible — with a national championship.

Winning is less likely to occur for the duo in 2021, but this offense will be fun to watch. Tee Higgins projects to be the Bengals’ WR1 to begin the season, but it would not be a surprise to see Chase take that role sooner than later. Chase’s current overall ADP of 53.3 is a reflection of this, as he’s going a full 20 spots ahead of Higgins in fantasy drafts.

While it may seem high to select a rookie wide receiver in the fifth round, this might feel like a bargain come halfway through the season. That’s why Chase is one of the top candidates to be a fantasy football breakout WR in 2021.

All the signs point to Laviska Shenault Jr. having a breakout sophomore season in 2021 — and for good reason. He’s coming off a rather impressive rookie year in which he totaled 58 receptions on 79 targets, 600 receiving yards, and 5 touchdowns. His catch rate (73.4%) was the highest amongst rookies and seventh-best in the NFL of players with 75+ targets.

The fact that Shenault was able to put up those kinds of numbers on that offense is impressive. It’s no wonder why people are excited to see what he can do in Year 2. Not only will the Jaguars’ offense be much improved in 2021, this time Shenault has all offseason to work within the scheme (with a rookie QB and head coach, mind you).

D.J. Chark and new addition Marvin Jones are terrific targets for No. 1 overall pick Trevor Lawrence to throw to. However, I believe it will be Shenault that shines through once the clouds clear.

Which wide receivers are fantasy football breakout candidates in 2021?

CeeDee Lamb is the most sought-after in fantasy drafts of the three Cowboys’ wide receivers in 2021. It makes sense given that Lamb could very well overtake Amari Cooper as the WR1 in fantasy amongst Dallas’ receivers. Moreover, he’s going a full round and a half (ADP – 59.8) later than Cooper (41) in fantasy drafts.

As a rookie, Lamb was the WR22, averaging 13.6 fantasy ppg. He played in all 16 games, totaling 74 receptions on 111 targets, 935 receiving yards, and 5 touchdowns. Lamb also rushed 10 times for 82 yards and another score. While those numbers are impressive enough for a rookie, it’s easy to see why Lamb is a popular breakout candidate for fantasy football in 2021.

Like the rest of the Cowboys’ offense, Lamb’s numbers went down following Dak Prescott‘s injury. In Weeks 1-5 when Dak was healthy, Lamb was producing as a fantasy WR1 (17.1 ppg). For him to show that kind of rapport with the Cowboys’ starting QB right out the gate is impressive, and it’s why fantasy managers should be excited for what he has in store in 2021.

Assuming everyone stays healthy, I see no reason why Lamb won’t finish as a WR1 this coming season.

Another rookie WR with the potential to break out in 2021 is DeVonta Smith. Smith may have been drafted after his college teammate, Jaylen Waddle, but he has the upper hand in potentially producing right away.

Just a year ago, we were looking at Jalen Reagor as a rookie breakout candidate in Philadelphia. Injuries and poor quarterback play prevented that from happening, but things may be looking up for the Eagles going into the 2021 season. In fact, it wouldn’t surprise me if both Smith and Reagor emerge as breakout stars this season.

In truth, the optimism surrounding Smith and the Eagles stems from Jalen Hurts. After all, Hurts is a fantasy breakout candidate at QB, and I’d project all of the Eagles’ playmakers to reap the rewards if he does so. The Heisman Trophy winner is the leading candidate, however, to break out alongside Hurts.

Smith is the shiny new toy coming off a stellar senior season at Alabama in which he gathered 117 receptions, 1,856 receiving yards, and 23 touchdowns. He also added another score on the ground. Questions about his size are sure to continue, but I’d bet he shoots those down just as he did at the collegiate level.

With a late-fifth/early-sixth-round ADP, expectations are already high for Smith in fantasy. Nevertheless, if Hurts can take the next step, Smith should meet or exceed those expectations and break out as a rookie.