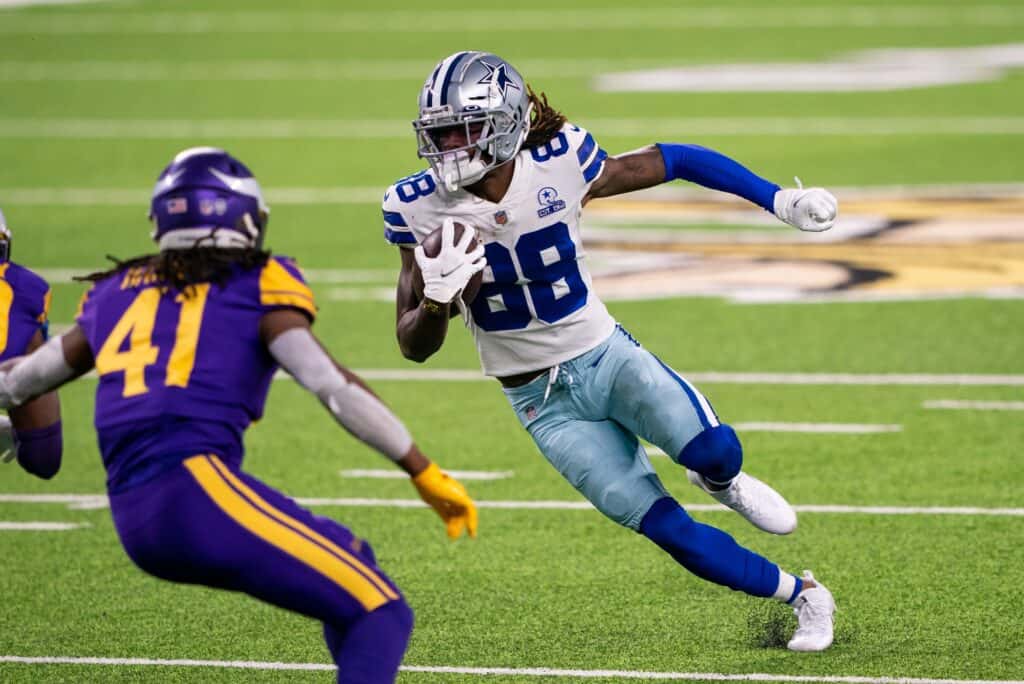 In Week 5 of the NFL season, Dak Prescott’s untimely injury put a significant damper on the production of the Dallas Cowboys wide receivers. The minority of Cowboys fans that claimed anybody could succeed with the Cowboys’ weapons and wanted to see Andy Dalton got their wish. Shockingly, their assumptions proved unfounded. The “garbage time” stats Prescott put up vanished when Dalton took the field. It’s not like they started winning more games, either.

Suppose we extrapolate that, and Prescott would have ranked fourth behind Aaron Rodgers, Patrick Mahomes, and Josh Allen over the course of the season. Dalton managed a 54.6 QBR over nine games on the season, which would be 25th in the league.

If it’s not clear yet, not just anybody can be a top-five quarterback in the NFL, even with the Cowboys’ weapons.

What Dak Prescott’s return means for the Cowboys’ receiving trio

The Cowboys nearly had three 1,000-yard receivers in 2020 under Dalton, Garrett Gilbert, and Ben DiNucci for 11 games. Extrapolation isn’t reality because progress is not linear. Nevertheless, through four games of the 2020 season, all three Cowboys’ receivers were on pace for over 1,100 yards. How big could 2021 be for the trio?

Amari Cooper may be the one receiver in the Cowboys’ wide receiver trio that’s at least partially immune to the negative effects of a Prescott injury. Cooper has a case for the best route runner in the league, and his athleticism and size are somehow underrated despite being the No. 4 overall pick in 2015.

Cooper averaged 100.25 yards per game before Prescott’s injury. After the injury, he averaged 62.7 yards per game. That’s far less than the pace he was on with Prescott slinging him the ball, but it’s still on pace for a 1,000-yard receiving season.

Despite entering his seventh season in the NFL, Cooper will only be 27 years old in the 2021 season. That six-year career boasts five 1,000-yard seasons. Furthermore, he’s seemed to have fixed his drop issues. In Cooper’s past three seasons, he’s dropped fewer passes (15) than he did during his 2015 rookie campaign (18).

Cooper’s reserved nature rubs many the wrong way. A part of that group is former elite wide receiver Jimmy Smith, who even went as far as to say Cooper lacks effort. I wonder what Smith knows about Cooper’s work ethic off the field that we do not. Somehow, he believed Cooper gave up on the 2020 season. Yet, it doesn’t seem possible as Cooper caught a career-high 92 passes and posted his highest catch percentage of his career (70.8%).

Just because Cooper isn’t being attacked by kicking nets or berating his teammates in losing efforts does not mean he does not care about football. Just because he’d rather play chess with Chidobe Awuzie than 2K21 doesn’t mean he doesn’t enjoy his teammates. Cooper has a resting disinterested face. I promise you he wants to win, and he wants to catch touchdown passes from Prescott.

A healthy Cooper is a top-10 wide receiver in the National Football League.

Michael Gallup’s pace wasn’t of the 1,600-yard type like Cooper’s was. But he was on pace for a 1,100-yard season of his own before Prescott’s injury. If there is one receiver from the Cowboys’ trio that most needs Prescott healthy, it’s Gallup. The rapport they have downfield along the sideline is evident. Dak’s deep ball accuracy improved dramatically in 2019.

Gallup felt like somewhat of an afterthought in the Cowboys’ offense with Dalton at the helm. The other two Cowboys wide receivers, tight end Dalton Schultz, and a combination of Ezekiel Elliott and Tony Pollard, felt like they dominated the football. In truth, that feeling is mostly to do with the way Dallas employs Gallup. He’s also unique in how he wins naturally as a receiver.

Gallup is most Dak-dependant of Cowboys’ receivers

Gallup isn’t the fastest, biggest, or most agile receiver. He wins vertically through route pacing and deception. The Colorado State product possesses a great late burst to create separation downfield just as he attacks the football. Gallup is also quite adept at coming back to the football in the air on back-shoulder fades. With the litany of injuries to the offensive line and mediocre quarterback play, that part of his game wasn’t as valuable.

The other thing Gallup does well is separating on late-developing dig routes. That is another area that, because of poor offensive line play, the Cowboys could not utilize. The year before, with a healthy Prescott, Gallup averaged nearly 80 yards per game.

The 2021 season is a contract year for the fourth-year receiver. If he has a healthy QB for 16 games, he will produce until he prices himself out of Dallas entirely.

The 17th overall pick in the 2021 NFL Draft took off like a rocket ship as a rookie. Despite Prescott’s injury, he caught 74 passes for 935 yards. The Cowboys put Lamb in a great situation as a rookie.

It’s important to note that he faced press coverage on only 7.1% of his charted routes by Matt Harmon. The Reception Perception project he does is incredible. That rate for Lamb is the second-lowest press rate in the history of Harmon’s project.

Still, Lamb dominated against press coverage at a ridiculous rate in his rookie campaign. According to Harmon, Lamb registered an 80% success rate against press coverage. That ranks in the 93rd percentile of all receivers. So, although Lamb thrived against zone coverage, running deep crossing patterns from the slot attacking weak spots, he actually enjoyed a higher success rate against man.

When Lamb came out of Oklahoma, he left as a well-rounded receiver whose fluidity allowed him to separate against man coverage. That’s exactly what we’ve seen so far in his professional career. Lamb’s flexibility enables him to aggressively flip horizontally off his plant foot and explode in and out of breaks. That ability makes him a menace in the slot where he can run a full route tree and use space to his advantage.

Prescott quickly realized what kind of talent Lamb possesses. He achieved his first 100-yard game in his second career contest. Lamb’s usage and ability make him a candidate to outpace Cooper for targets in 2021. He will see the most advantageous matchups from the slot, and he should only improve heading into Year 2.

There is no reason the Cowboys can’t produce three 1,000-yard receivers in 2021. A healthy Prescott should throw for nearly 5,000 yards, even on a team that gets up early in football games. There aren’t many Cowboys you shouldn’t want on your fantasy team. That much is for sure.