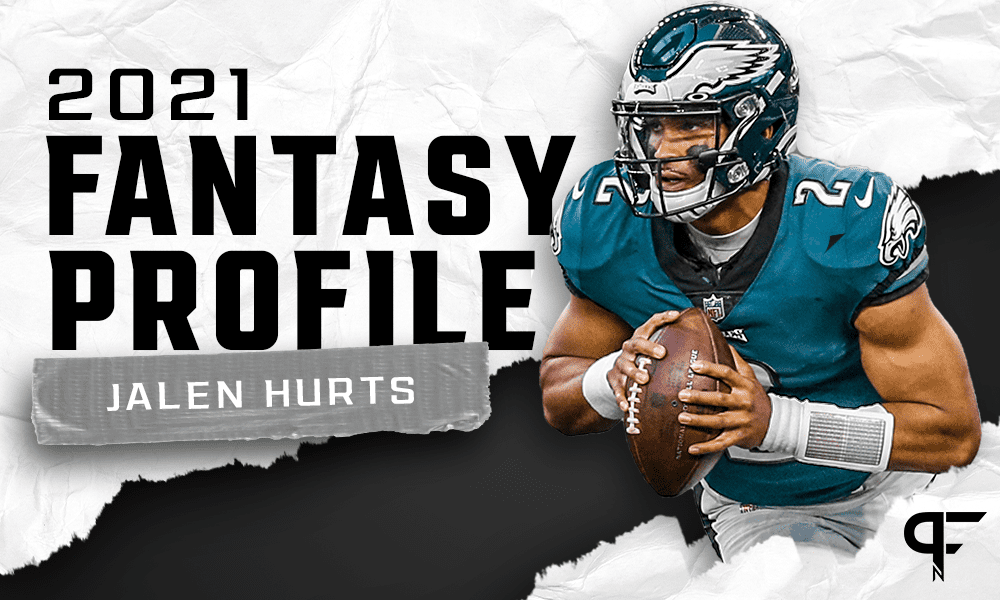 Dual-threat quarterbacks enamor the fantasy football community. Philadelphia Eagles quarterback Jalen Hurts has been touted as a breakout candidate all offseason. Can he deliver on the hype during that 2021 season? This article will provide you a fantasy outlook on Hurts, his ADP, and if you should target him in drafts this summer.

It’s important to analyze Hurts’ past before looking ahead to the future. The Eagles quarterback played very few snaps the first 13 games of the season. Hurts played just eight percent of the offensive snaps behind starter Carson Wentz. I think you’ll agree with me when I say that the former Eagles quarterback was horrendous last season.

Wentz only finished as a QB1 in 33% of his 13 active games in 2020. He also led the NFL in interceptions (15) and sacks (50). Eagles head coach Doug Pederson benched Wentz in Week 13 and turned to Hurts. The former 53rd overall pick in the 2020 NFL Draft produced mixed results in the last four games. It all boils down to this.

Hurts averaged an astounding 26.3 fantasy points per game from Week 14 to Week 17. He only played three quarters in Week 17. Hurts finished as a QB1 in Week 14-16. He averaged 230 passing yards, 1.2 passing touchdowns, and 0.8 interceptions per game in his four starts. Additionally, Hurts excelled as a runner.

The rookie averaged 68 rushing yards per game and scored 4 rushing touchdowns during that time frame. He earned his first start late in the year during an NFL season altered by COVID-19. The biggest opportunity for him to learn from last season was his 52% completion percentage. This opportunity could turn into a strength this season.

The Eagles have a new head coach in 2021

Johnson has known Hurts since he was four years old. He grew up in the Houston area and played high school football at Baytown Lee High School. One of his coaches was Averion Hurts, Jalen’s father. This bodes well for Hurts. Eagles’ backup quarterback Joe Flacco does not seem open to mentoring based on past comments. And on top of that, Hurts will have a plethora of talent on offense in 2021.

Upgrades at the wide receiver position

Philadelphia’s receivers struggled mightily over the last two seasons. The Eagles have used first-round draft picks in two consecutive seasons on receivers to change this trend. There’s plenty of room to improve this unit in 2021.

Jalen Reagor had a slow start to last season. He finished with 31 receptions for 396 receiving yards. Reagor has the explosiveness to develop into a great receiver. NFL Insider Adam Caplan reported that Reagor is expected to operate from the slot this upcoming season. This will be a much better fit for the Eagles’ 2020 first-round pick.

DeVonta Smith’s skill set will translate well to any offense. The Eagles’ 2021 first-rounder holds the SEC and Crimson Tide record for career receiving yards (3,965) and touchdowns (46). Smith can terrorize defenses anywhere on the field.

The Eagles also have other offensive weapons such as wide receiver Greg Ward, running back Miles Sanders, and tight end Dallas Goedert.

According to reports, new Eagles offensive coordinator Shane Steichen will emphasize the screen game and set up the passing game via play-action. Reagor, Smith, and Sanders are particularly lethal in the open field.

Smith ranked first in screen receptions (35) and screen yards (304) during his final season at Alabama. He registered the fifth-most receiving yards (863) from the slot. Once Smith and Hurts are calibrated, they will eviscerate the rival NFC East teams.

The Eagles’ offensive line was banged up all last season. The unit’s quality of play was up and down all year. The Eagles selected center Landon Dickerson out of Alabama in the second round of this year’s draft. He was viewed as one of the top centers in the class by many analysts.

If the veterans on Philadelphia’s offensive line stay healthy and perform at the level the coaching staff is accustomed to, the unit can be one of the top units in the NFL.

The stars are aligning for Hurts to have a magical sophomore season. Now, let’s dive into our projection for Hurts in 2021.

The Eagles have Hurts surrounded with offensive weapons at every position. It is wise not to doubt rookie quarterbacks with accuracy issues with rushing upside. Allen and Jackson are recent examples of that mindset backfiring.

Moreover, Sirianni and Steichen have some experience with dual-threat quarterbacks like Hurts. The Eagles also have Johnson as an assistant coach on the roster.

A reasonable projection for Hurts is around 3,700 passing yards, 20 touchdowns, and 10 interceptions. He could finish with nearly 750 rushing yards and 6 touchdowns. The second-year pro could finish as a low-end QB1 in 2021

Hurts is being drafted as the QB10 according to Fantasy Football Calculator with a seventh-round ADP. The trend is also similar in pay-to-play fantasy formats such as the National Fantasy Championship. Hurts has an ADP of 79.8 as the QB11; his ADP is surprisingly higher on Sleeper (115). Hurts’ ADP could continue to rise this summer as the preseason hype continues to build.

Absolutely. Hurts’ development as a passer entering his second season and his rushing upside are too good to turn down. Still, I may pass if Hurts’ ADP rises substantially. If you miss out on him, you could always wait and select Dolphins quarterback Tua Tagovailoa.

Keep Reading! Dynasty Superflex Mock Draft 2021: Quarterbacks fly off the board in Round 1