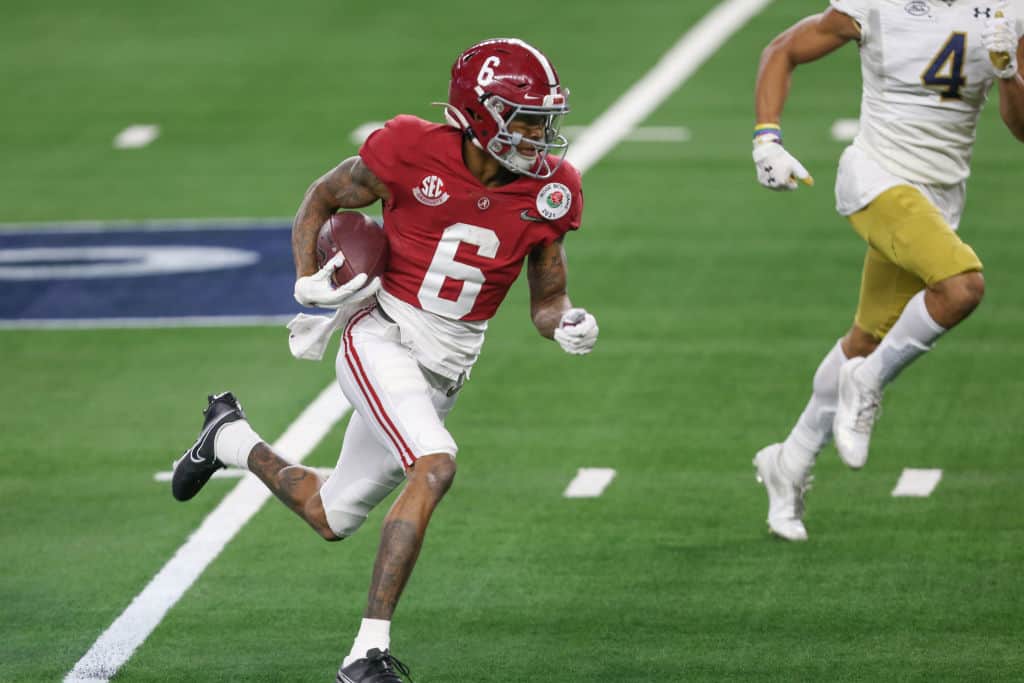 One of the most decorated and electric players in the 2021 NFL Draft, Alabama’s WR DeVonta Smith will be on the radar of every dynasty and fantasy football player this year. After winning the Heisman Trophy, Smith’s dynasty value is amongst the top players in the incoming rookie class.

Any superlative you can think of would likely fit Smith. After having a season for the ages, his hype could not be any higher. The fact he was once being discussed as a plausible top-three pick in the 2021 NFL Draft despite weighing less than 180 pounds should speak volumes about his game.

In dynasty, wide receivers extend your window to chase championships. Given the longer time frame where they can maintain elite levels of play, they are the foundation of your team. As a result of this, they are also carrying some of the highest implied value. The 2021 class of rookies is as good as we have seen in years, making it a struggle at times to find value disparities amongst the top of the class.

Regardless of his size, Smith’s fantasy value should be no less than the WR3 of this 2021 rookie class for dynasty. His nuanced route tree, release, explosiveness, and sure hands make him one of the most coveted players of the entire class.

It’s interesting that somehow going at pick No. 10 seems like a slide, but that speaks to how good Smith is. There were talks about Smith could have gone to Miami, but in the end, he still finds his way to a former teammate, this time with Jalen Hurts. The Eagles had a massive need for receivers, and if Hurts was to succeed, they needed to bring in a playmaker.

There is arguably no better playmaker than Smith. Paired with Jalen Reagor, the Eagles have two dynamic receivers who can take over the game at any moment. What will be interesting is to see how they are schemed. Both Reagor and Smith are more of a slot-style receiver, meaning they could compete for targets in the same area. I still believe in Smith coming out on top and the Eagles moving Reagor to the “Z.” At the lowest, Smith is the WR3 in dynasty rookie drafts. He is the best route-runners in this class, and his value should remain consistent as the season approaches.

His first two years at Alabama went relatively under the radar, given the surrounding talent. Well, all except for one play. In his sophomore season, Smith caught 42 passes for 693 yards and 6 touchdowns. What defined his season, however, was the game-winning catch against Georgia.

The defender made a crucial mistake by giving Smith space. Even though he gave him just a six-yard cushion, Smith ate it up. By the time he caught the pass from Tua Tagovailoa, he had over eight yards of separation.

Smith’s aura compared to the recent lineage of Alabama WRs

He had 1,256 yards on 68 passes for 14 touchdowns. Smith was first in yards, second in targets, first in touchdowns, and his 18.5 yards per reception were second only to Ruggs at 18.7 even though he had 28 more receptions.

Smith was the first Crimson Tide WR to have multiple 200-plus yard performances in a single season since Amari Cooper in 2014. Against Old Miss, he set an Alabama single-game receiving record with 274 yards and an SEC record with 5 touchdowns.

If a player has one season like this in their collegiate career, we notice it in fantasy. For someone to do it again and go even higher is a whole different type of special. It didn’t take long for Smith to see his dynasty value skyrocket.

It’s one thing to have a good game when no one knows who you are. It’s a different thing entirely to do it when everyone and their brother knows you are the primary target.

Playing in all 13 games, Smith caught 117 passes for 1,856 yards and 23 touchdowns. He had nine games with over 130 receiving yards and three of 200 or more. His 4-touchdown game against Mississippi State made him the only player in SEC history with two or more 4-touchdown games in a career.

Smith holds the SEC and Alabama career record for receiving touchdowns with 46 and is the receiving yards leader with 3,965.

In addition, Smith was the recipient of the Biletnikoff Award and Paul Hornung Award. Most notably, Smith became the first WR since Desmond Howard at Michigan to win the Heisman Trophy. He led the nation in receptions, receiving yards, and touchdowns, and converted a first down or a touchdown on a team-high 85 of his receptions.

Where should you draft Smith in dynasty rookie mock drafts?

Ja’Marr Chase is the WR1 with Smith as the WR2, but they are in the same tier. He can do everything on the field. We saw him play out wide in the X and come inside into the slot. His routes are impeccable, and even though he is 6’1″, 166 pounds after a Big Mac, I don’t care.

“But what about when he goes against physical lockdown cornerbacks?”

Honestly, how many of those are even in the NFL anymore? Jalen Ramsey and Xavien Howard? I don’t see Darrelle Revis coming back anytime soon. Furthermore, if that is the argument, then how come D.K. Metcalf was jammed up by Ramsey? By that logic, if a guy looking like a Greek god can’t do it, then no one ever will.

There is so much more to it than that at the NFL level. What is their footwork? Are they able to speed up or slow down based on the defense? When working an outside release, do they dip their inside shoulder to get past a defender? All of these things go into a successful WR at the next level.

It’s not just 40-time and how good you look in your underwear. Smith checks every box and is the second-highest valued fantasy WR for me in the 2021 dynasty rookie class.