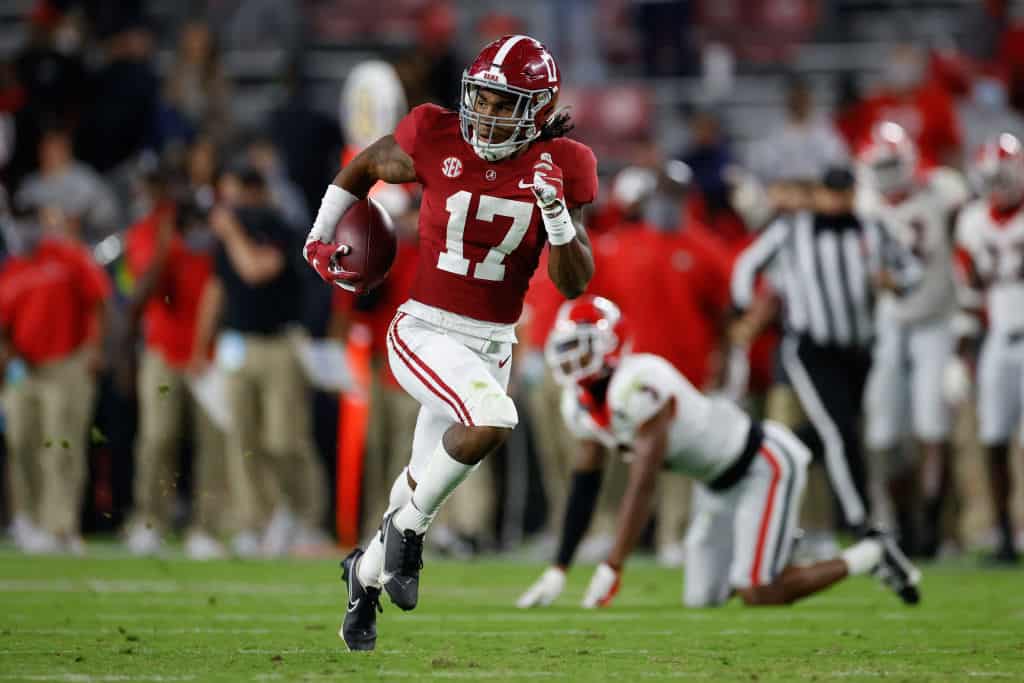 TUSCALOOSA, AL - OCTOBER 17: Jaylen Waddle #17 of the Alabama Crimson Tide runs in a touchdown in the second half against the Georgia Bulldogs at Bryant-Denny Stadium on October 17, 2020 in Tuscaloosa, Alabama. (Photo by UA Athletics/Collegiate Images/Getty Images)
What's in this article? Click to show
Jaylen Waddle’s dynasty value for 2021
Despite playing with three first-round WRs, Jaylen Waddle shined at Alabama
Where should you draft Waddle in dynasty rookie mock drafts?
Want more fantasy football analysis and news?

In a 2021 rookie class filled with incredible talent at the wide receiver position, Alabama WR Jaylen Waddle is among the very best this class offers. Jaylen Waddle‘s dynasty value is set to explode in his first year as a professional by bringing a rare combination of hands, explosiveness, body control, and route running to fantasy football.

If you like wide receivers, the 2021 NFL Draft class is for you. Of this class, there is an upper tier of receivers who are somewhat interchangeable in rankings. DeVonta Smith, Ja’Marr Chase, Rondale Moore, Rashod Bateman, and Jaylen Waddle. Of this group, Waddle might be the most explosive of the bunch.

In open space, Jaylen Waddle is a defender’s worst nightmare. His low-4.30 speed destroys angles of would-be tacklers. You know it, they know it, and so do NFL coaches.

This is why draft capital for Jaylen Waddle is the least of our concerns. Even if he goes off the board as the WR3 of this class, he is likely to go ahead of where former teammate and current Las Vegas Raiders WR Henry Ruggs did last year at 12th overall.

In dynasty, running backs help you to win now. But elite wide receivers keep you in a championship window for a long time. They stay at an elite level longer and tend to hold their value better in dynasty. It’s not uncommon to start five wide receivers anymore in dynasty.

The more often you can slide in someone as talented and game-breaking as Jaylen Waddle is, it gives you a massive advantage. If you are looking for why Jaylen Waddle’s dynasty value could take a hit and maybe slide in drafts, it could very well be an exercise in futility.

As a true freshman at Alabama in 2018, Waddle was named the SEC Freshman of the Year after recording 45 receptions for 848 yards and 7 touchdowns. Serving as a punt returner, he also returned 16 punts for 233 yards and a touchdown. As a freshman, he had three games with over 100 yards receiving and averaged 18.8 yards per reception.

Waddle was named first-team All-SEC as a return specialist. In addition, he was named SEC Special Teams Player of the Year. As both a receiver and returner, Waddle totaled 1,227 all-purpose yards for the Crimson Tide. If you want to see his talent on full display, watch the 2019 Auburn game.

Waddle had 4 touchdowns (3 receiving, 1 kickoff return) against the Tigers. He had 4 receptions for 98 yards but scored on 3 of those receptions. Working on special teams, he had 3 kickoff returns for a total of 132 yards, highlighted by a 98-yard run before the half. If there is one game to catch to get your opinion on Jaylen Waddle’s potential dynasty value, I would start here.

With news of Ja’Marr Chase opting out, it was left to Jaylen Waddle to close the gap on what could be the WR1 spot in the draft. Unfortunately, his season did not go as planned.

In the first four weeks of the season, Waddle was on Heisman Trophy pace. He had 25 receptions for 557 yards and 4 touchdowns in his first four games. His lowest receiving total was 120 yards against Ole Miss. At the time, he was ahead of teammate DeVonta Smith, who went on to win the Heisman Trophy.

In Week 5, disaster struck on the opening kickoff for Jaylen Waddle. He suffered a gruesome ankle injury that was viewed at the time as season-ending and required surgery to repair. Yet, somehow, Waddle would return.

Waddle somehow gutted out a return to the field against the Ohio State Buckeyes with a berth to the national championship on the line. Clearly hampered and less than 100%, he managed to catch 3 passes for 34 total yards, converting a first down on 2 receptions.

Jaylen Waddle ended his career playing in 34 games over three seasons, catching 106 passes for 1,999 yards and 17 touchdowns. As a returner, he racked up 947 yards on 47 kicks with 3 touchdowns.

In his collegiate career, Jaylen Waddle did more than enough to solidify his dynasty value. He played both outside and in the slot. Waddle will certainly be on the field beginning Day 1 with his return skills.

Where should you draft Waddle in dynasty rookie mock drafts?

When I am drafting in dynasty, I go by tiers. That is unless I have a positional need on my roster. So long as I can land a player in that range, I am happy.

Of the wide receivers I mentioned earlier (Smith, Chase, Waddle, Moore, and Bateman), they are interchangeable based on preference. I have been on record saying that DeVonta Smith is my WR1 in 2021 for dynasty. However, I would have no argument for Jaylen Waddle either.

At 5’10”, 182 pounds, I am not overly worried about size. Waddle’s route running and separation rivals Smith for the best in the class. What I love about Waddle’s game is how smart he is.

Rather than just going pedal to the metal all the time, knowing that no one is keeping up, Waddle also knows that can cause issues. He can read the defense as the play is happening and manipulate his route speed to stay in the soft spot instead of running into the defender and shrinking the window. Thanks to his elite speed, Jaylen Waddle knows that he can leave people grasping at his vapor trail.

Waddle is a bona fide elite wide receiver at the next level. There should be no surprise if he becomes the next Tyreek Hill out of this class. Whether it is Superflex or 1QB, he should never see the end of the second round. Jaylen Waddle carries some of the highest dynasty value of the class, given his enormous upside.