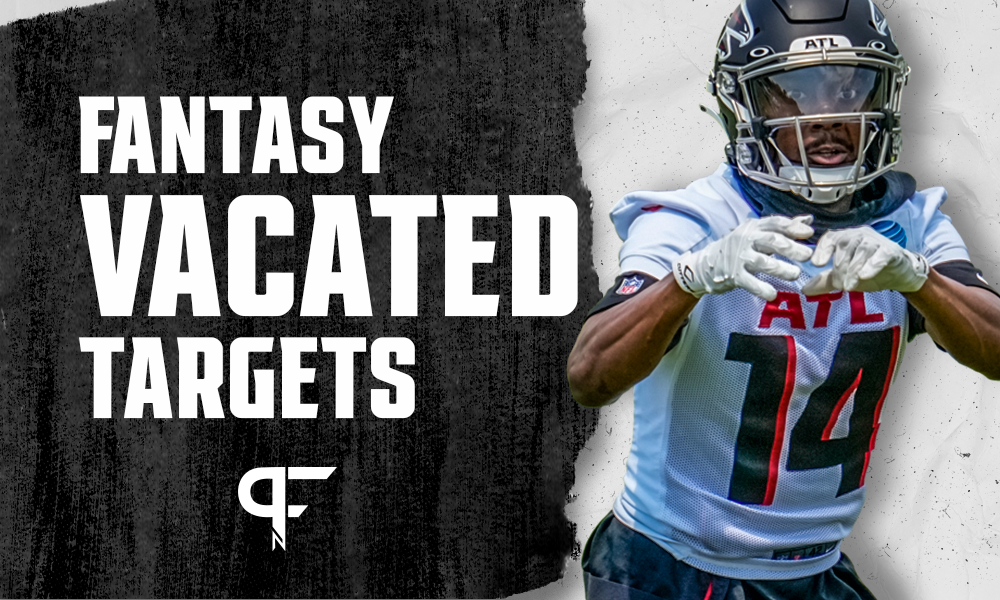 When looking for potential values in fantasy football, finding teams with a large share of vacated targets can be a way to pin down opportunities. While not a perfect system, looking at vacated targets from the year prior can help us find sleepers and the like in upcoming fantasy football drafts that might not have been considered before.

Not all vacated targets are created equal

Simply using vacated targets as a singular point for potential production is an oversimplification of the term. Can it help point out possible values in fantasy? Sure, but we also know that not every target is created equal.

What “role” on the offense is the vacated targets coming from? Are they more shallow crossers, deep attempts, or better yet, of the red-zone variety? Just because there might be a 25% vacated target share floating around, if the two primary receivers and red-zone options are still on the team, those will likely be vacuumed up by them rather than a longshot fantasy hopeful.

There is a big difference between targets inside the 20-yard line and looks from inside the 5-yard line. Luckily for us, data can help us use an inclusive term and take a more granular look and find valuable vacated targets and how fantasy football can be impacted in 2021.

Teams with significant vacated targets heading into 2021 for fantasy football

While not an exhaustive list, we will hit some of the most impactful teams for fantasy football.

In terms of just raw vacated targets from 2020, no team has more than the Detroit Lions. The losses of Kenny Golladay, Marvin Jones, Danny Amendola, and others accounted for 360 of the Lions’ 582 passing attempts in 2020. Those players also accounted for 3,516 of the air yards (72.3%), led by Jones at 1,447. Additionally, they lost players responsible for 50% of the targets inside the 10-yard line (15).

Golladay, Jones, and Amendola combined to average 18.52 targets per game last season. During the offseason, the Lions added Tyrell Williams and Breshad Perriman, but neither are considered high-target pass catchers. The biggest winners for me are rookie WR Amon-Ra St. Brown and TE T.J. Hockenson.

St. Brown profiles to be a high-volume type receiver and could be Jared Goff’s new Robert Woods in Detroit. I have St. Brown penciled in to lead the receivers in targets with over 100 as a rookie. Hockenson will be the other beneficiary and build on a successful TE5 (11.0 ppg) campaign. Moreover, he will presumably lead the team in red-zone targets.

It’s easy to forget A.J. Green’s quiet season. But many are surprised to see he received 104 targets and had 31% of the air yards in 2020. Joe Burrow flashed the ability to sustain multiple fantasy-relevant receivers. Before his injury, he was on pace for an absurd 776 passing attempts.

With just over 9 targets per game available, Tee Higgins will see a bump. But Ja’Marr Chase will eat nearly all of the vacated targets. I’ve gone through my initial projections, and I have difficulty getting Chase under 130 targets and 1,150 yards, even with Higgins seeing 20% of the targets. The vacated targets are there for the Bengals, and we could see multiple fantasy-viable WRs from their offense.

A.J. Brown is likely going to have a career year in terms of targets. Still, it will not be the 160 we dreamed about because the Titans brought in reinforcements in the form of Julio Jones. You might have heard of him. Even at 32, Jones remains one of the all-time greats and can take over any game. Since his rookie season in 2011, Jones’ average finish in PPR scoring is WR17.5. He has totaled 310.94 points per season and 18.66 points per game while seeing 132 targets.

While I do not expect to see him reach this level, even with the vacated targets, Brown and Jones will eat up the majority and are high-end fantasy assets. Reynolds has seen his value waver a touch but could be more advantageous now seeing the opposition’s third-best DB. Although there will be fewer targets to go around, they come from one of the most efficient offenses in football from a fantasy aspect. The Titans averaged 1.81 pts/tgt (seventh) and 2.7 pts/rec (second).

Many have bemoaned the Saints’ offense and what the post-Drew Brees passing attack will look like in 2021. But perhaps we jumped to conclusions. With the loss of Emmanuel Sanders and Jared Cook, the Saints have opened up 174 targets (10.8 per game) and 50.3% of their air yards (1,599 yards). 13 of those targets come from inside the 10-yard line (48.1% of team total).

Michael Thomas might be undervalued. Even in the four games with Tayson Hill, Thomas was the WR15 (16.1 PPR) and saw 37 targets (33% target share and 48% air yards). With Jameis Winston, his outlook could be even higher and should result in a return to WR1 status.

I also like both Tre’Quan Smith and Adam Trautman for fantasy. Cook led the Saints in end-zone targets for the past two seasons, and Trautman will be the TE1 this season on the depth chart. As for Smith, the Saints lack any other competition for targets at receiver. Smith was the team leader in fantasy points per target in 2020 (2.06) and points per reception (3.02). With a more significant opportunity in front of him thanks to vacated targets, Smith could be a late-round gem in fantasy.

Until the Jones trade, the Atlanta Falcons returned the majority of their players. Their largest absences came from their running backs in Todd Gurley (34 targets), Brian Hill (30), and Ito Smith (26). The receiver corps, outside of depth players, remained intact. Less than 10% of the total air yards were left unintended. Then Jones was shipped to Music City. Now, the Falcons enter 2021 with 213 vacated targets, 1,173 air yards (22.5%), and 10 red-zone targets (25.6%).

The most important name will be Kyle Pitts. Rather than drafting a tight end, the Falcons were selecting their replacement for Jones. This past season, the Falcons recorded the fourth-most targets and fifth-most passing yards. That will likely carry over due to the horrendous defense. Matt Ryan is still playing well, and after going through my initial projections, Pitts could see over 115 targets as the TE4 in redraft.

Russell Gage will be an auto pick for the second year in a row for me in the middle-to-late rounds. Playing in 16 games (eight starts), Gage corralled 72 of his 109 targets for 786 yards and 4 touchdowns. His performance set career-high totals across the board. Even in games where Jones was available, Gage saw virtually no change in production. In nine contests together, Gage averaged 10.93 PPR points compared to 11.01 in seven games without him. Now, as the WR2/3 depending on how you want to label Pitts, Gage is primed to cash in on new opportunities.