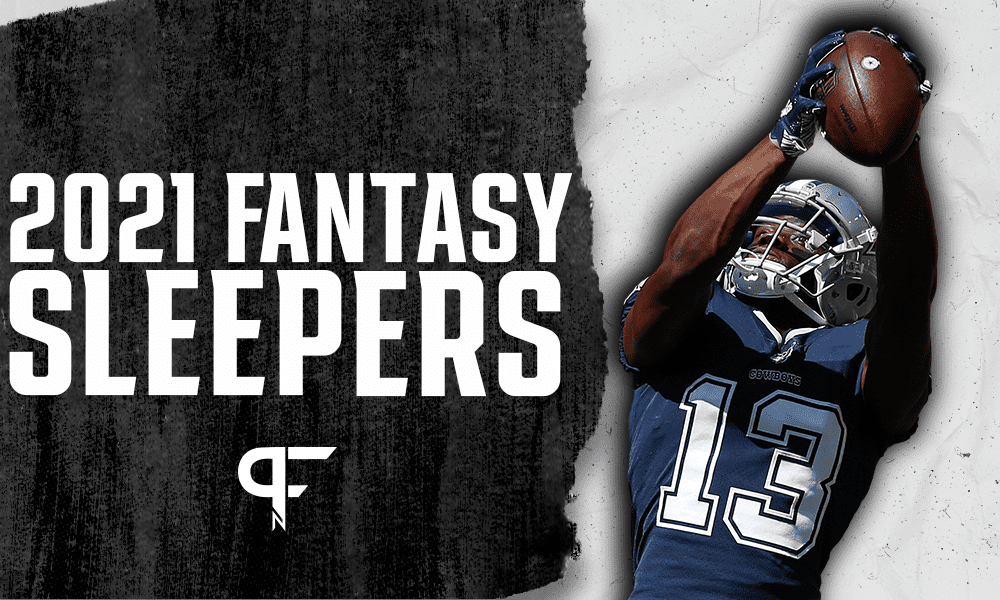 This article will tell you about nine fantasy football sleepers you should aggressively target in drafts heading into the 2021 season. A sleeper is a wide receiver, quarterback, running back, or tight end overlooked by many in the fantasy football community and will be selected later than they should be in drafts. Without further ado, let’s dive into the analysis!

Fantasy football sleepers are players expected to outperform their average draft positions in 2021. Gain the advantage in your leagues and target these players.

Let’s start with signal-callers — who can you roster that’ll outpace your draft investment?

What thoughts enter your mind when you hear Daniel Jones’ name? Some remember that he threw 12 interceptions and fumbled the football 18 times last season. New York’s offensive line didn’t do Jones any favors considering their struggles in pass protection. Others remember that he averaged a disappointing 15.8 fantasy points per game with only two QB1 finishes. Jones averaged 20.6 fantasy points per game during the previous season.

It’s important to remember that COVID-19 disrupted the offseason program of every NFL team. This is particularly important for players developing from their first to second seasons. The Giants also lost Saquon Barkley to a season-ending knee injury. The Giants lacked playmakers and this was evident in their offensive production.

The only other team that averaged fewer total yards per game than the Giants (300) were the Jets (280). The great news is that the Giants signed wide receiver Kenny Golladay during free agency, selected Kadarius Toney in Round 1 of this year’s draft, and improved the offensive line. Moreover, Barkley is on track to return.

The Giants have done everything to position Jones for success in 2021. His ability to create fantasy points as a passer and runner are highly coveted traits in quarterbacks. Jones has the floor of a high-end QB2 and the ceiling of a low-end QB1 this season.

Which players toting the rock can be a valuable asset late in the draft?

The Lions have 243 unaccounted rushing attempts entering the 2021 season. Fantasy managers assumed that running back D’Andre Swift would be deployed as a bell cow. The Lions coaching staff had other plans and signed Jamaal Williams to a two-year, $6 million contract with $3.25 million guaranteed.

Swift only averaged 13.2 opportunities (rushing attempts and targets) per game last season. He recorded six games with 15 or more opportunities in 2020. Swift had the fourth-highest Fantasy Points Per Opportunity (1.11) among running backs.

Williams has also been productive throughout his career in a complementary role. He was the first player in Packers history to finish with 450 or more rushing yards and 200 or more receiving yards in each of his first four seasons. Williams finished as an RB3 or better in 69% of his career games in PPR formats, including 11 RB1 finishes.

Lynn has been the architect of run-heavy and pass-heavy offenses throughout his coaching career. With quarterback Jared Goff under center, it would be wise to lean heavily on the running game and leverage their backs as receivers out of the backfield. Lynn schemed 26% of passes and 41% of touches to running backs during his four years with the Chargers. This backfield is shaping up to be a 60/40 split, with Swift leading the committee. Williams should be a solid value behind the Lions’ improved offensive line.

The Broncos selected Javonte Williams No. 35 overall in the 2021 NFL Draft. It’s unlikely that Denver would draft the former UNC running back this high and not use him. Williams stockpiled 1,444 total yards on 187 opportunities last year. His 1,140 rushing yards were the 13th most in UNC history, sixth-most in the country, and third-best in the ACC.

Melvin Gordon is entering the final year of his contract. His two-year, $16 million deal included a $4 million signing bonus and $13.5 million guaranteed. Gordon averaged 17.3 opportunities per game in 2020 and played 62% of the offensive snaps. He only averaged 13.8 PPR fantasy points per game.

The Broncos have 127 unaccounted rushing attempts entering the 2021 season. Gordon and Williams are both competent as receivers out of the backfield. This committee will likely be a 50/50 split.

Which WRs can you count on to outproduce their ADP?

No one knows what the Jaguars’ offense will look like in 2021 under new head coach Urban Meyer. One thing that we can agree on is that Laviska Shenault will be a key contributor.

Shenault is an offensive Swiss army knife. He caught 58 of 79 targets for 600 yards and 5 touchdowns last year. Shenault also had 18 rushing attempts for 91 yards. He played 64% of the offensive snaps and finished as a WR3 or better in 86% of his active games in PPR formats.

The Jaguars’ offense was dismal in 2020. Jacksonville ranked 27th in yards per game (326) and 30th in points per game (19). Things will improve for the franchise in 2021. Meyer has a reputation of being an offensive innovator who is willing and able to adjust. The Jaguars have 240 available targets.

Johnson (285), Maclin (229), and Wallace (249.6) all went on to have excellent sophomore seasons in PPR formats. This trio averaged 121 targets, 69 receptions, and 1,184 receiving yards. Lockett finished with only 66 targets and 124 fantasy points. This provides you with a glimpse of the range of outcomes for Shenault in 2021.

Ja’Marr Chase opted out last season to begin preparing for his NFL career. He produced a legendary campaign at LSU in 2019, catching passes from quarterback Joe Burrow. Chase reeled in an inconceivable 84 receptions for 1,780 receiving yards. In case you were wondering, that was a reference to the 1987 classic film The Princess Bride.

Chase was the most productive receiver on an LSU team that birthed the most prolific rookie wide receiver season in NFL history with Justin Jefferson. The Bengals currently have 195 vacated targets. Burrow will feed his old college teammate all the targets he can handle.

Odell Beckham Jr., Mike Evans, Kelvin Benjamin, and Jefferson are the only wide receivers selected in the first round of the NFL Draft over the last decade to score 225 or more PPR fantasy points in their rookie seasons. They averaged 130.7 targets, 80 receptions, and 1,191 receiving yards. This type of statistical production is in the realm of possibility for Chase in 2021.

Amari Cooper and CeeDee Lamb are two names that immediately come to mind when someone mentions the Dallas receiving corps. In 2020, Gallup played with four different quarterbacks and was still productive. He accumulated 843 receiving yards and scored 5 touchdowns.

Gallup (106) finished the season with 3 fewer targets than Lamb (109). The fourth-year wideout also excels at contested catches. Gallup, Cooper, and Lamb could all exceed 100 targets and 1,000 receiving yards with quarterback Dak Prescott back under center.

Reagor didn’t meet the expectations of fantasy managers during his rookie season. He battled multiple injuries early and only finished with 31 receptions for 396 receiving yards and a touchdown.

There are reasons to be optimistic about Reagor entering his sophomore season. The Eagles have a new head coach in Nick Sirianni and subsequently a new coaching staff. They’ll do a better job positioning Reagor for success in 2021. Additionally, rookie DeVonta Smith will take some of the defensive attention away from the second-year pro.

Reagor is better suited as a No. 2 receiver. It was also revealed that he’d have an opportunity to move in the slot this season. The thought of Reagor having a mismatch inside against nickel or dime cornerbacks should have you salivating like a dog in front of a meat market.

Jalen Hurts and Reagor also developed a rapport as rookies. Were you aware that 12 of his 31 receptions for 174 receiving yards came from Hurts in the last five games of the season? Reagor could receive around 100 targets this season. He can be viewed as a high-end WR4 in PPR formats. Furthermore, Reagor could flirt with WR3 value if the Eagles trade tight end Zach Ertz.

The Lions have a new coaching staff, a new starting quarterback, and new wide receivers. They also have the most available targets (360) of any NFL team. Many fantasy enthusiasts gravitate toward tight end T.J. Hockenson in drafts but don’t forget about Tyrell Williams. New Lions offensive coordinator Anthony Lynn has a history with Williams while with the Chargers.

He’s been a capable deep threat throughout his career, averaging 13 air yards per target (air yards indicate how far a pass traveled in the air before being caught). Williams could see north of 100 targets in Detroit this season. The only Lions player who might see more is Hockenson. Williams has every opportunity to be one of the top fantasy football sleepers in 2021.

Tumbleweed, crickets, tumbleweed — oh my gosh, is that a viable tight end for my fantasy lineup?!?!

The Saints brought Trautman along slowly during his rookie season. The soon-to-be second-year tight end only played 15 snaps in the first two games and hauled in 3 receptions through the first six games. Trautman developed into a reliable blocker for the Saints and displayed flashes of his playmaking ability as the season progressed. He only caught 15 of 16 targets, but Trautman finished third among rookie tight ends in receiving yards (171).

Trautman became the first Dayton football player drafted in 43 years and the highest-drafted player from the Pioneer Football League. He’s exceptional at creating yards after the catch and has the advantage to win 50/50 balls due to his frame. The former Flyer is comparable to 49ers tight end George Kittle in those ways. Trautman walked into a tight-end-friendly scheme in New Orleans. The release of Jared Cook and Josh Hill earlier this year opens the door for him to prosper this season.

You may have some trepidation to invest in Trautman because future Hall of Fame quarterback Drew Brees isn’t under center in New Orleans. He can still thrive in 2021, whether Jameis Winston or Taysom Hill is named the starter.

It’s still head coach Sean Payton’s offensive scheme. New Orleans ran 295 offensive plays with two or more tight ends on the field in 2020. This equated to 27% of their offensive plays and increased roughly 5% from the prior season.

Tight ends have been actively involved in Payton’s offense on a per-game basis since arriving in the Crescent City for the 2006 season. The position has averaged 8 targets, 5.3 receptions, 59.4 receiving yards, and 14.6 PPR fantasy points per game.

There is no need to overcomplicate Trautman’s situation. He’s in a position to see a significant role in the offense as the Saints have 174 available targets.

Keep Reading! Julio Jones Fantasy Impact: What can we expect from this Titans offense?

Be sure to follow us on Twitter (@PFN365) to stay current with all things around the NFL and the upcoming 2021 fantasy football season beyond sleepers. Also, continue to visit Pro Football Network for NFL news and in-depth analysis while also visiting our fantasy football section for more coverage and up-to-date rankings.