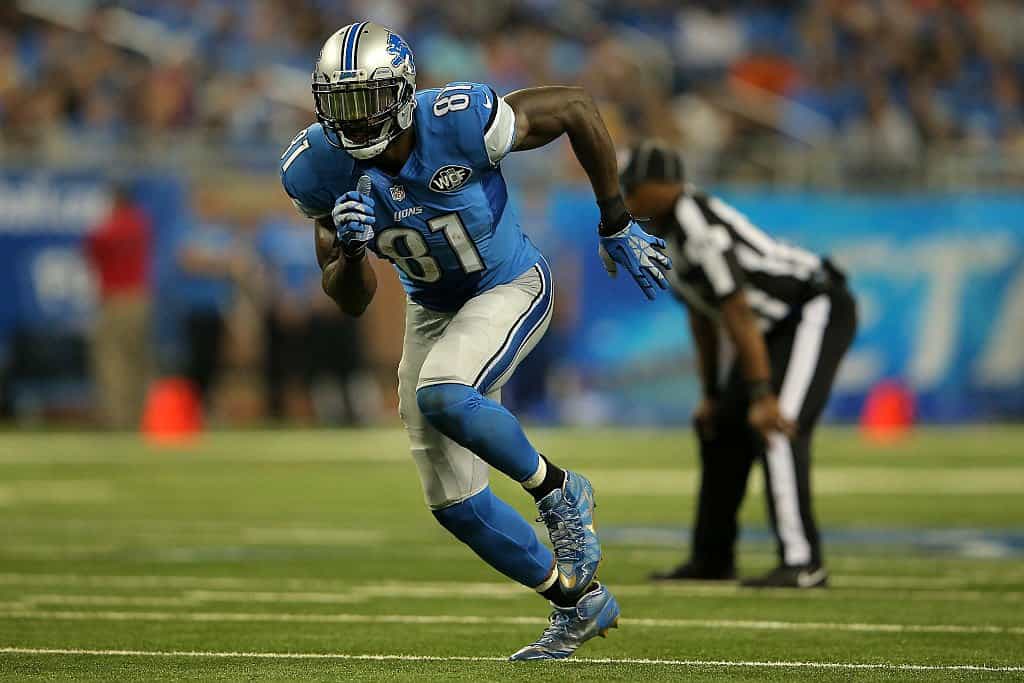 DETROIT, MI - SEPTEMBER 27: Wide receiver Calvin Johnson #81 of the Detroit Lions leaves the line of scrimmage against the Denver Broncos at Ford Field on September 27, 2015 in Detroit, Michigan. The Broncos defeated the Lions 24-12. (Photo by Doug Pensinger/Getty Images)
What's in this article? Click to show
Calvin Johnson was a receiver we had never seen before
While a short career, Calvin Johnson put up Hall of Fame-worthy numbers
What is the ‘Calvin Johnson rule’?
Why did Calvin Johnson retire?
Calvin Johnson is a first-ballot Hall of Famer
Want more NFL news and analysis?

When you become what the next generation of players are judged against, you know you changed the landscape of the NFL. That is what Detroit Lions WR Calvin Johnson accomplished and why he will now be inducted into the Pro Football Hall of Fame in 2021.

Calvin Johnson was a receiver we had never seen before

Using statements like this can sometimes come off as hyperbole and get overused rather quickly. When it comes to Calvin Johnson and what he did, I believe it is more than warranted.

Calvin Johnson came into the NFL after breaking nearly every record at Georgia Tech. From 2004 to 2006, Johnson had 2,927 yards and 28 touchdowns — both school records. He set the single-season record for yards in a season with 1,202 (2006) and 100-yard games (13). Johnson was a two-time All-American, first-team Freshman All-American, three-time first-team All-ACC. He also won both the Biletnikoff and Paul Warfield Trophies in 2006.

If that wasn’t enough, what he did at the NFL Combine dropped everyone’s jaws. Johnson measured in at 6’5″, weighed 239 pounds, and threw down a blistering 40-yard dash at 4.35 seconds. He followed it by then jumping out of the RCA Dome with a 45-inch vertical and a 139-inch standing broad jump. We had never seen someone with that size run that fast or be that explosive.

Sitting with the second pick overall, the Detroit Lions couldn’t let Calvin Johnson slip past them in the NFL Draft. What followed was one of the most dominating careers ever for a wide receiver.

While a short career, Calvin Johnson put up Hall of Fame-worthy numbers

Few players transcend the position they play as Calvin Johnson did in his nine years in the NFL. The combination of size, speed, route running, and body control was what you could only come up with if you were creating a character in the latest year of Madden.

Johnson spent his entire nine-year career in Detroit, where he played in 135 total games. Knowing the length of his career makes his stats even more ridiculous.

He caught 731 of his 1,312 targets for 11,619 yards and 83 touchdowns. That’s an average of 87 receptions, 1,377 yards, and 10 touchdowns a season. During his time in the NFL, no one caught more passes, had more yards, or averaged more yards per reception than Calvin Johnson.

Related | Who is David Baker? President of the NFL Pro Football Hall of Fame

His 5,137 receiving yards from 2011 to 2013 are the most over a three-year stretch in NFL history. He even had a rule named after him due to an infamous play. It was aptly named the “Calvin Johnson rule.”

What is the ‘Calvin Johnson rule’?

In fairness, the rule is not actually named the “Calvin Johnson rule.” That is just how a lot of people like to refer to it.

Allow me to take you back to Week 1 of the 2010 NFL season and paint the picture.

Jay Cutler has just led the Bears down the field and threw a touchdown to his favorite target of the day, RB Matt Forte, who has scored his second TD and has 151 yards receiving. The Bears just took the lead 19-14 with less than a minute on the clock.

Shaun Hill is leading the Lions after Matthew Stafford injured his shoulder when his arm was hit during a throw. He drives them down the field and has the Lions at the 25-yard line of the Bears.

With 31 seconds left on the clock, Hill fakes the handoff to then-rookie Jahvid Best. Calvin Johnson runs a nine route and picks the ball out of the air over the top of Bears CB Zack Bowman. It was a catch that would be the number one spot on the “You Got Moss’d” segment.

Johnson makes the catch, gets both feet down, and eventually is on his backside with the ball firmly in his right hand. As he rolls over to get up, the ball comes out as he is essentially putting it on the ground when getting up to celebrate what he and everyone else believes is a game-winning touchdown.

However, after being ruled a touchdown on the field, it was reversed to an incomplete pass after the replay. They said that Calvin Johnson did not “complete the process of a catch.”

From that moment on, what determined the process of the catch was referred to as the “Calvin Johnson rule” up until it was changed in later years to simplify the definition. However, the NFL has yet to be consistent with the ruling, if we are honest. To this day, Calvin Johnson wants the NFL to go back and change the records and give him back his touchdown.

This was just another one of the chapters in the incredible but short career of Calvin Johnson.

Why did Calvin Johnson retire?

When you are Calvin Johnson’s size, you play a physical brand of football. Everyone feels the need to give you their best shot to take you down. Unbeknownst to the public, Johnson knew 2015 was going to be his final season.

His body was so beat up after the abuse that after the 2014 season, when the Lions went 11-5 before losing to Dallas in the playoffs, he considered walking away after just eight seasons.

Calvin Johnson’s father is the reason he played in 2015

“After that season, I went home and told my dad — I tell this story all the time — I was like, ‘Man, I don’t think I can do it anymore. My body, it’s not fun anymore. Just the pain, just out here running all the time. I just can’t do it. It’s taken its toll and sucked all the energy out of me, out of life,’” Johnson said.

Despite his body showing the signs of an elite NFL career, Calvin Johnson still had a phenomenal season. He played in all 16 games, catching 88 of his 149 targets for 1,214 yards and 9 touchdowns.

Calvin Johnson is a first-ballot Hall of Famer

The elephant in the room and what may have kept Calvin Johnson out of the Hall of Fame could very well have been the length of his career. Razor-thin margins separate the best of the best.

There were questions as to whether this could be enough to keep him out of this year’s class. But, those questions were answered when Calvin Johnson was officially named an inductee to the Pro Football Hall of Fame.

Few players dominated the game the way he did and changed how we view the alpha receivers. He raised the bar for the new generation. Megatron became who younger players aspired to be when they hit the big stage. At the end of the day, if we consider legacy and the impact someone had on the game, few players can stand up the measuring stick that is Calvin Johnson.