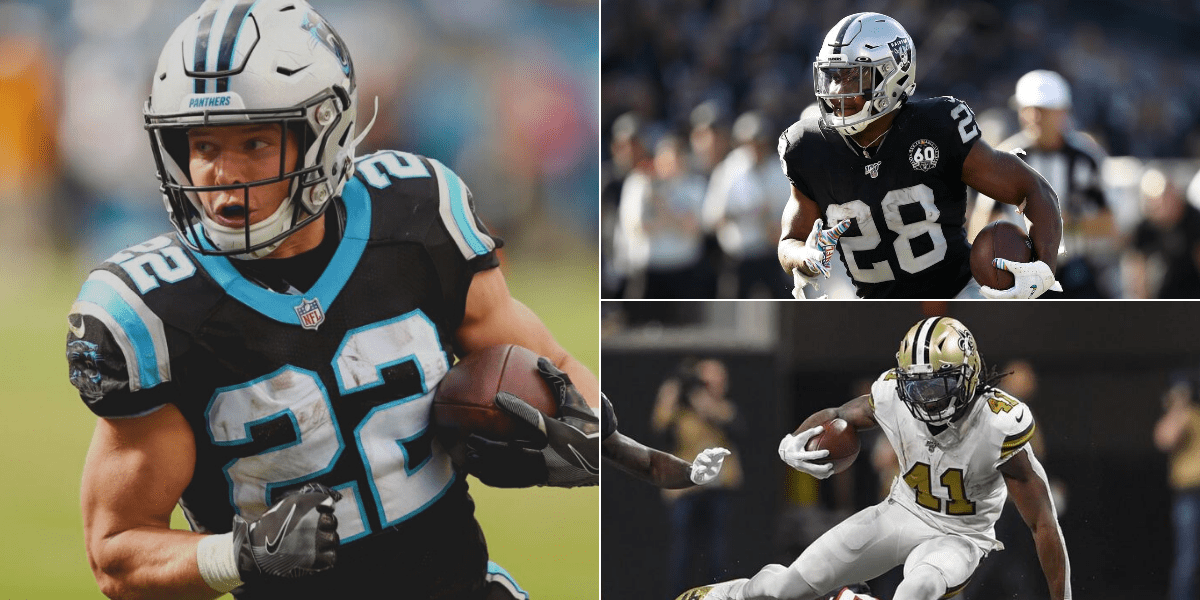 The top 10 running backs in the NFL

Jones is highly unlikely to reach 16 rushing touchdowns again and yes, Green Bay used an early pick on AJ Dillon, but he is still an excellent overall talent. Much like Alvin Kamara, Jones may never be a true bell cow at the running back position. That being said, does it really matter when he influences the game as much as Jones does in both the running and receiving game?

It is somewhat frustrating that Jacobs, a very good receiving back at the college level, wasn’t used more in the passing game during his rookie season. That could be on the horizon for Jacobs and if it occurs, he could rocket up this list.

Jacobs played through injuries last year but has proven to be one of the league’s best pure runners already. Jacobs’ 88.5 rushing yards per game were amongst the very best in football last year. Now hopefully he can add to that resume as a pass-catcher.

On their best days, Mixon is more talented than Gurley. And in Zac Taylor’s second season as a head coach, we could see Mixon flourish much as Gurley did with the Los Angeles Rams while Taylor was there. In fact, Mixon’s numbers really spiked to finish the year last season.

You would like to see him catch more than 35 passes, but Mixon is the total package physically for the running back position and could be primed to advance even higher on this top NFL running backs list after the 2020 season. Just imagine if Mixon were, say, on the Dallas Cowboys these last few years.

Derrick Henry and Ezekiel Elliott are the only two that ran for more yards than Chubb last year. Chubb is a somewhat limited receiver with the potential to improve in that area, but he is a rare ball carrier with a fantastic combination of balance, power, vision, burst, as well as long speed and elusiveness.

Henry isn’t for everyone. But he sure is for the Titans and Tennessee has not only built their offense around Henry, the NFL’s leading rusher in 2019, but just extended his contract. Expect Henry to get a little more involved in the Titans’ screen game going forward. And how about this – over Henry’s entire career, he averages 5.82 yards per carry when Tennessee is playing with a lead. He’s a closer, which is a reason why he’s ranked sixth in this top NFL running backs list.

The top 5 running backs in the NFL

Over his three-year career, Cook has only played in 28 regular season games. That is a huge concern, but it is also really the only negative thing you can say about this guy. As a player and when out there between the lines, Cook is one of the very best in the business and is the focal point of Minnesota’s offense.

Kamara didn’t have quite the same amazing electricity, balance, burst, and power that he has shown throughout his career in 2019. But that was because of injuries. The Saints know that Kamara needs to be spelled, but he is an extremely special player nonetheless that opposing defenses have little to no answer for.

Only Henry rushed for more yards than Elliott last year. Elliott has been remarkably consistent in this area, averaging 96.5 yards per game on the ground for his outstanding career. He led the NFL in this metric his first three years in the league. What is a little frustrating though is that Dallas has yet to use Elliott to his full capacity as a receiving threat. Hopefully, that changes with Mike McCarthy now in charge.

There hasn’t been a better running back prospect coming out of college than Barkley, who is an absolute freak specimen. Many consider 2019 a down season for Barkley. But this gets overlooked – Barkley racked up 539 yards from scrimmage over his final three games in 2019 after finally getting healthy from his high ankle sprain. However, one area the Barkley simply must improve in that isn’t brought up enough is pass protection. He can be an all-time great and a top running back for years to come.

What an amazing season McCaffrey just had, racking up 1,387 rushing yards and over 1,000 yards as a receiver last year (and only Michael Thomas caught more passes). He found the end zone 19 times while logging more snaps than any running back in the NFL. This is a primary reason why McCaffrey is the top running back in the NFL heading into the 2020 NFL season.

While that might go down as McCaffrey’s best year of his career, his fit with the Panthers’ new coaching staff is excellent. Joe Brady goes from Alvin Kamara in New Orleans to Clyde Edwards Helaire at LSU to McCaffrey at Carolina as amazing do-it-all weapons.