Although Derrick Henry was arguably the NFL's best running back last season, the contract the Titans have given him does not reflect that.

By Lucas Ellinas
July 21, 2020
What's in this article? Click to show
The Titans should have given Henry a contract befitting one of the NFL’s best running backs
Examining Henry’s play using PFN’s Offensive Share Metric
Based on the above statistics, Henry’s contract is clearly very favorable for the Titans

Derrick Henry dominated the NFL last season. To say that he single-handedly carried the Tennessee Titans to the AFC Championship game would be an overstatement, but he was undoubtedly a major contributing factor. Last Wednesday, Henry signed a four-year, $50 million contract extension to stay with the Titans. That makes him the fifth-highest paid running back in the NFL.

However, while that sounds impressive, it significantly undervalues Henry’s contributions to the team, making the contract highly favorable for Tennessee.

Next season, Henry will make less money than four other running backs: Christian McCaffrey, Ezekiel Elliott, Le’Veon Bell, and David Johnson (who will somehow be making $13 million next season). Depending on who you ask, Henry was either the best or the second-best running back in the NFL last year — the fact that he’s rounding out the top five in RB contracts is somewhat strange, a happy problem for the Titans organization.

His primary competition for that title was McCaffrey, who was the only player to break 2,000 yards from scrimmage last season, a feat he accomplished by almost 400 yards. As a complete running back, it is difficult to say that anyone is better than McCaffrey. What he does as a receiver is truly incredible, and no other running back really comes close to him in that regard.

However, when looking purely at his ability as a runner, Henry is unmatched. He was the NFL’s leader in terms of rushing yardage in 2019 (1,540) and tied for the lead in rushing touchdowns (16). Based solely on those statistics, you would think that the Titans would give Henry a contract befitting the best, or at least the second-best, running back in the NFL. Instead, four players at the position will make more.

As impressive as Henry’s performance last season was, statistics aren’t everything. Not every player with incredible numbers is actually the most valuable player in their offense.

However, using PFN’s Offensive Share Metric (OSM), which was created to measure how much impact a player had on their own statistics and, by extension, their entire offense, we can examine Henry in a more nuanced manner.

According to the OSM, Henry was the most valuable rusher in the NFL last season. He received the highest OSM grade of any running back at 21.27. That easily eclipsed the grades of all four running backs who will be higher paid next season, as you can see in the chart below.

OSM grades for running backs do not account for receiving statistics, so this comparison isn’t perfect, especially in McCaffrey’s case. But clearly, Henry was the best rusher of the group, which is his primary role with the Titans.

Explaining why Derrick Henry graded so far above his competition

Henry’s high grade was primarily the result of the combination of two metrics: The percentage of time he faced eight or more men in the box, and his efficiency rating. That first metric should be reasonably self-explanatory – it looks at how often a running back saw eight or more defenders around the line of scrimmage when they were on the field.

The second requires some more explanation if you aren’t a frequent reader of OSM articles here at PFN. The efficiency rating is the number of yards of physical distance a player ran on the field for each statistical yard they gained. Ideally, you want players to have a low-efficiency rating because that indicates that they were more efficient with their movement.

With the explanations out of the way, let’s look at how Henry performed on these two metrics. To begin, he faced eight or more defenders around the line of scrimmage 35.31% of the time, the fifth-highest percentage in the NFL. But despite that high level of resistance, he still managed the third-lowest efficiency rating of any running back, at 3.45.

In short, he was one of the NFL’s most efficient runners, despite being placed in more difficult situations than almost any other player at his position.

Taking a closer look at Henry’s season, we can see that he consistently performed at a high level. The chart below shows his OSM grades from week to week, marked as the black dots. The yellow line represents the league average OSM grade for running backs during the regular season. 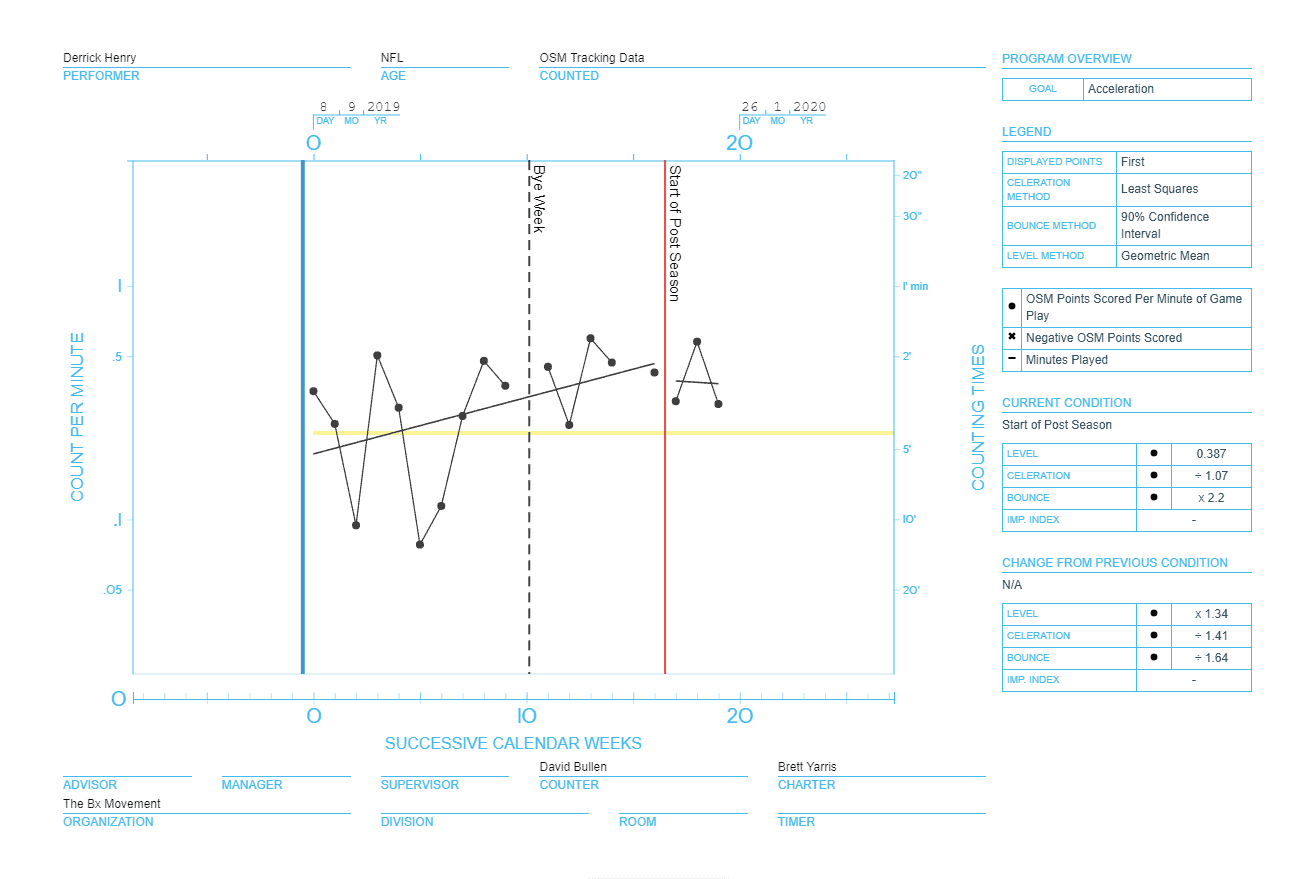 Derrick Henry’s 2019 statistics were not a fluke

If Henry’s success was limited to last season, maybe the contract the Titans gave him would make more sense. But he has been a dominant force in the NFL for years, something that was recently addressed here at PFN. To further illustrate this point, look at the chart below, which shows his grades from 2016 to 2018.

Year after year, Henry’s advanced metrics show that he is one of the NFL’s most valuable running backs. Last season might have been his most successful in the NFL statistically, but he has been playing at a high level ever since he arrived in the league.

Based on the above statistics, Henry’s contract is clearly very favorable for the Titans

The point of this article is not to suggest that Henry should 100% have been made the NFL’s highest-paid running back. Once again, McCaffrey is one of the league’s best players. But the general trend in the NFL is that players close to the peak at their positions will receive a larger contract than the previous highest at that position.

And Henry was one of the most statistically successful running backs last season, and the manner in which he achieved those statistics was incredibly efficient. For him to be paid less than players like Elliott and Bell, who he undeniably outperformed in 2019, is phenomenal for Tennessee. The fact that he will be making less money than Johnson is probably a sign of the apocalypse.

Related | OSM Back to the Future: Derrick Henry’s performance from 2016

Admittedly, this argument is not one that I would usually make. I firmly believe in the general theory that most running backs are replaceable in the modern NFL. Therefore, I think paying them big contracts is generally a bad idea.

Henry is one of the few exceptions. His statistics were incredible, and even if you ignore those, he was the backbone of Tennessee’s offense in 2019. The scheme would not be able to function without him. The Titans getting away with paying anything less than the absolute premium at the running back position for a player that was so crucial to their offense is an absolute steal.