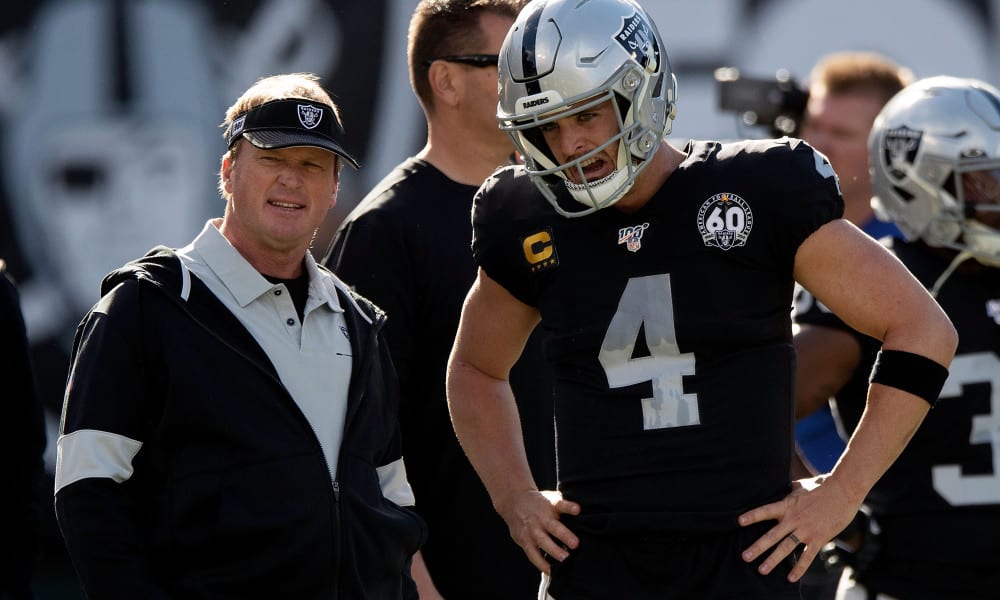 After a promising 6-4 start to the 2019 regular season, the Las Vegas (then Oakland) Raiders faltered down the stretch, losing five of their last six games, and finding themselves out of the postseason for the 3rd consecutive year. Concerns over QB Derek Carr’s long-term status with the team were only heightened with the signing of former Tennessee Titans QB Marcus Mariota. Did the Raiders make enough moves to improve? Will the starting QB be Carr or Mariota at the 2020 NFL season’s end? Will the Las Vegas Raiders go over or under their 2020 win total of 7? Let’s dive in and find out.

Changes to the Raiders’ roster in 2020

Below is a list of players the Raiders added via the draft and free agency.

Carr received a plethora of new weapons in the draft in Henry Ruggs III, Lynn Bowden, and Bryan Edwards. They also, however, signed a potential quarterback replacement in Mariota. Whether or not Carr can play well enough to retain his starting job is the biggest question this franchise has.

Las Vegas had just two losses that aren’t worth mentioning (LB Tahir Whitehead and CB Daryl Worley). Yet, here I am, telling you about them anyway.

What defensive changes can we expect from the Raiders in 2020?

To say the Raiders’ defense was inept in 2019 would be an understatement. They surrendered 5.9 yards per play (3rd highest average in the league), ranked 30th in Football Outsiders pass defense DVOA and 27th in their adjusted sack rate metric.

Their ineptitude was no secret, as they made several additions to their defense via free agency. The most notable of which is LB Corey Littleton, who is a quality coverage linebacker.  Maliek Collins’s 21 pressures would’ve ranked second in Oakland in 2019, while Carl Nassib’s 17 pressures were good enough for 3rd most on the team according to Pro Football Reference’s advanced defensive stats.

Maxx Crosby’s 31 pressures more than doubled that of 4th overall pick Clelin Ferrell’s 15. The Raiders might have a quality pass-rush unit to aid them in going over their 2020 season win total.

As for the draft, the Raiders spent a first-round pick on cornerback Damon Arnette, who you can read more about via Tony Pauline’s draft rankings.

What offensive changes can we expect from the Raiders in 2020?

According to Sharp Football Stats, the Raiders ranked 4th in passing success rate and 12th in explosive passing success rate. However, when you have to face the Kansas City Chiefs and Patrick Mahomes twice a year, you can never have enough offense. The Raiders seem to have adopted this approach, selecting three receivers with their first five picks in the 2020 NFL Draft.

Jon Gruden wants to be a run-first team, evidenced by his 55/45 early-down Rush/Pass ratio in 2019. Those rates were when the score was within eight points or fewer. In other words, when the Raiders weren’t forced to be pass-heavy or were in a position to milk the clock. They averaged a 49% success rate when doing so, which was slightly above the league average mark of 46.3%. As long as second-year RB Josh Jacobs has this mammoth offensive line in front of him, he should continue to lead an effective ground game.

Will Marcus Mariota replace Derek Carr in the 2020 season?

That is the $9.2 million question. One of two things rings true regarding Mariota; he never fully recovered from his elbow injury, and it has ruined his career, or he just simply can’t play. Maybe I’m wrong, but it would explain why he had been so ineffective before his benching for Ryan Tannehill.

Carr wasn’t overly responsible for his production within the confines of the offense, according to PFN’s Offensive Share Metric. Carr ranked as QB26 out of 38 qualifiers. Ironically, he ranked one spot ahead of Mariotta. OSM is not a ranking tool. Instead, by focusing on aspects only the player can control, it tells us how much of a player’s production in which he was responsible. It’s a long-winded way of saying Carr’s output can be mostly attributed to the offense around him, and not his play.

Even if Carr struggles and gets benched, there is no guarantee Mariota retains the job. The job is Carr’s to lose, in my opinion. When evaluating the Raiders 2020 win total and betting props, we have to project them as if Carr is the year-long starter.

What obstacles will the Raiders face from their 2020 schedule?

The Raiders 2020 Strength of Schedule, via @SharpFootball pic.twitter.com/qaUFhjdeYb

Overall, the Raiders schedule rates as the 4th hardest in the league. The first seven weeks pose the biggest challenge to the Raiders 2020 win total. It dies down after that, however. The schedule might be easier than it appears. I count nine games where it could be argued they are not at a disadvantage at QB: Carolina Panthers, Buffalo Bills, Cleveland Browns, Los Angeles Chargers (x2), Denver Broncos (x2), New York Jets, Indianapolis Colts and Miami Dolphins.

While the QB’s they face are beatable, let’s take a look at some advantageous/disadvantageous scheduling spots.

As far as rest goes, the Raiders somewhat caught a break. There are two games where the Raiders enjoy extra rest; Week 7 vs. Tom Brady and the Tampa Bay Buccaneers and Week 16 vs. Miami.

The one instance where they will be at a rest disadvantage is Week 11 vs. Kansas City. The Raiders have two east coast trips on the docket for their 2020 schedule; Week 1 at Carolina and Week 3 at the New England Patriots.

Let’s not ignore the cold-weather games either. Carr struggled in games where the temperature was below 50 degrees last season, going 0-3 and averaging just nine points per game. He lost both cold-weather games in 2018 as well, scoring only 16 and nine points in the process. Their yards per play figures were, for the most part, pedestrian: 5.0, 4.5, 3.6, 5.8, and 6.8.

Some scheduling spots that aren’t represented in the graphic above include a shortened Week 3 after hosting the New Orleans Saints on Monday Night Football in Week 2. Denver could also enjoy an extra day of rest before their Week 17 matchup, as the Broncos Week 16 bout with the Chargers is a flex-in option for the late-season Saturday slate.

How will analytical regression affect the Raiders 2020 win total?

Las Vegas’ yards per play differential of 0.0 suggested they were a slightly below league average (0.2) team, while their point differential of (-106) said they were nowhere near average. One regression metric the Raiders have in their favor is Football Outsiders adjusted games lost metric. They were the 7th most injured team in 2019, a figure that usually regresses to the mean year-to-year.

That said, they had no business winning seven games in 2019, yet here we are.

Are there any bets worth making on the Raiders 2020 win total?

The Raiders 2020 win total is set at exactly seven with (-110) vig on both the over and under at Draftkings. FanDuel sportsbook has over 7.5 wins at (-105) and under 7.5 at (-115). Betting on teams that outperformed their Pythagorean win total the year before to go under the following season has been remarkably profitable in the win totals market. We also can’t forget the four potential cold-weather games Carr could face.

I can’t suggest their under with supreme confidence, however. The Raiders offensive line returns all five starters and is arguably the best unit in the league. They made several improvements to their pass rush and secondary, and have continuity at QB and Head Coach, which is even more valuable given the current worldwide circumstances.

While Carr isn’t a world-beater by any means, his knowledge of the system will be invaluable given the lack of a full offseason and training camp. Also, I touched above how there are nine games on their schedule where they aren’t necessarily at a disadvantage at the QB position.

Las Vegas owns a terrific offensive line, stable QB, maintains the same offensive system from 2019, and improved their pass defense pretty significantly, in my opinion. I’m a “data guy” first, but even I am having trouble getting excited to bet the under on the Raiders 2020 win total, despite their less than stellar 2019 advanced metrics.

I think the most likely outcome here is the Raiders winning eight games. If you can find a sportsbook that offers over 7.5 at +100 or better, I would take it. I am a little less excited at the over 7.5 (-105) that FanDuel is offering, but if you HAVE to bet this win total, the over is the direction I would lean given their current odds.

I also lean to the “yes” on their “will they make the playoff prop?” at +250 (28,57% implied probability) on FanDuel. The only sure things in the AFC are the Chiefs and Baltimore Ravens. Everything else is up for grabs, and there’s no reason the Raiders can’t be one of the three wildcards we will get this season.

Bets: None, lean over, lean “yes” on playoff prop

James Aguirre is a betting and fantasy analyst at the Pro Football Network (@PFN365). For all of our up-to-the-minute picks and analysis, follow the betting group @PFNBets and James @James_AG1