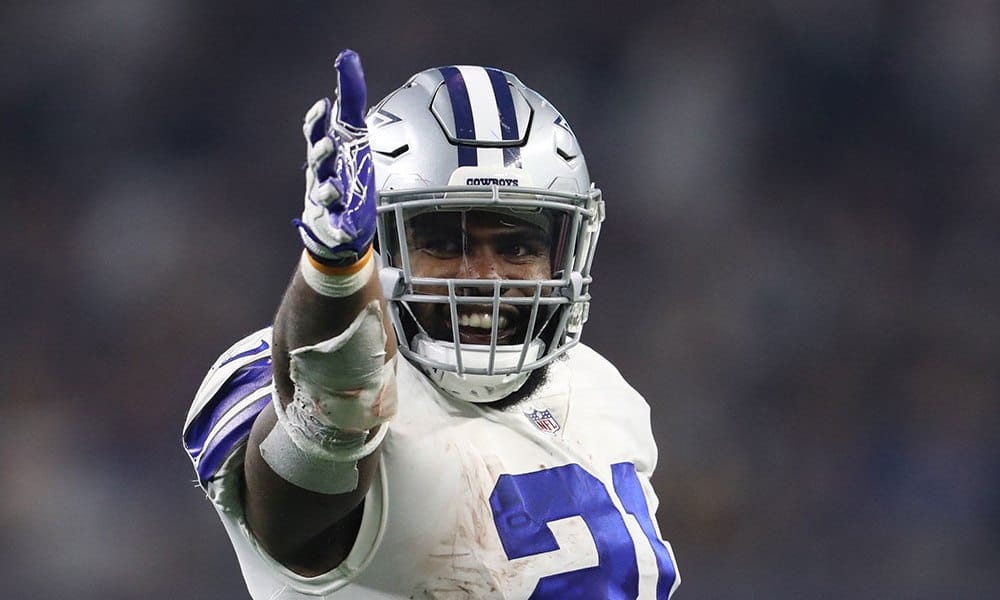 A disgruntled Ezekiel Elliott took to Twitter this week to defend his career record in the NFL. Upset with the insinuation in an ESPN article that he isn’t a top-10 running back in the league, Elliott claimed to have “dominated year in, year out,” and he suggested that the media “go do your homework.”

Armed with the Pro Football Network Offensive Share Metric (OSM) and NFL Next Gen Stats, I set about the homework assignment of ascertaining how dominant Elliott has been in his career.

The dictionary defines the verb dominated as “to occupy a commanding or elevated position.” A cursory glance over the box score and statistics would suggest that “dominated” is the perfect word to describe the impact that Elliott has had in the NFL during his short career.

How dominant has Elliott been in his Cowboys career?

Drafted out of Ohio State by the Cowboys with the fourth overall pick of the 2016 NFL Draft, Elliott set about exerting his dominance in the league immediately. He claimed the rushing title in his rookie year with an impressive 1,131 rushing yards and an eye-opening 15 touchdowns.

Elliott fell short of consecutive 1,000-yard seasons in a suspension shortened 2017 before reclaiming his crown as king of the ground game with 1,434 rushing yards in 2018.

After exerting his dominance on the field for Dallas, Elliott went to battle with the Cowboys’ front office to be financially recompensed for his value to the team. Threatening to hold out for the 2019 season, Elliott prevailed in a contract dispute and became the highest-paid running back in NFL history with a $90 million contract extension.

Despite an off-season spent away from the team, Elliott still racked up the third 1,000-yard rushing season of his career. He finished the season behind Derrick Henry, Nick Chubb, and Christian McCaffrey. Both McCaffrey and Henry put pen to paper on big-money deals recently, with McCaffrey breaking Elliott’s record for the highest-paid running back in the NFL.

With Saquon Barkley also emerging as one of the NFL’s most explosive backs, the article from Jeremy Fowler implied that Elliott is no longer viewed as THE dominant running back in the NFL.

There are a lot of great backs in this league but I don’t understand why the media has to talk down on my game just to uplift other backs. We all are talented football players and can ball.

One offensive coordinator suggested that Elliott isn’t even in the top 10.

It seems outrageous to suggest that a running back who has twice led the NFL in rushing yards in a four-year career would be anything other than the best in the business. A more in-depth analysis shows that Elliott hasn’t been quite as dominant during his career as you, or even Elliott himself, might expect.

Check the stats. Since I entered this league I have dominated year in, year out. Put some RESPECT on my name.

It’s important to point out that OSM doesn’t attempt to rank players against each other. Rather, it attempts to show a player’s value to their own team. OSM uses several metrics to analyze how a player performs with the opportunities presented to them.

This is particularly pertinent to Elliott and the Cowboys. In both seasons that Elliott led the NFL in rushing yards, he also had the most carries. Last season, Elliott finished fourth in rushing yards despite having the second most carries in the league, just two behind league leader Henry.

While blowing away the competition in his rookie year, Elliott ranked as our RB11 with an OSM grade of 18.62. Although he received a grade above the running back average of 15.6 in 10 of his 15 qualifying games during 2016, his grade of 6.07 in his first career game indicates that his play was detrimental to the offensive success of the Cowboys.

Elliott OSM grade regressed over the next three years

In 2017, the suspension shortened season, he received an OSM grade of 18.32 (RB18). Like his rookie year, he graded above the running back average in two-thirds of his games.

He was RB18 again in 2018 with a grade of 16.08, and in 2019 Elliott received the lowest overall grade of his career — 15.05. Last season, Elliott received four grades that fell into the “poor” grade threshold, and only half of his games saw him achieve a grade above the league average.

If Elliott has been such a dominant force in the NFL during his career, why does his OSM grade not reflect this?

While he has led the league in rushing for two of his four years, Elliott hasn’t figured as prominently in several metrics that NFL Next Gen Stats use to determine successful running back play.

Due to his high workload for the Cowboys during his career, Elliott has never led the league in yards per carry (YPC).

Next Gen Stats determines running back efficiency as how many yards a player travels to gain a yard. Elliott was at his most efficient in 2019, ranking seventh out of 48 qualifying backs, traveling on average 3.49 yards to pick up one yard whereas he previously ranked as low as 23rd in past seasons, traveling 4.00 yards to gain a yard.

2019 may have been the most efficient season of Elliott’s career, but that was mitigated by the fact he faced the lowest percentage of 8+ man box defenses over his four years. He only saw a loaded box on 19.27% of his snaps, by far the lowest of his career.

Throughout his career, Elliott has never led the NFL in yards per carry, efficiency, or rushing touchdowns. In 2019, his run of leading the NFL in rushing yards per game was ended by Henry, who rushed for 102.7 YPG while Elliott’s 84.8 YPG saw him ranked fifth in the league.

But to say he has dominated year in and year out? That is a different matter entirely.