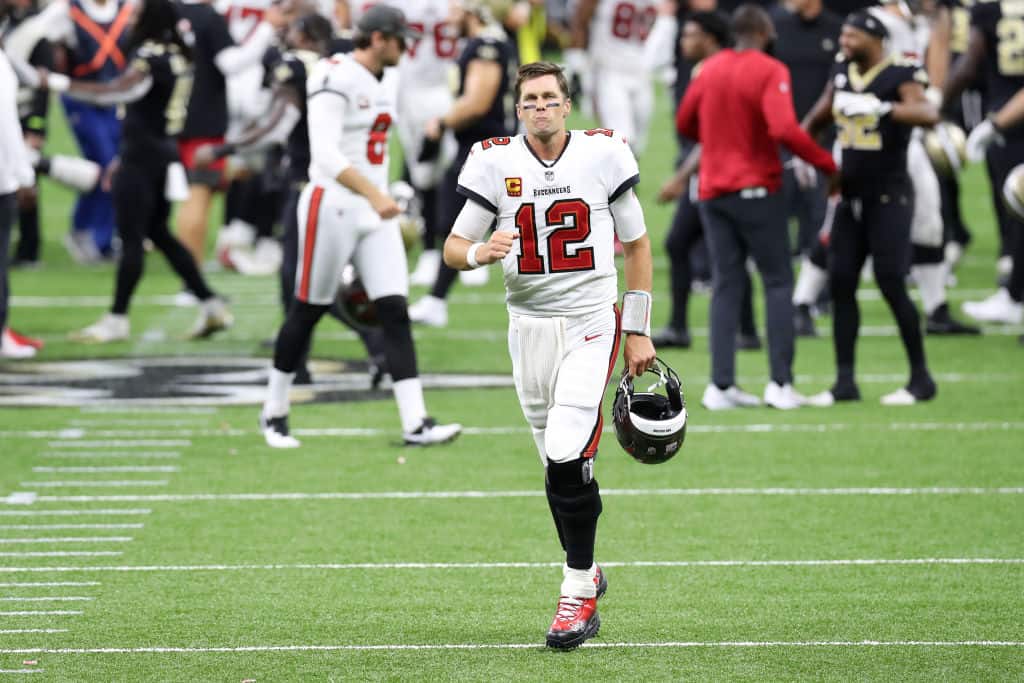 NEW ORLEANS, LOUISIANA - SEPTEMBER 13: Tom Brady #12 of the Tampa Bay Buccaneers leaves the field following a loss against the New Orleans Saints at the Mercedes-Benz Superdome on September 13, 2020 in New Orleans, Louisiana. (Photo by Chris Graythen/Getty Images)
What's in this article? Click to show
The offense is going to take some time to get going
The Bucs defense could be really dangerous
The Bucs are committed to Ronald Jones, for now

A season rife with anticipation and excitement started off with some frustration from fans and players alike on Sunday. The Buccaneers start their season 0-1 after a loss in New Orleans to the Saints. Hopefully, the initial wave of disappointment has dissipated for some. Here are a few takeaways from the Buccaneers Week 1 loss to the Saints.

The offense is going to take some time to get going

The Buccaneers offense has weapons all over the field. Mike Evans, Chris Godwin, O.J. Howard, and Rob Gronkowski headline a group that was one of the best in the NFL last year. When the Bucs added Tom Brady, they knew they were getting a good quarterback with arguably the best weapons he’s ever had.

The Bucs then added Leonard Fournette, and expectations for the 2020 Bucs soared into the stratosphere. This was going to be one of the best offenses the league had ever seen.

The gameday came, and the results weren’t exactly what everyone expected. That being said, for some, it wasn’t surprising. 2020 has been one for the ages, and it was that way before a single down had even been played. Due to the current global situation, the offseason was abnormal, to put it mildly. Hardly an offseason, no preseason football, and Brady was playing for a new team for the first time since the year 2000.

The Bucs looked out of sync on offense. Miscommunication and interceptions were bound to happen and more so in this specific situation. Brady is still Brady, but this offense is going to take a few weeks to realize its full potential. If it was Week 10, the conversation would be different.

The Bucs defense could be really dangerous

In stark contrast to the offense, the Buccaneers’ defense was better than expected. Although the front seven was one of the best in the NFL against the run in 2019, the secondary still had plenty of questions to answer. Keep in mind, the Buccaneers secondary is really young. In fact, Carlton Davis is the elder statesmen in the secondary with 27 games under his belt. Antoine Winfield Jr., a rookie from the University of Minnesota, started the first NFL game of his career on Sunday.

With their youth in mind, the young Bucs defense performed pretty well, given the circumstances. They were responsible for 27 points from a team with weapons everywhere on the field. The Saints got to play at home and had the added benefit of having been together for quite a few years now.

This Bucs defense fought back hard even when the offense put them in tough situations several times. The Saints averaged 28.6 points per game last year, ranking them third in terms of points per game. Alvin Kamara had the worst game of his career in terms of attempts to rush yards, and Michael Thomas had the least amount of receiving yards since Week 5 of 2017. It was in a losing effort, but don’t underestimate the Bucs defense this season. The defense has to be one of the biggest takeaways for the Buccaneers in their Week 1 loss to the Saints.

The Bucs are committed to Ronald Jones, for now

Bruce Arians stated multiple times throughout the offseason that Ronald Jones was “the guy.” But, this wouldn’t be the first time an NFL coach didn’t tell the whole truth. Add to that the signing of Fournette, and most assumed it was no longer the Jones show. Some of that was cleared up on Sunday as Ronald Jones had 17 carries and no other running back had anywhere near that, with Fournette racking up five carries on the day.

That could change next week, but for this week, Jones’s performance was just ok. He didn’t dazzle, but he gained hard-fought yards several times and averaged nearly four yards per carry. Additionally, Jones also had two catches on three targets. Overall, I’m sure the Bucs expect better moving forward, but if Week 1 is any indication, they’ll give Jones every chance to prove he deserves the job.

Oh, and don’t think Brady and company will forget Sean Payton going for the touchdown up nine. Week 9 can’t get here soon enough.