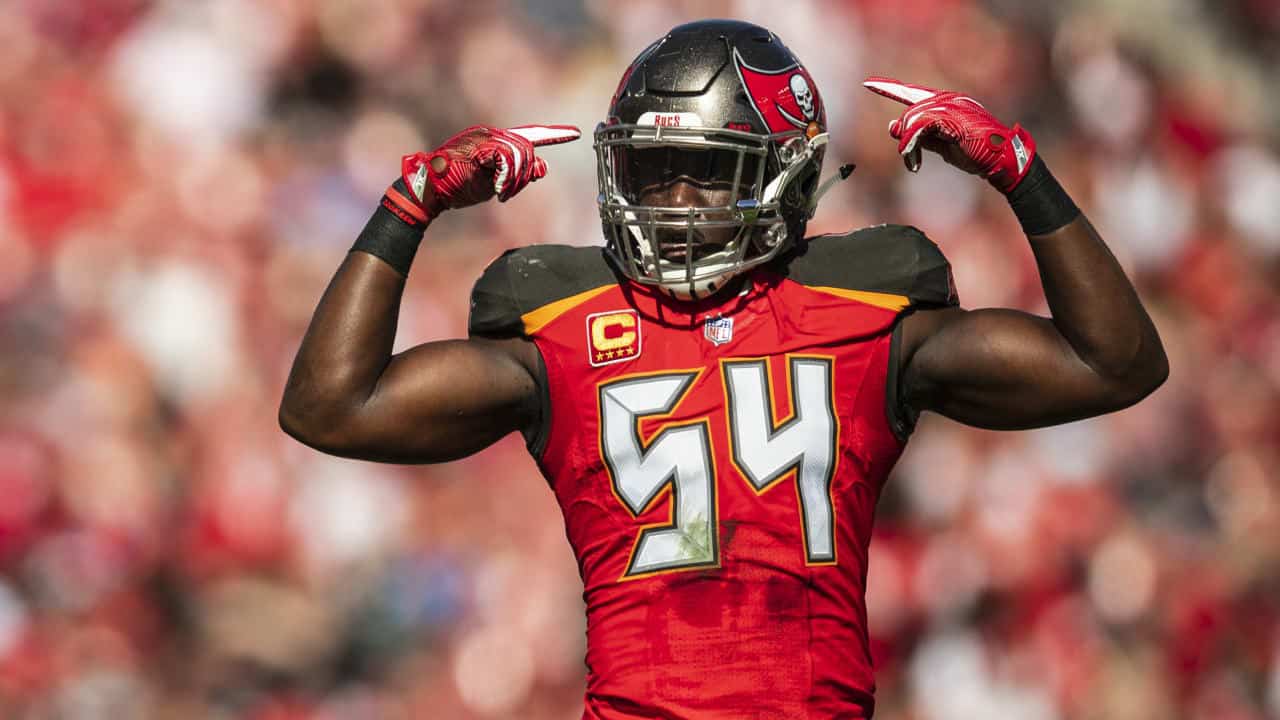 Photo Credit: Buccaneers.com
What's in this article? Click to show
Defensive line domination
Edge evaluation for 2020
Leaning on the linebackers on defense
Building the secondary
Buy into the Buccaneers hype?

Whoever won the Tom Brady sweepstakes was destined to be considered a contender. The six-time Super Bowl champion joined the likes of Bruce Arians and a dynamic duo at wide receiver to give the Tampa Bay Buccaneers a chance for a title. In reality, it’s not Brady nor the offense who will lead a postseason push, but rather the 2020 defense that will decide if January football is in their cards.

In his first season as defensive coordinator, Todd Bowles made the necessary adjustments to mold the unit in the right direction. Overall, the team struggled early, averaging 31.3 points allowed per game and roughly 270 yards through the air. A Week 12 victory against Atlanta showed potential as Tampa Bay rebounded and finished with the No.1 rush defense that allowed just 73.8 yards per outing.

Another year under the belt for the secondary could be promising, while the front line will return all seven starters. Bowles’ building blocks are in place for success, but the product has yet to be determined. Brady and the offense should put up points, but stopping opponents from scoring is the only way Tampa can jump to a front-runner role when games truly matter nearing season’s end in a competitive NFC South.

By midseason, everything clicked upfront in the new 3-4 scheme. Former first-rounder Vita Vea made highlights on both sides of the ball while Ndamukong Suh took control as Gerald McCoy’s replacement. The team brought back Suh on a one-year, $8 million deal to keep the unit intact through 2020.

The run defense made teams think twice about going to the ground. Carolina’s Christian McCaffery finished with only 68 combined yards in two games on 38 carries while New York’s Saquon Barkley only hauled in 10. Suh grabbed revenge on his former teammates in Los Angeles with a fumble returned for a touchdown while the unit turned Todd Gurley into a red-zone runner with 16 yards on the afternoon.

“I want to keep this front seven together,” Arians said earlier this offseason. “They’ve proven to be dominant.”

Perhaps the biggest surprise last season was William Gholston, who rebooted his career in the new scheme. Nearly quadrupling tackle total from 10 to 38, the veteran played a monumental role in run support with five stops behind the line of scrimmage. As a trio, the unit collected 114 tackles, 33 quarterback hits, nine pass deflections, six sacks, and four forced fumbles.

Related: Which three Buccaneers players have the most to prove in 2020?

Vea will need to improve as a bull-rusher up the middle. Weighing in at nearly 350 pounds, his speed, and brute strength should allow him to win most one-on-one matchups while disrupting any double team opportunities. His ability raw power up the middle should open lanes for Suh and Gholston to attack the edge, leading to highlight moments in the backfield.

Although no longer dominant pass rushers, the sack total for Suh and Gholston could increase with another year in the system. The Buccaneers finished eighth in sacks (47), but only 7.8% came from the front three. With more pressure coming inside, it only plays in favor of the defense ending the drive with a positive reaction.

Who else saw Shaquil Barrett having a breakout season? One year was all it took for the former Broncos situational pass rusher to transform into the league-leader in sacks with 19.5. Beyond that, Barrett’s production with 58 tackles, 37 quarterback hits, and two of his six forced fumbles being returned for touchdowns speaks for itself.

Related | The top 25 edge rushers in the NFL

The Tampa man himself, Jason Pierre-Paul, played second fiddle to Barrett but was still impressive on the opposite side. Pierre-Paul finished with 8.5 sacks, five coming in the final two games, to go along with 27 tackles and nine for losses.

Of the top 10 teams in sacks, the Tampa duo finished leading the way with 28 combined. Their biggest concern in entering a new year will be the depth behind Pierre-Paul and Barrett. Anthony Nelson is the only player with experience in Bowles’ scheme after finishing with eight tackles and a forced fumble. Quinton Bell or Kahzin Daniels could expand their roles with a strong camp, only solidifying the outside as more than just a two-person system.

Barrett, who will earn $15.8 million on the franchise tag, will be looking to keep that production up for an earnest payday come 2021. The biggest question is, can he duplicate that success in back-to-back years?

Leaning on the linebackers on defense

Perhaps the most underrated duo at the position, Devin White and Lavonte David are perfect compliments to each other’s game. Commanding the middle of the field, White as a rookie dominated as a tackler with 91 stops. David is still underappreciated as one of the league’s best and surpassed the 1,000-tackle mark before the age of 30.

The Bucs surprised some by drafting a linebacker No.5 in Arians’ first year. Then again, White was much more than just a gap-filler in the middle. He finished with three forced fumbles, four fumble recoveries, captured his first career interception, and scored a pair of touchdowns on the way to a memorable season. Always looking to improve, Arians hopes to see the LSU star become more well-rounded with his game — primarily in blitzing packages.

“We need Lavonte and Devin to continue to grow as pass rushers,” Arians said early in training camp. “Devin White (can) use his speed, maybe a counter move. I think he’s working on some stuff for it if we stick him out on the edge and let him come. He knows what he’s doing.”

White finished with only four tackles behind the line, 2.5 of which were sacks. David also underachieved in that category, with only 10 tackles for losses instead of his average 15. David’s veteran instincts fit better near the line to secure the stop. White, who tallied all five turnovers in the second half of the year, is best suited making plays in coverage against quicker targets. Combine both skills, and Bowles will hardly have to take either off the field.

The youth movement is in full effect when it comes to the last line of defense. All three starting cornerbacks are 23, and will either be entering their second or third season in the league. Arians must trust the process, hoping the unit that finished 30th in pass defense will improve with age.

The trio combined for 44 breakups and six picks. Entering the new season, it’ll be necessary for drives to end with turnovers instead of just deflections. The Buccaneers led the league with 96 deflections, yet finished 20th with 12 interceptions. With the addition of rookie Antoine Winfield Jr., the young get younger but better as well in coverage.

The son of former a Vikings defensive back, Winfield Jr. is simply a playmaker. In his final season with the Golden Gophers, the versatile safety was instinctive in coverage but showed durability against the run. Much like with Tyrann Mathieu in Arizona, Arians loves defenders who are aggressive no matter where they line up. With 83 total tackles, three sacks, and a conference-high seven interceptions, it’s safe to say Winfield Jr. fits the bill.

Jordan Whitehead should get the nod opposite Winfield Jr. thanks to his tackling skills. Improving against the run, he finished with 69 tackles, four for losses, and nine pass breakups from the box. Keep an eye on Mike Edwards to see snaps in three safety sets as the “rover” option in coverage.

Buy into the Buccaneers hype?

Tampa’s offseason will be considered a win with No.12 under center. We know Tom Brady has the innate ability to inspire those around him. Look at the effect he had on Rob Gronkowski, who is returning to the NFL after retiring. If Gronkowski can play at his 2017 form, this could be the most explosive offense in the NFL. Slight problem: Any team from the division could claim that title.

Atlanta’s set with a trusted tag-team in Julio Jones and Calvin Ridley for Matt Ryan. Teddy Bridgewater will have a trio of weapons with Robby Anderson, D.J. Moore, and McCaffery at his disposal with the Panthers. Let’s not forget the Saints added Emmanuel Sanders to alleviate the pressure off top target Michael Thomas as they chase the Lombardi Trophy one final time with Drew Brees at the helm.

The only way Tampa can make that jump is by having their defense step up. Should young talent flourish and depth be a minor concern, the Bucs will be in contention as a top 10 unit for years to comes. Offensively, the team can enter win-now mode, but the barometer of the season rest in the young defensive core.

Before firing the cannons at Raymond James Stadium, let’s see what time will do for Bowles’ bunch. If the stars align and the young core takes that veteran leap, Buccaneers fans will become the first franchise to watch their team play the big game in their backyard.