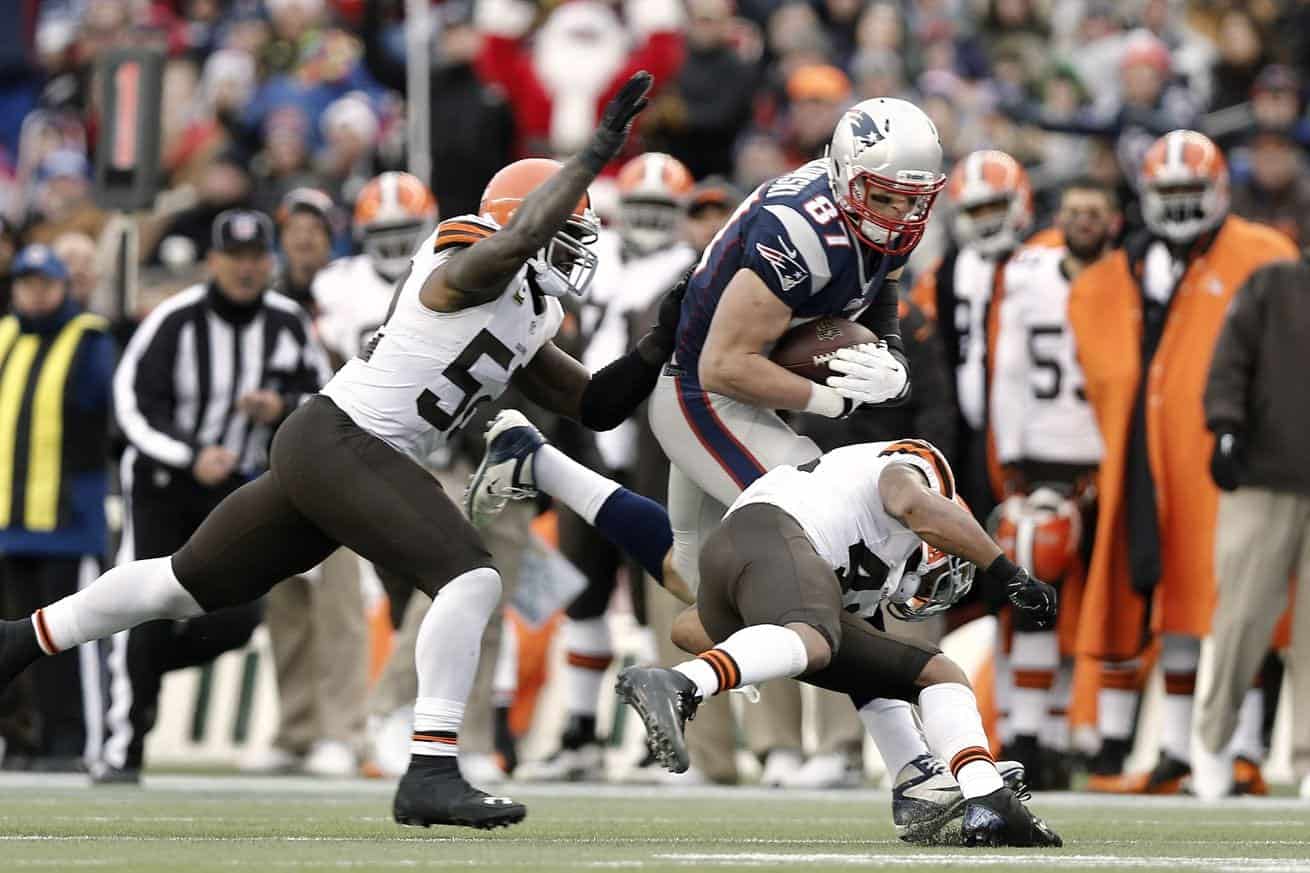 What's in this article? Click to show
Gronk’s return
Can Rob Gronkowski play at a high level for the Buccaneers?
Is he even the best Buccaneers tight end on their roster?

The biggest shock of the NFL offseason saw the Tampa Bay Buccaneers tempt Rob Gronkowski out of retirement. The four-time All-Pro tight end will reunite with Tom Brady for one last rodeo, but can he still perform at a high level after a year out of the league?

When Gronkowski retired from the NFL just over a year ago, it seemed impossible that we would see him hit the field again. Battered, bruised, and broken, a plethora of opportunities awaited him that wouldn’t subject his body and mind to the rigors of a 17-game season.

After helping the Patriots lift Super Bowl LIII, he had the opportunity to retire at the top of his game, something that most professional athletes never get to do, and he rode off into the sunset.

Yet, on April 22nd, the Patriots traded Gronkowski to the Buccaneers for a fourth-round pick in the 2020 NFL Draft, with New England sending a seventh-round pick to Tampa Bay to sweeten the deal.

At face value, the move has low risk and high reward potential for the Buccaneers. They add an all-time great at the tight end position and give Brady a familiar face to smooth his transition into Bruce Arians’ offense.

Can Rob Gronkowski play at a high level for the Buccaneers?

The question remains, however, whether Gronkowski can still perform at a high level.

To attempt to answer that question, I took a look back at the last three years of Gronkowski’s NFL career using Pro Football Network’s Offensive Share Metric (OSM) and NFL Next Gen Stats. If you’re unfamiliar with OSM, it is a metric used to define an individual player’s contribution to the overall offensive success of a team.

Due to an injury-shortened 2016, Gronkowski didn’t qualify for an overall OSM grade. However, taking an average of the games he did qualify for, he would have received an OSM grade of 35.38. Gronkowski had a catch completion percentage of 65.8% and averaged 21.6 yards per reception. If he’d have played the full year, it’s realistic to assume he would have hit another 1,000-yard season.

Gronkowski’s drop in grade from the previous year can be attributed to several factors. His catch completion percentage dropped slightly, but his average yards per catch declined significantly to 15.7 YPC. Gronkowski also ranked 109 out of 124 qualifying pass catchers in creating separation. This can be explained by the fact that only three other players (Antonio Brown, Marvin Jones, and Amari Cooper) were allowed less cushion than Gronkowski.

In his final season before retiring, there were further examples of decline appearing in Gronkowski’s game. His catch completion percentage fell again, to 65.3%, leaving him ranked 58th out of 126 qualifying pass catchers. Although he saw an increase in his ability to separate, he was also allowed far more cushion in 2018.

The most obvious marker of Gronkowski’s decline was noticeable even to the most casual observer out on the field. One mention of his name would usually conjure up images of an almost mythical man shaking off defenders and leaving them trailing in his wake, but that seemed to be lacking from his game. This was evident in the statistics with Gronkowski’s yards after the catch versus expectation dropping from +1.1 to +0.1 from 2017 to 2018.  Where he ranked 11th out of 124 in that metric in 2017, he ranked 65th out of 126 in 2018.

Is he even the best Buccaneers tight end on their roster?

Analytics point to a player on the decline, but where will Gronkowski sit on the Buccaneers depth chart? Will he be a better option than any other tight end on the Bucs roster?

If you compare Gronkowski’s 2018 season to O.J. Howard’s from an OSM perspective, then Gronkowski wouldn’t be the TE1 for the Buccaneers. Howard received an OSM grade of 36.27 as our TE13, whereas Gronkowski was our TE24 with a grade of 33.03.

However, Howard’s OSM grade regressed in 2019, barely grading higher than teammate Cameron Brate as the two Tampa Bay tight ends ranked 28th and 29th, respectively. The need to add depth at the position, especially with Brady being a quarterback who likes to rely on a tight end as a comfort blanket, is apparent.

Only time will tell what the Buccaneers will get from Gronkowski.

Despite some regression in his game in 2018, he still posted three elite graded performances that season.

The last time he stepped on a football field, Gronkowski received an elite 41.98 OSM grade, as he proved pivotal in New England’s Super Bowl win. After showing decline all season long, he caught six of seven passes for an 85.71% catch completion percentage. He tallied 87 yards, with a +1.1 differential in his yards after the catch versus expectation.

He proved in Super Bowl LIII that he can still perform.

If he can do that consistently in 2020, the Buccaneers will have got the trade bargain of the year, and Gronkowski could be in line to repeat his 2014 Comeback Player of the Year Award.