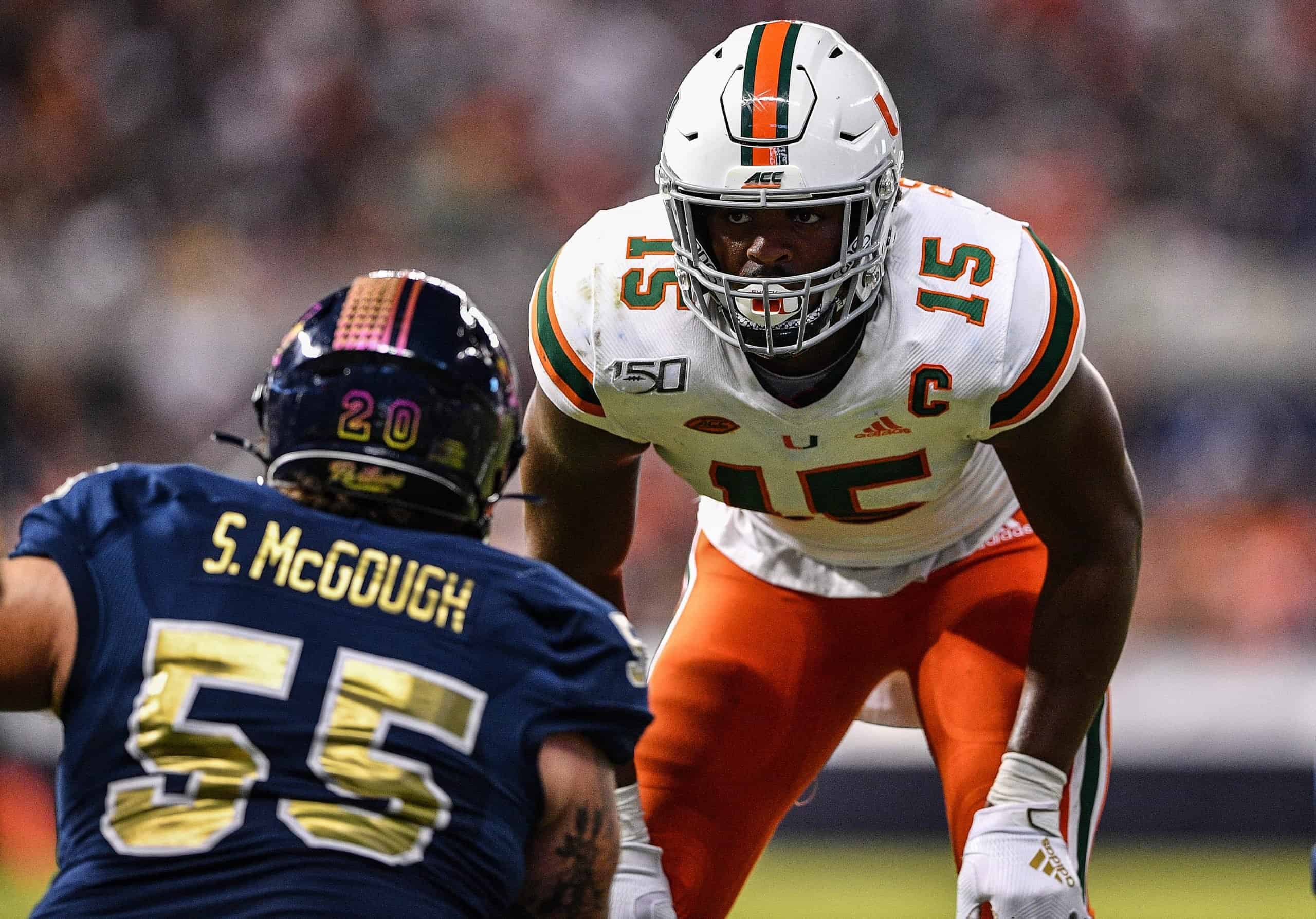 MIAMI, FLORIDA - NOVEMBER 23: Gregory Rousseau #15 of the Miami Hurricanes in action against the FIU Golden Panthers in the first half at Marlins Park on November 23, 2019 in Miami, Florida. (Photo by Mark Brown/Getty Images)

COVID-19 continues to make a substantial impact in the world of sports, as the 2020 college football season is in serious jeopardy. With an announcement expected as early as this week regarding the status of the 2020 season, some conferences, such as the MAC, have already announced their intentions to cancel their 2020 season. While not having a season will present a devastating financial impact on the schools and football programs, let’s not minimize the colossal ramifications it could have on potential 2021 NFL Draft selections. Make no mistake about it: If there is no 2020 college football season, many prospects will see their 2021 NFL Draft stock descend, or not even blossom at all.

Some players will be exempt from draft stock damage. For example, Clemson’s quarterback Trevor Lawrence is a near-lock to be the first selection in the 2021 Draft. Also, the status of the 2020 season should have no impact on where Ohio State quarterback Justin Fields and Oregon left tackle Penei Sewell are selected.

However, if you are North Dakota State quarterback Trey Lance and currently the front-runner to be the third quarterback selected in the 2021 Draft, a strong 2020 campaign could elevate your stock from a mid-first round selection to a top-five pick. The financial ramifications from such a jump are substantial, to say the least.

The 2020 college football season is on life support, but it’s not canceled yet. With that said, we’ve already seen top prospects such as Micah Parsons (Penn State), Caleb Farley (Virginia Tech), and Jaylen Twyman (Pittsburgh) opt-out of the 2020 season and move their focus to the 2021 Draft.

Unprecedented times will certainly make the duties of NFL front offices much harder. Let’s take a dive into three top prospects who could see their 2021 NFL Draft stock descend if there is no college football in 2020.

Coming off the heels of a stellar 2019 season, Gregory Rousseau was ready to cement himself as the best pass-rusher in college football during the 2020 season. Rousseau was nothing short of marvelous in 2019, as his 15.5 sacks ranked second in all of college football, only behind the phenomenal Chase Young, who was the second pick of the 2020 NFL Draft.

Another strong season would have likely cemented a top-five status for Rousseau. However, due to the uncertainty surrounding college football, he opted out of the 2020 season. While Rousseau will still likely be a first-round selection in the 2021 NFL Draft, no 2020 season could cost him significantly.

Rousseau is a ferocious pass-rusher but is far from a polished product. As Pro Football Network’s Nick Farabaugh points out: “The physical tools are eye-popping, but his pass rush plan is not fleshed out enough for my liking. He is a bit on the leaner side and could stand to add on some muscle to his frame. The biggest concern for me is his counters.”

In addition to the concerns pointed out by Farabaugh, Rousseau isn’t very stout against the run and needs to improve the technical aspects of his game. No 2020 season means that we have a small sample size when it comes to Gregory Rousseau, and we are not allowed to see if he can improve on his weaknesses.

When the dust settles, Rousseau will likely be a top-15 selection in the 2021 NFL Draft, but if he were able to showcase another season of staggering production, he would likely go much higher.

Jaylen Waddle was poised to be one of the most productive receivers in all of college football in 2020, but with the season in jeopardy, NFL scouts will have to rely on Waddle’s 2019 tape when they evaluate him for the 2021 Draft.

The 2021 wide receiver group has a chance to be historic, featuring the likes of Ja’Marr Chase (LSU), Rondale Moore (Purdue), Rashod Bateman (Minnesota), Devonta Smith (Alabama) and many more. If the 2020 season is canceled, it will be challenging to see Waddle as a top-15 selection in the 2021 Draft.

Waddle is one of the most electrifying players in college football, possessing game-changing speed. He is literally a threat to take it to the house every time he touches the rock. Unfortunately for Waddle, he hasn’t had many targets during his tenure at Tuscaloosa, as he was a victim of playing in a crowded Alabama wide receiver room, which featured 2020 first-round picks Jerry Jeudy and Henry Ruggs III.

While Waddle flashed that game-changing ability in 2019, the stat sheets show 33 receptions for 560 yards and 6 touchdowns. That type of production won’t warrant a top-15 selection for Waddle, which is where many are projecting him to go in early 2021 NFL mock drafts.

Waddle is one of those prospects that will be a better pro than collegiate player, but the lack of a 2020 season will certainly cause his 2021 NFL Draft stock to descend.

When it comes to prospects who were poised to see their 2021 draft stock explode, Alabama’s Christian Barmore leads the list. In limited playing time, Barmore flashed elite potential in 2019, securing 26 tackles, six tackles for a loss, two sacks, and two passes defended. In a talented 2021 defensive tackle class featuring the likes of Marvin Wilson (Florida State), Jaylen Twyman (Pittsburgh), and Tyler Shelvin (LSU), Barmore has the most talent and potential.

As I once mentioned in regards to Barmore, “In 2020, Barmore will get a chance to be a full-time starter, and many expect a meteoric rise like we saw from Quinnen Williams in his redshirt sophomore season at Alabama. Barmore possesses elite explosiveness and the ability to consistently disrupt the line of scrimmage. While his explosiveness is his best trait, his ability to win with power and violent hands also stands out.”

The only knock on Barmore that you will consistently see is a “lack of sample size”. Well, no 2020 football season only minimizes his sample size and puts him at an extreme disadvantage in comparison to other top 2021 defensive tackle prospects. If there is football in 2020, Barmore likely blossoms into a top-15 selection. If there is no football in 2020, Barmore should return to Alabama for the 2021 season.