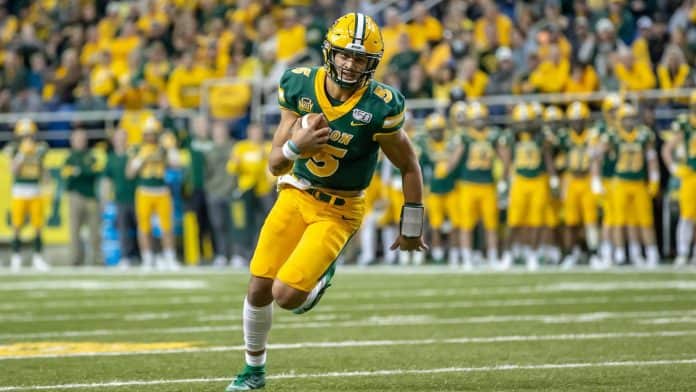 Trey Lance has quickly emerged as a top prospect in this year's class. Nick Farabaugh examines his best NFL fits.

Trey Lance has taken the NFL Draft landscape by storm after a fantastic freshman season. In that season, Lance threw a total of zero interceptions and led the North Dakota State Bison to yet another national championship. While Lance has dazzled analysts and fans alike with beautiful tight-window throws and shifty, athletic quarterback runs, the conversation around his draft landing spot has been a mixed bag.

Whether people rank him over Justin Fields and Trevor Lawrence or not, it seems most agree Lance has holes in his game he still must fix. That means he needs coaching. So, the landing spot will matter. Here are Trey Lance’s best realistic NFL fits that will allow him to achieve his potential.

The Raiders have needed a spark at the quarterback position for a while now. Derek Carr is a pretty solid game manager, but this is his year to prove he can take them to the next level. If he can not show that, a guy like Lance would seriously grab Jon Gruden’s attention.

The reason Lance blends in so nicely with the Gruden offense is that his skillset and the offense North Dakota State runs, to a degree, fit in nicely. Lance’s ability to sling the pill will fit in nicely with an attack that is looking to go more vertical than ever. He absolutely has the arm to push it out there, and while he has some lapses in deep accuracy, there are consistently big-time hits in that area.

Then there is the fact that the west coast nature of the Gruden offense can bleed itself into Lance’s natural offense at North Dakota State. While not a full-on west coast team, Lance certainly has experience in that quick passing game, including the quick slants and processing necessary.

I will not outright call this Lance’s best fit, but he would have a good offensive coach, a legitimate group of weapons, and a growing offense line that he can depend upon. Lance would have the chance to thrive in Sin City.

The Steelers are a team that could be in contention for Lance if they falter this year. Now, that is not easy for a team with a lauded defense and a lot of young, emerging talent on the offensive side of the football. However, in the past, we have seen teams package together a great package to trade up for their guy. Just ask the Chiefs when they traded up for Patrick Mahomes.

Listen, the Steelers are a bastion of stability in the NFL. It is the same qualities that could prevent the Steelers from being in the range that makes them attractive. A fun supporting cast, a great defense, and a stable coaching staff would give Lance a friendly environment to grow. He may not even have to be the starter at that point. Sitting behind a quarterback like Ben Roethlisberger would only help Lance, who has flaws to clear up.

To unite Lance with a rising young offensive star in Matt Rhule is intriguing. The Baylor scheme and North Dakota State scheme are vastly different. The Bison run a lot more of heavy personnel with a heavy reliance on 12 personnel (2 WR, 2 TE, 1 RB). At times, they will spread it out and fix it into 11 personnel (3 WR, 1 TE, 1 RB).

However, the Rhule scheme looks more like a heavy 10 personnel scheme (4 WR, 1 RB) than anything that Lance ran, at least from a running perspective. Baylor and Rhule meant to throw the rock over the field, but the Bison are not too heavily reliant on that. Still, there is a nice nucleus for Lance to work with here.

For one, Rhule does a great job of easing the job on his quarterbacks and getting them into a rhythm. A lot of quick hitters and simple reads through RPOs that can take advantage of Lance’s athleticism and quick mental processing will aid him in the transition. With guys like DJ Moore and Christian McCaffrey around too, Lance would have a few weapons to work with.

Another team that is built for the playoffs but has a similar quarterback situation. Phillip Rivers is not getting any younger, and while Jacob Eason is there, the Colts very well could bet on the upside of Lance if they prefer his film to that of Eason’s.

Now, for the fit, Frank Reich is a great offensive coach that is creative and, most importantly, meshes his coaching style with the personnel he has. The Reich offense is more similar to the North Dakota State one than that of Rhule’s, and Lance would have a smoother transition into a scheme full of 12 personnel and some RPOs mixed in as well.

With a nice slate of weapons and an incredible offensive line, Lance comes into a strong position to feel comfortable here. Not only can he learn extremely efficiently with high-level players, but for a guy that struggles with mental errors, having an offensive guru and former NFL quarterback in Reich teaching him can only help.