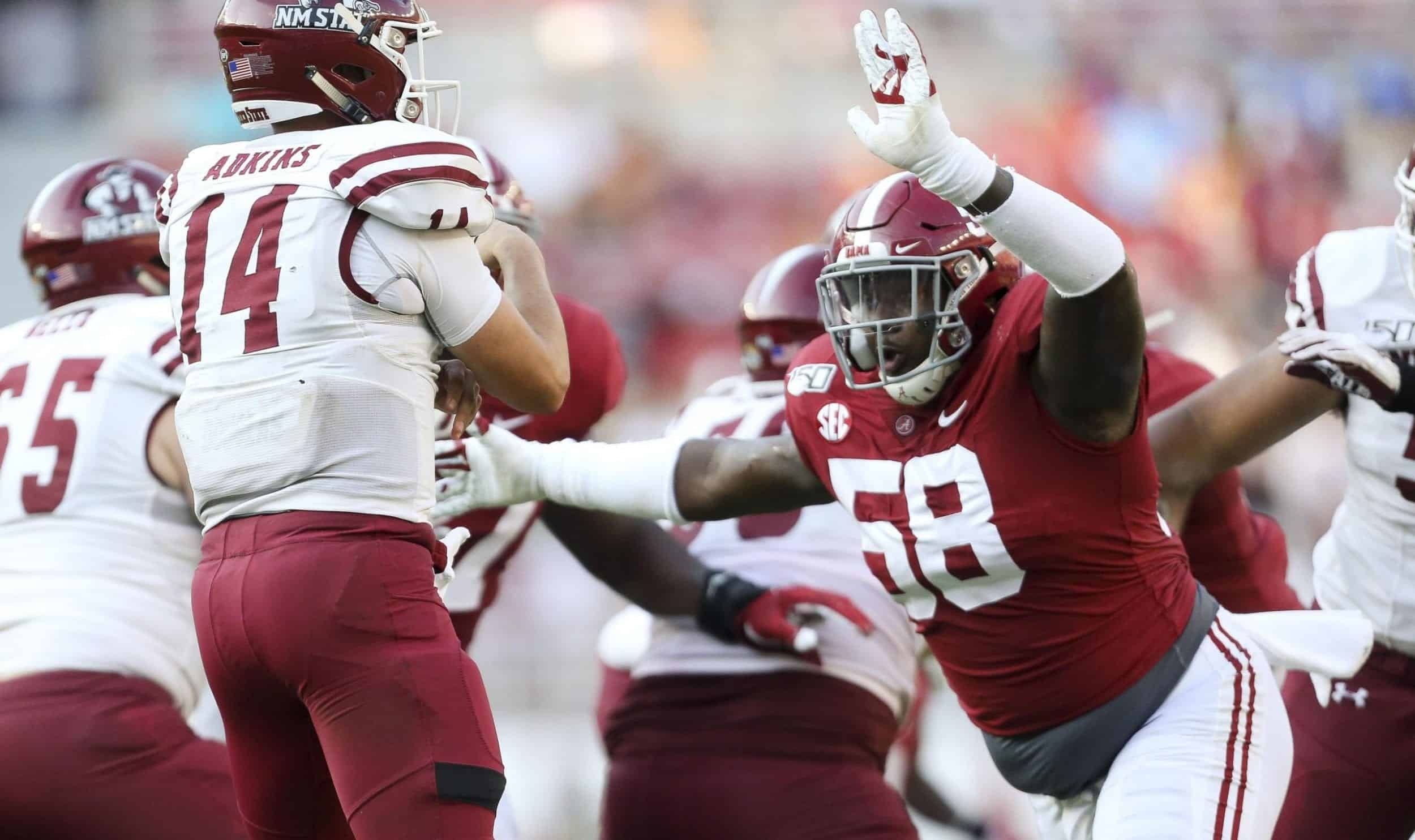 When it comes to the 2021 defensive tackle class, Florida State’s sensational prospect Marvin Wilson headlines the group for many. In a recent article on Wilson, Pro Football Network draft analyst Matt Valdovinos broke down his skill set well: “Wilson’s game is predicated on his burst off the line and making plays in the backfield. He’s long and very explosive, while also showing off quick hands to keep himself clean.”

Prior to a season-ending hand injury last November, Wilson was the best defensive player in the ACC and possibly the best defensive tackle in all of college football. When the dust settles, Wilson is a top-20 pick in the 2021 NFL Draft, but he will face serious competition for the crown of “DT1” in 2020.

Alabama’s future superstar Christian Barmore is not a household name just yet, as the redshirt sophomore doesn’t have a large sample size. With that said, it’s only a matter of time before he is recognized as one of the best defensive linemen in college football and a future top-10 pick.

Albeit only registering one start in 11 games in 2019, Barmore’s 26 tackles, 2.0 sacks, 6.0 tackles for a loss, and two passes defended helped him become a freshman All-SEC team selection by the league coaches. According to Pro Football Focus, Barmore’s 20.8% pass-rush win rate in 2019 ranked first of all defensive tackles, edging out San Francisco 49ers’ first-round pick Javon Kinlaw.

What Barmore needs to do next year

In 2020, Barmore will get a chance to be a full-time starter, and many expect a meteoric rise like we saw from Quinnen Williams in his redshirt sophomore season at Alabama. Barmore possesses elite explosiveness and the ability to consistently disrupt the line of scrimmage. While his explosiveness is his best trait, his ability to win with power and violent hands also stands out.

In the clip below, pay attention to #58 on the defensive side of the ball. You will see how Barmore utilizes his hands to disengage from the Texas A&M centers’ block.

In a shocking turn of events, Alabama has another stud Defensive Tackle ready step up into a prominent role this season. If Christian Barmore (#58) can turn the flashes into consistent production we could see a Quinnen Williams-esque rise for the explosive DT. pic.twitter.com/h74I8HAlto

If Christian Barmore can play at the level he showcased in limited snaps in 2019 for the entire 2020 season, he could easily surpass Marvin Wilson as the best DT in the 2021 class. In fact, he is talented enough to be a future top-5 pick.

When you watch film on the LSU’s talented defensive tackle Tyler Shelvin, the first thing you notice is his enormous size. He is a monster of a man and his job is to stop the run, so don’t expect him to fill the box score with gaudy statistics. When it comes to stopping the run, Shelvin is a space-eater, who consistently demands double teams and can control the line of scrimmage. Shelvin’s ability and willingness to absorb double teams allows his teammates to make plays unscathed. He was the highest-rated run defender in the SEC in 2019.

In an earlier Pro Football Network article on Shelvin, Bill Riccette noted: “[Shelvin] sure can move quickly for someone that big. Shelvin has great get-off from the snap, is consistently quick off the ball, and more often than not, is the first player moving after the snap. There are not too many players that can do all that at almost 350 pounds.” Shelvin’s combination of size, power, and quickness make him an enticing 2021 draft prospect.

The clip below highlights Shelvin’s ability to evade blockers with his exceptional quickness to make a tackle behind the line of scrimmage.

Tyler Shelvin (NT 72) from LSU is a redshirt sophomore we’ll talk about more in the future. 6’3″ – 346 pounds and working his way to the backfield. pic.twitter.com/dATNNnRCOD

Being a true nose tackle isn’t sexy, but Shelvin’s ability to clog the middle of the field is elite and his ability to dominate the opposition will land him high on draft boards. He will find his name called in Round 1 of the 2021 NFL Draft should he declare.

As I pointed out in my piece on some of the top Pittsburgh Panthers prospects to watch, Jaylen Twyman emerged in a big way in 2019, producing 41 tackles, 12 tackles for loss, and 10.5 sacks. He finished third in the ACC in sacks, only behind Miami’s Gregory Rousseau and Wake Forest’s Carlos Basham Jr., which helped him earn first-team All-ACC honors.

Like former Pitt great Aaron Donald, Twyman comes in a bit undersized but makes up for it in spades with his explosiveness and interior pass-rush ability. He utilizes his hands exceptionally well and maintains tremendous pad level, making it a tough assignment to block him. He isn’t a one-trick pony by any means, as Twyman is a force against the run as well.

If you want an example of Twyman’s exceptional hand usage, give the video below a gander. He completely overwhelms the opposing offensive guard to secure a sack.

Pittsburgh IDL Jaylen Twyman is super interesting. Just a RS SO but so athletic on the inside. Nice arm-over move here for a sack. pic.twitter.com/M9ObPsPjmD

If Twyman can repeat his impressive 2019 season, he will be a surefire top-25 selection in the 2021 draft. His ability to create an interior pass-rush is unparalleled in this draft class, and because of that, he will be a blue-chip prospect on many draft boards.